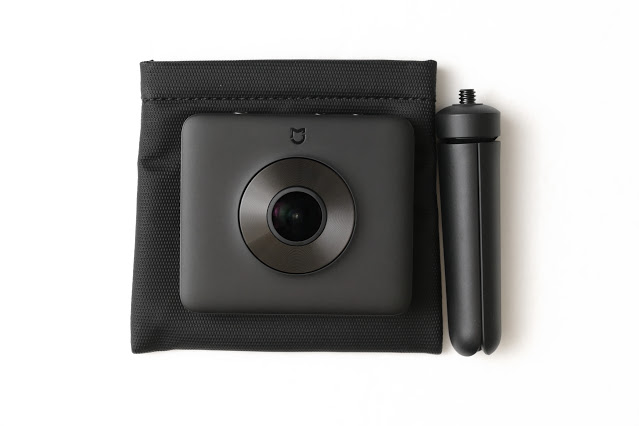 I just received my order of the Xiaomi Mijia Mi Sphere 360 Camera from GearBest!  Here are my first impressions.


Update:
Part 2 of my first impressions (with unboxing, sample 360 video, and image stabilization preview) is here.
Here is a comparison / review of the Xiaomi versus the 2017 Gear 360.  It also has a guide for the viewing and exporting from the Xiaomi.

The box was surprisingly small.  It included:
– the Mi Camera
– a sleek carrying pouch (seems made from a water resistant material, but with a fabric interior lining)
– a mini tripod / handle
– micro USB cable
– instructions and warranty card.

The Mi Sphere feels sleek and very well made.  The edges of the Mi Sphere are metal, which not only contributes to a solid feel but I believe also helps dissipate heat.  The matte black finish reminded me a lot of the Ricoh Theta, but with a unique credit card-like shape. 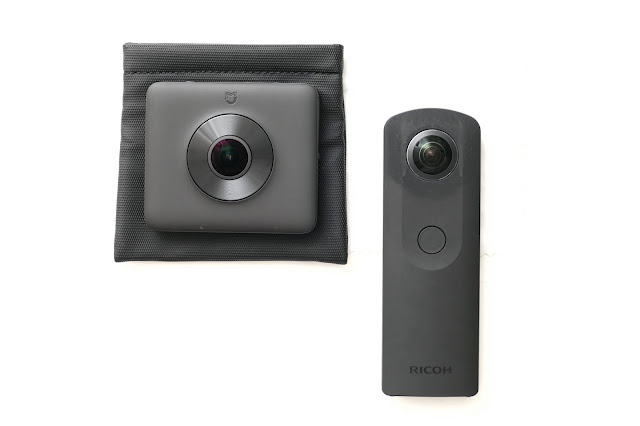 The Mi Sphere Camera is very slim.  It seems slightly slimmer than the body of the Ricoh Theta, although the distance between the lenses is almost the same. 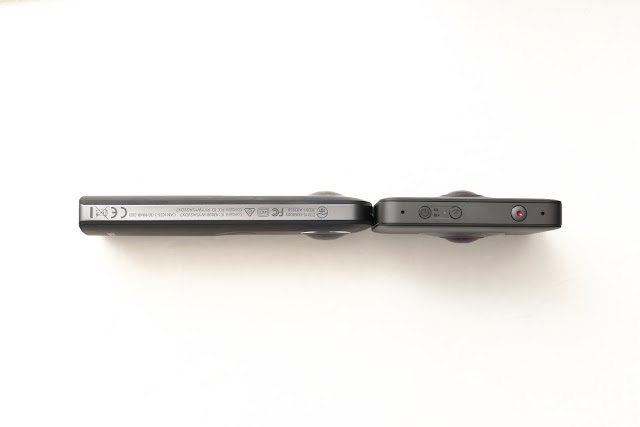 The buttons on the Mi Sphere feel very good and have a positive feel, not at all mushy.  The controls are elegant and intuitive.  There’s a power button that also doubles as a mode switching button, a wireless button, and a shutter button.  There are hidden LED indicator lights that are invisible when they are not lit (another similarity with the Theta S).  My only complaint is that there doesn’t seem to be a self-timer mode without the app. 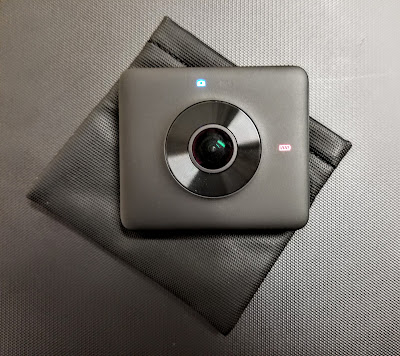 One difference from the Theta is that the Mi Sphere has a removable Micro SD card.  There’s a Micro USB port but no micro HDMI port.
There is a standard 1/4-20 tripod insert at the bottom, made of metal.  The included mini tripod has a similar design to the tripod that came with the original Samsung Gear 360.  It’s made of metal, is spring loaded, and has rubber tips for friction. 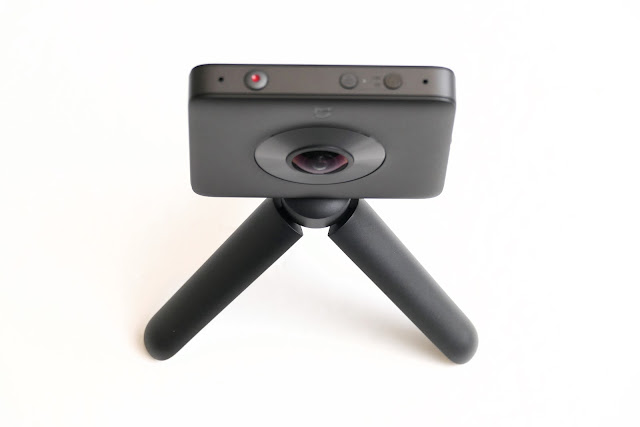 One thing that is a little unusual is that the manual included in the package is all in Chinese.  I am hoping that when it is eventually sold in the US, that there will be an English manual for it.
IOS AND ANDROID APP
The Mi Sphere has an app for both iOS and Android, which you can find by scanning a QR code in the manual.  The iOS app is here.  The Android app is here.  Both apps were in English on my phones.  The iOS and Android apps look identical.
Connecting the camera to the app was relatively simple, and there’s a graphical tutorial in the app.  You just turn on the Wi-Fi on the camera, connect to it with your phone, then tap on the camera icon on the app to connect.  One comment is that my phone was warning me that internet access isn’t available with this wi-fi “network.”

The interface is simple.  At the bottom, there’s a gallery button, shutter button, a toggle between photo and video.  Above that, you’ll see self-timer (for photo mode) or a short video mode and time-lapse mode (for video). 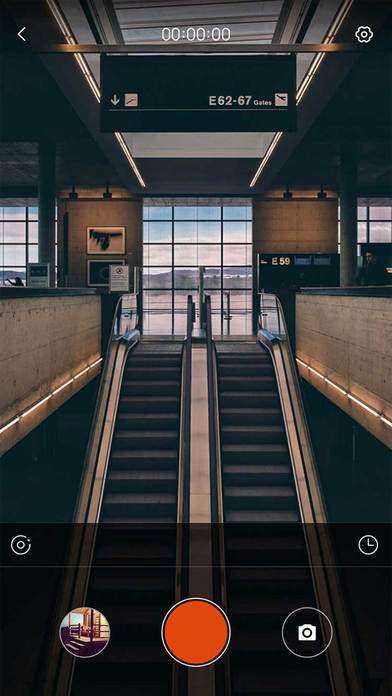 On the upper right corner are the settings.  Yes it has manual exposure, shutter priority, and ISO priority!  Moreover, the shutter speed can be as slow as 32 seconds — enough for night sky photos!  ISO is as low as 50, which can let us use long exposure shots in brighter conditions!

One unusual option is “recording cycle.”  I don’t know exactly what it is, but it seems to be the image stabilization.

I took a few test shots. Here is a sample photo:

Here are my observations:
+ Sharpness is very good, with plenty of detail, although part of the sharpness could be because the photos seem sharpened by the internal JPG processing.
+ Unlike the Theta, the lens appears to be sharp edge to edge (the Theta softens toward the stitch line).
+ exposure is spot-on
+ Colors appear natural, with accurate hues.
+ very good contrast level, yet shadows do not appear too dark. Very nice balance of highlights and shadows in my opinion.
+ excellent flare resistance
+/o The stitching looks pretty good although it’s not perfect, and there is a little bit of smearing and doubling at the stitch line.
o dynamic range appears similar to the Theta, with some noise / grain in the shadows.  Not sure yet re highlight detail but so far I haven’t seen anything impressive.
– It has chromatic aberration like the Ricoh Theta.
– vertical correction seems to be inaccurate.

In short, my initial impression is that the Mi Sphere 360 has some of the best-looking photos for a consumer 360 camera.  Combined with exposure controls that are as good as those of the Theta, this could be an excellent 360 photo camera.

For videos, I haven’t had the chance to upload them yet but on the phone, they look darn good.  I’ll post them in a while.

VIEWING AND SHARING
Photos and videos are not stitched in the camera.  However, when I review them on the app, I can view them stitched without having to wait.  It’s only when I download them from the camera to the app that I do have to wait a while because it seems to be stitching and downloading at the same time.

Here are the sharing options for videos:

It’s strange not to see YouTube as an option for sharing to video.  Oh well.

Update:
Part 2 of my first impressions (with unboxing, sample 360 video, and image stabilization preview) is here.
Here is a comparison / review of the Xiaomi versus the 2017 Gear 360.  It also has a guide for the viewing and exporting from the Xiaomi.

If you have any questions, please leave them in the comments and I’ll do my best to answer.  And of course, I will include the Mi Sphere in my mega comparison (with at least 12 cameras).  The Mi Sphere is available from GearBest.