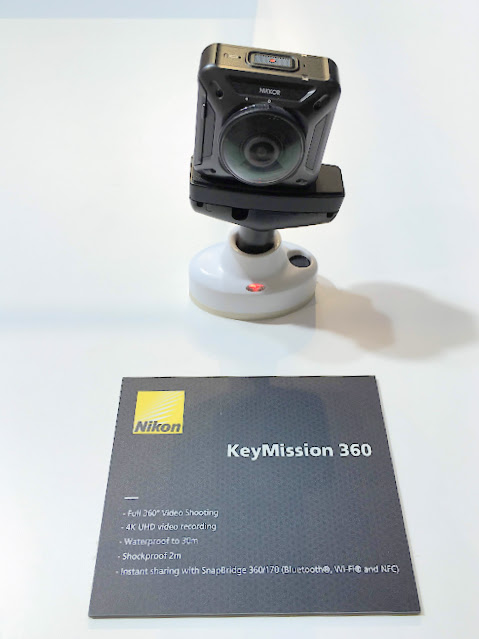 Here’s a hands-on report on the Nikon Keymission 360 at Photokina 2016 from our correspondent in Germany, Sven Neuhaus, a software developer, writer and VR / 360 video enthusiast.

Photokina in Cologne, Germany is the world’s largest exhibition for photography and Nikon chose this event to introduce its new Keymission action camera line.  Nikon is putting a lot of marketing muscle behind its entrance into the action camera and 360° camera markets. Their Keymission booth greets the Photokina visitors before they have even entered the event and in hall 2.2, the new cameras have been granted a sizeable chunk of the large Nikon booth.

The Keymission action camera lineup consists of three cameras; we will focus on the Keymission 360 that was revealed in the beginning of the year since it’s the only camera that allows for 360° recording.

Nikon showed working cameras at their booth, however they still had non-final firmware installed, so they did not want us taking pictures on our own MicroSD cards just yet. Also, the mobile app to control the camera was still missing at Photokina. Nikon revealed that the app will allow control of the white balance and ISO settings.
﻿

In the US, if you preorder the Keymission 360 directly from Nikon right now, you will get the accessory pack for free. Unfortunately there is no such offer for Europe. The camera is expected to be out in Europe in November. In the US the release date is October 26th.

The camera’s two f/1:2.0 8.7mm lenses are protected by plastic transparent lens covers that can easily be replaced if they ever get scratched. For underwater recordings, there are planar lens covers that allow successful stitching even with the higher refraction factor of water. The Keymission 360 can be used at a depth of up to 30 meters without any additional enclosure. The red rubber sleeve you see on the picture makes the camera less slippery while handled underwater.

The camera will – for now – not provide unstitched images, however there are plans to allow for pictures to be taken by only a single 185° lens, something the Samsung Gear 360 also offers.

One of the few drawbacks of the camera is the frame rate for 4K video which is limited to 25Hz which should be considered the bare minimum. At lower resolutions, the camera offers higher framerates, but those are inadequate for virtual reality viewing.

With its good in-camera stitching, the impressive water proofing, the quickly removable lenses, a removable battery and an affordable price point, we believe that Nikon has a very attractive offering in the 360 camera market segment.

[Mic: I’ve ordered a Keymission 360 and will post a review as soon as I get it.]