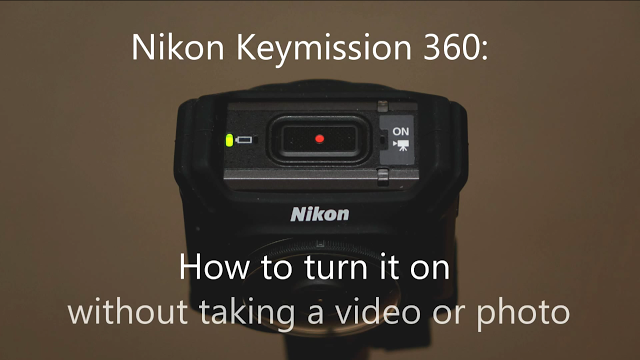 Here’s a technique to turn on the Nikon Keymission 360 (reviewed here) without recording a video or taking a photo.

The Nikon Keymission 360 has an unusual characteristic: it uses the video recording button or shutter button as a power button.  One benefit of this approach is that the Keymission is ready to record videos or photos almost immediately from standby, with nearly zero startup time.  Even with the Keymission on standby, you can press the record button and it will start recording a video (or photo) right away.

On the other hand, this also means that if you simply want to turn on the camera, you will likely end up recording a video, which you have to stop and later erase.

Fortunately, it is actually possible to turn on the Keymission without recording a video or photo.  To do so, simply hold down the video button for about 4 seconds until the yellow green LED lights up — then let go immediately.  That’s it!  (Caution: do not hold it down after the yellow green LED lights turn on or else it will go to wireless pairing mode after about 7 seconds.)