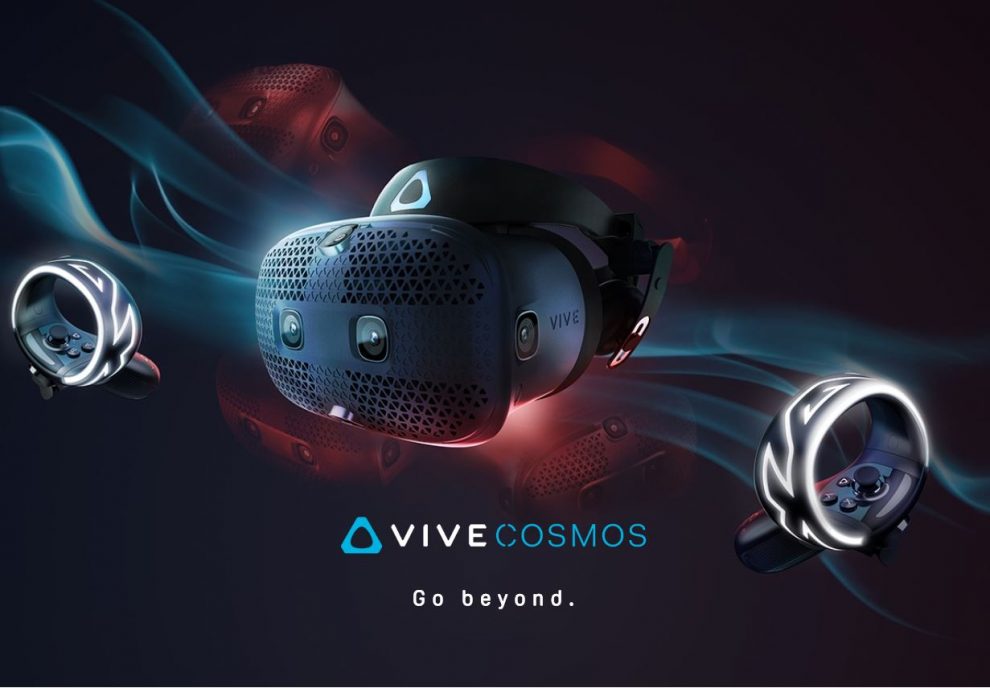 HTC posted a new video of the redesigned Vive Cosmos headset revealing significant changes from the version shown in January at CES.

By comparison, here was the version shown in January:

Here are at least some of the changes:

Six cameras instead of four cameras.  The previous Vive Cosmos had four cameras (two in front, and one on each side).  The new Vive Cosmos has two more cameras facing above and below it.  There is also a sensor in front which may be an ultrasonic proximity sensor.

Tethered instead of wireless.  The new Vive Cosmos has a cable whereas the previous one had no visible cable.  The Vive Cosmos appears to be a desktop VR headset, seemingly irreconcilable with HTC’s previous statement that the Vive Cosmos could be controlled either by a desktop or a smartphone.  It is not clear if the redesigned Vive Cosmos will still be able to connect to a smartphone given that it has a cable (presumably for USB and HDMI or DVI).

Grill cover.  The previous Vive Cosmos had a smooth cover whereas the new one has a grill, possibly for better resistance to overheating.

Removable cover.  The new Vive Cosmos has a removable cover, which is unusual given that there are two cameras on the cover, with no obvious connections.  It also leads us to wonder why the cover is removable.  However, with the cover removed, we can see that there is a rectangular space that may allow for additional accessories.

Prior to this reveal, HTC said that Vive Cosmos would be fully compatible with SteamVR.  It seems that Vive Cosmos will be a successor or possibly a replacement for the HTC Vive, and a direct competitor for Oculus Rift S rather than Oculus Quest.

In terms of cost, having more cameras may mean a higher cost than Rift S (which has 5 cameras).  Moreover, HTC’s products have consistently been higher than Oculus’, so I’m expecting it will be $100 to $200 more than the Rift S, i.e., around $499 to 599.  If it somehow has a standalone capability (with its own processor, memory, etc.) then it will almost surely cost more than that.

HTC said that Vive Cosmos will be available Q3 2019.  Here is the official page.