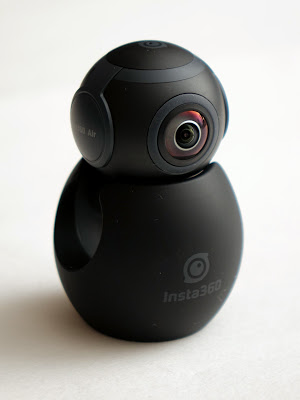 I brought the Insta360 Air with me when I went to Santa Monica last week to test 360 live streaming with Periscope 360 and the Insta360 Nano.  There was a program to celebrate the Lunar New Year, featuring a Chinese lion dance and a Korean fan dance.  They also had some musical performances and I took some videos of those performances using the Insta360 Air.

The videos were recorded in Insta360’s .INSV format, which I exported to MP4 using Insta360 Studio using the “Superb” quality setting.  I then combined two videos into a single video using Magix Video Edit Pro Plus 2017, which has 360 video editing capabilities.  The videos were exported and then uploaded to YouTube.

Some caveats:
1. The Chinese dulcimer (yangqin) was played live, and the music was amplified through speakers, as was the lady singing, therefore the sound quality is limited by the speaker system.
2. I’m only running the prerelease version of the Insta360 Air app.  The video and audio quality is not necessarily representative of the video and audio quality of the release version.
3.  Third, I edited the video in Magix Video Edit Pro Plus 2017 then uploaded to YouTube (which has high compression), therefore it may not reflect the original video or audio quality.

With those caveats, here’s the video:

You can see a larger version here.

I think that the sound quality was pretty good, and captured the dynamic range of the music better than I expected for an on-camera microphone.  The audio also has good fidelity and it sounded pretty similar to the sound when I was there.  Of course it is also possible to use an external recorder for maximum audio quality.

The Insta360 Air was successfully funded on Indiegogo (more than 12 times its fundraising goal). It will be available on Amazon in April.  In the meantime, for iPhone, Insta360 also offers the popular Insta360 Nano, a 360 camera accessory for the iPhone.

The future of PPV events is in 360 and VR with Next360
TUTORIAL: How to do a 360 live stream on Twitter and Periscope with Periscope 360
Comment