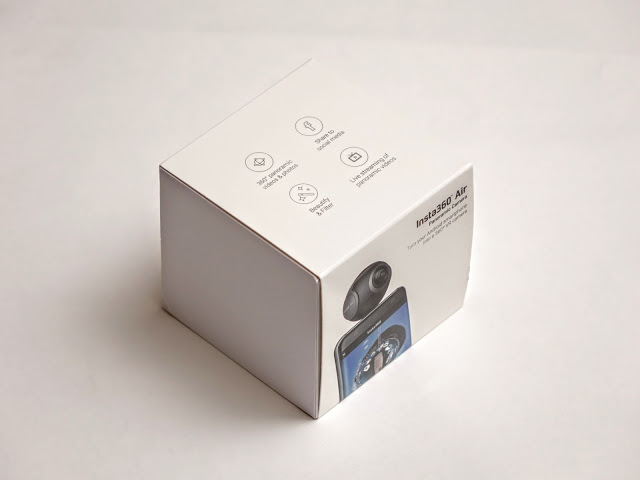 The Insta360 Air is here!  I was actually the first person to order it on Indiegogo and to show their appreciation, Insta360 has sent me the very first retail unit, ahead of the official release.  Here are my first impressions.

However, rather than merely creating an Android version of the Nano, the Air is a totally new design that is even simpler than the Nano.  Whereas the Nano could be attached to an iPhone or used independently as a 360 camera, the Air is purely a smartphone accessory.  This further tightens its integration with the smartphone.  For example, there’s no need to charge it — it simply uses the phone’s battery.  There’s no need to sync photos either — photos are saved directly into the phone.

With these design changes, Insta360 has been able to make the Air much smaller than the Nano (itself a compact 360 camera) and almost half the price.

WHAT’S IN THE BOX
Update: here is an unboxing video:

Larger version of the video here. 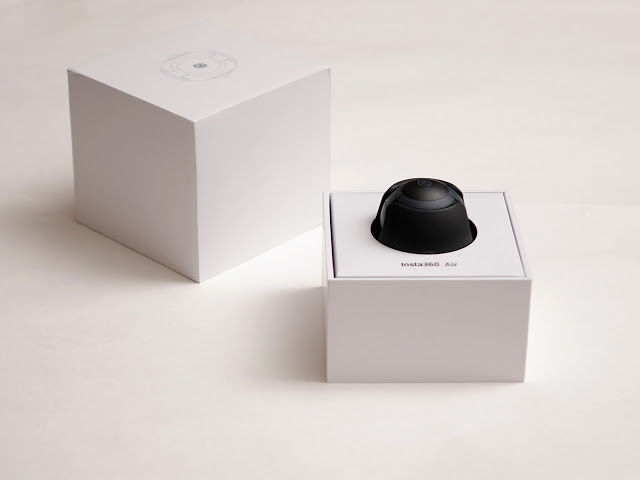 The cube-shaped box looks very sleek.  After you remove the outer sleeve, you’ll find a handsome box with a clean-looking minimalist design.  As you lift the cover, you’ll see the Insta360 Air nestled in a receptacle.

The Air comes with a silicone rubber cover that serves both as a lens cap / camera case and a stand: 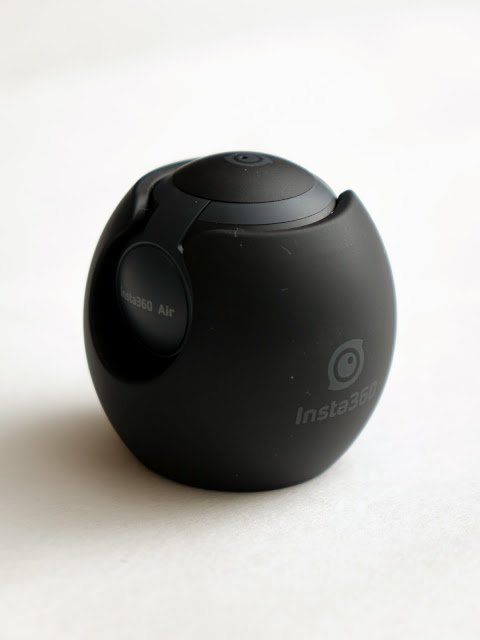 The Insta360 Air itself is tiny, about the size of a ping pong ball.  It has a somewhat futuristic looking design that reminds me of a Star Wars droid. 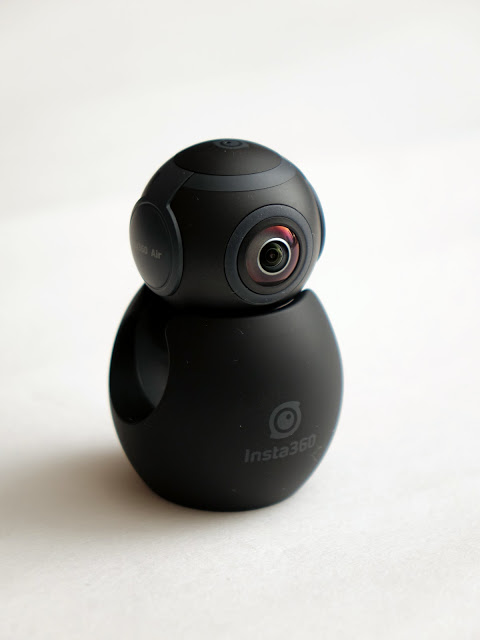 The Insta360 Air has cool details.  For example, on top of the camera is the Insta360 logo: 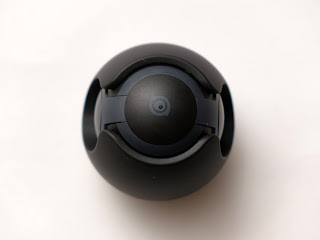 The dot in the middle of their logo also serves as an LED status light for the camera: 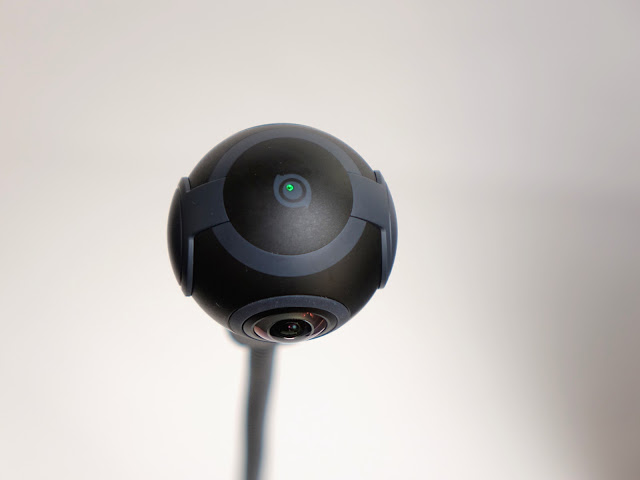 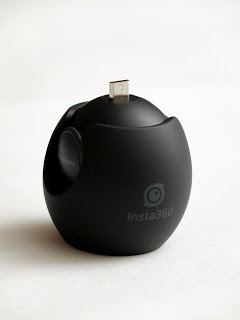 Here’s how it looks on a Samsung S6.  One thing I like about the Air better than the Nano is that because the Air is much smaller and doesn’t extend toward the body of the phone, it is possible to use almost any smartphone tripod adapter. 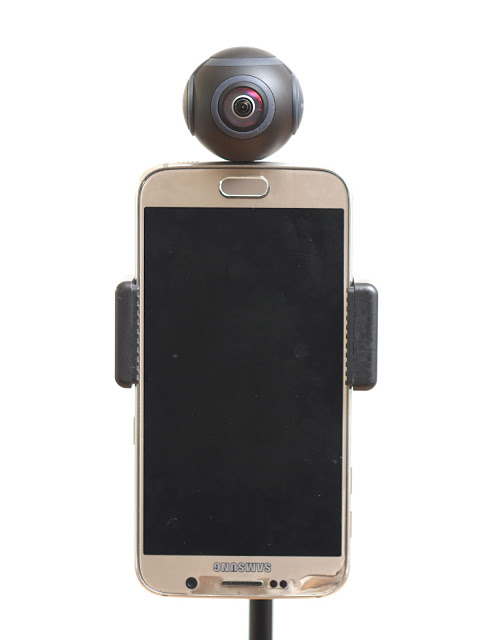 The box also includes a quick start guide (in several languages), warranty card, and a special semi-rigid USB adapter that can also hold the Air upright when being used as a webcam (note: the USB adapter has to be used vertically — it won’t support the Air diagonally or horizontally). 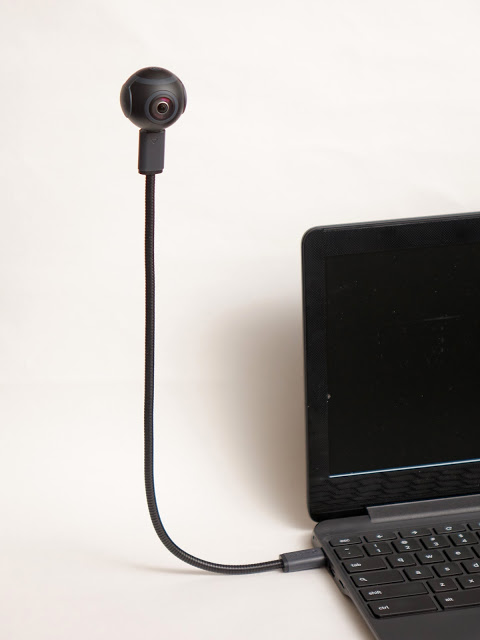 Speaking of warranty, it’s not 60 or 90 days but one year, just like Apple iPhones for example.

Another item you’ll find in the box looks like a tiny screw.  It’s actually a pin used when installing the firmware.  You can see that beside the USB port there’s a tiny hole where the pin is inserted. 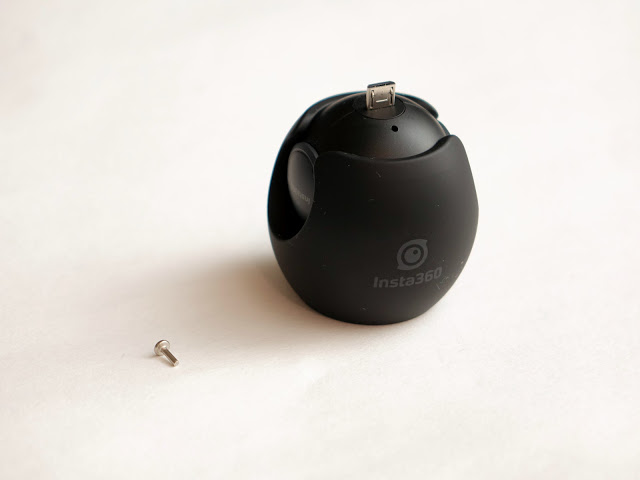 When used, the pin should be inserted vertically (not radially). 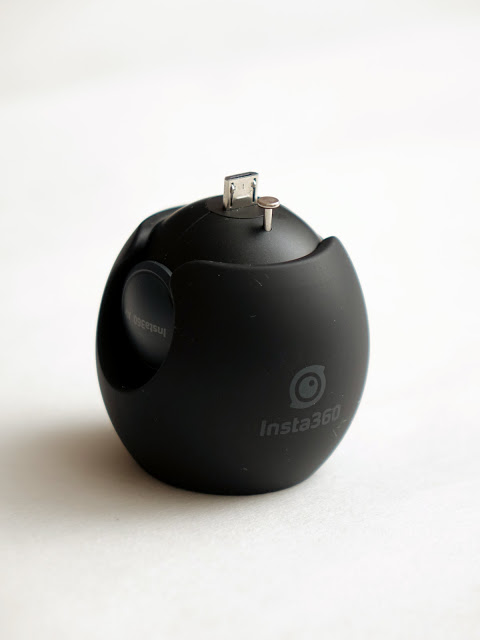 PERFORMANCE
So how does the Air perform?  Like I said, it hasn’t been officially released yet, so I’m only using the pre-release version of the app (version 0.5.2 build 20161220), which doesn’t have all of the functions of the release version yet.  The [prerelease] app is available for download from the Google Play store.

However, so far it seems similar to the Nano in terms of controls and usability.  As with the Nano, inserting the Air automatically launches the app (assuming you’ve installed the app). 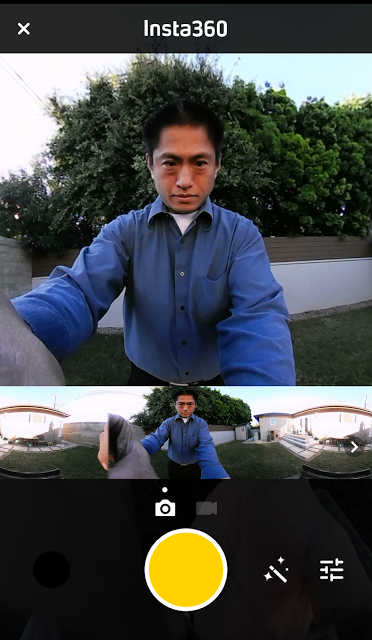 In this early version of the app, there are two modes – photo and video, but in the release version, there is a third mode for livestreaming.

The live preview is fully spherical, and you can swipe it to look around.  In this version, there are controls for a self-timer (3 seconds, 5 seconds or 10 seconds).  There’s also exposure compensation (from -2.5EV to 2.5EV, in 1/4 stops).  There’s an adjustable beautifying filter (to make wrinkles and skin blemishes less apparent) and a collection of Instagram-like filters, which are both reversible.

In terms of image quality, so far it looks similar to the Nano with pleasant colors and contrast, except that the stitching seems better.  I’ll have to test further to see.

As for the video, the Air’s resolution is dependent on your phone’s processing power.  For powerful phones such as the Samsung S7, the resolution is 3008 x 1504.  For other phones, the video resolution is 2560 x 1280.  My phone (Samsung S6) can only manage 2560 x 1280 but interestingly enough, I haven’t noticed the difference compared to videos from the Insta360 Nano (which has 3008 x 1504 resolution).  Again, I would have to conduct tests to see.

Finally, I haven’t gotten to test the livestream capabilities or the other functions.  I will post an in-depth review when I get the release version of the app.  In the meantime, I will take some test photos and videos for comparison with the Nano.  But so far, the Air looks very promising and looks like an amazing value for its $119 MSRP.

As a reminder, at the time of this writing, it’s still possible to get the Insta360 Air with a 20% discount through Insta360 Air’s Indiegogo crowdfunding page, but there are only a few hours left (it ends January 26, 11:59pm Pacific Time).

Update: here are initial sample photos and a video.

WHERE TO BUY
Insta360 Air is now available on Amazon!