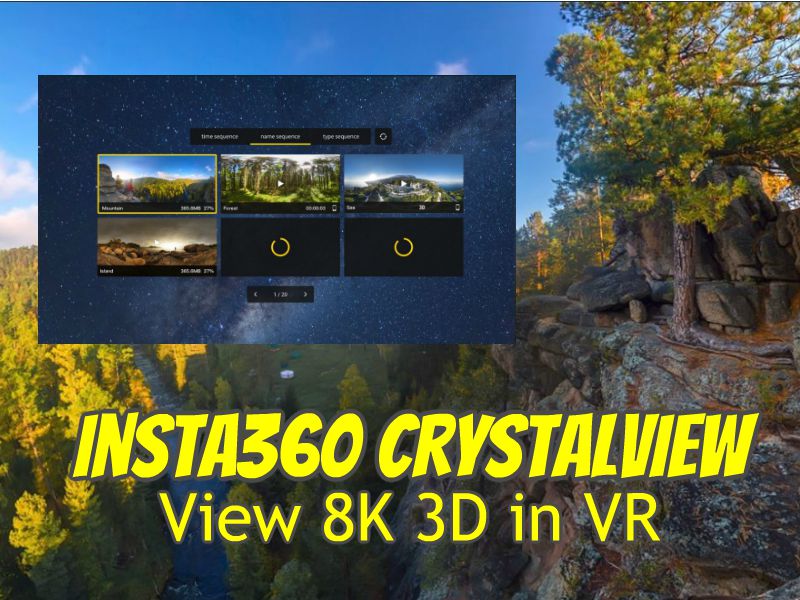 When Insta360 announced the Insta360 Pro 2, they also announced the release of the Insta360 CrystalView technology to view 8K 3D 360 videos in VR using with what seems to be fixed foveated rendering.  In any case, the app for viewing with CrystalView is now available, and it’s called Insta360Moment (Insta360 Moment).  Why didn’t they just call the app CrystalView?  Beats me… Anyway the app is now available for download for Oculus Go, Samsung Gear VR, iOS, and Android.

Please note that for full resolution the app requires a Snapdragon 835 (e.g. Samsung S8) or better.  On Oculus Go, which uses the Snapdragon 635, the maximum resolution for videos is 6K 3D or 8K 2D.

The app is called “Insta360Moment” (no space).  For Gear VR, it’s easiest to find the app on the Oculus app on your phone.  For Oculus Go, look for the app in the Store from the main menu.  For iOS, it’s on the App Store.  For Android, it’s on Google Play store.

For Oculus Go, you may need to perform an update.  To update Oculus Go, connect the Oculus Go to your smartphone wirelessly and launch the Oculus app, then follow the instructions.

You can download sample files for CrystalView here (from Insta360 Pro 2).

How to convert videos into CrystalView format

According to Insta360, you’ll be able to convert videos into CrystalView .vrb format in a one-click process using an app that will be released soon.  Insta360 staff said that any 360 video of 6K resolution or above from almost any 360 camera (not just from Insta360) can be converted into CrystalView.

How to load photos and videos

After loading the files into the folder, you can launch Insta360Moment.

How does it look?

I viewed the Gear VR version and it had problems as of August 30, 2018.  In 2D photos and videos, the image appeared with double vision.  For 3D crystal view files, there was no double vision, but the video appeared to break up into several pieces that didn’t move together.  At least one user reported nausea from the Oculus Go version.  On the positive side, on the Gear VR, the video looks detailed.

The sample files for Oculus Go were in 8K 2D instead of 8K 3D (see above re requirements).  The videos were detailed and were not broken up.  However, the field of view was wider than normal, therefore when I turn my head, the view does not move the same way, which leads to discomfort / nausea.

I’m confident that Insta360 can resolve the issues with the Insta360Moment app.