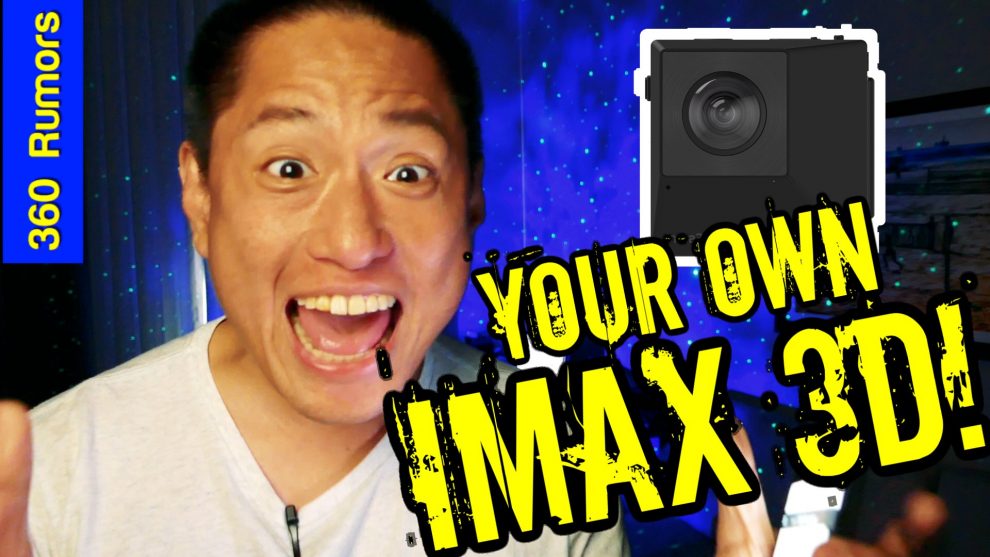 How would you like to be able to watch and shoot IMAX 3D-like videos or photos?  Insta360 EVO is a new hybrid VR180 and 360 camera, and its VR180 photos and videos are, if anything, even more immersive than IMAX 3D.  How is it different from other 360 cameras?  Should you get one?  In this review, I discuss how it works.  I discuss its specifications and features, and I compare it against some popular VR180 and 360 cameras.  I also provide some sample photos and videos. July 16, 2019 update: dynamic stitching samples  <a name=”review”></a>

Should you buy the Insta360 EVO?  Is it the camera for you?  In this video, I address that question by discussing what is VR and how it is different from 360.  I also discuss how to use the Insta360 EVO.  I then compare it with other 360 and VR180 cameras.  Finally I discuss its strengths and weaknesses, and give suggestions for determining whether you should buy it.

Photos and videos can help us remember events but for someone who was not at an event, photos and videos don’t really convey what it was like to have been there at the event.   But now, we are closer than ever to being able to capture and share the experience of “being there,” through VR cameras such as the Insta360 EVO.

Unless you’ve tried “true” VR, it is difficult to understand what it’s like.  One way to understand it is to contrast it with conventional 3D glasses, such as a Viewmaster headset.  On a Viewmaster, the scenes you see will have 3D depth.  However, you are fully aware that what you see is within the headset.  With VR, objects that you see will not only have depth, but they appear to stay where they are regardless of how you move your head.  With full VR with six degrees of freedom (6DOF), you’ll even be able to walk around the object and see it from different perspectives.  This creates the illusion that the objects have an existence independent from the headset.   True VR is therefore worlds apart from conventional 3D.

Although capturing a 6DOF VR experience is not yet readily accessible to consumers, VR cameras can capture a VR experience with three degrees of freedom.  They cannot (yet) walk around a VR photo or video, but if they stay standing in one spot, or seated on a swivel chair, the VR scene will appear immersive.

While VR is a powerful medium, it poses several challenges.  Among other things, for storytelling, the unlimited freedom to look around can mean that viewers can get confused about where they ought to look.  In addition, there are many viewers who would prefer to simply relax and look at one direction instead of constantly swiveling around their seats.

VR180 addresses this issue by showing only the front hemisphere of a VR experience.  The process of capturing and viewing the VR experience becomes much simpler.

Insta360 EVO takes this even further by adding 360 capability, which is useful for better stabilization and for capturing a third person view, as if it was an invisible flying camera.

Here are the Insta360 EVO’s specifications and how they compare to those of its stablemate, the Insta360 One X.

3. Insta360 VR: this new app enables you to immediately view the EVO’s photos and videos on your headset, without having to stitch them first.  You’ll be able to load the photos and videos wirelessly, within seconds.   Insta360 VR is available for Oculus Go and Samsung Gear VR

5. HDR Photos and Videos: Like the One X, the EVO can capture HDR videos as well as multi-exposure HDR photos (see sample below).  The HDR photos can be fused in the smartphone app.  On the desktop, you’ll need to use third party HDR software.  HDR Video requires no processing from the user.  You can use the HDR Video the same way as a regular video.  Please note that HDR Video mode has far greater dynamic range, but slightly less detail than standard mode.

6. Timeshift: EVO can combine slow motion and hyperlapse to create a speedramp effect.

7. Dynamic stitching: In July 2019, EVO received an app and firmware update that added a much-improved stitching algorithm which Insta360 calls Dynamic Stitching.  The new algorithm analyzes each frame of the video, recalibrates the stitching with every frame, resulting in much smoother stitching.

Here is another sample video in VR180 mode:

You can download Insta360 EVO sample photos and videos here for PERSONAL, PRIVATE VIEWING only (do not post or upload anywhere, and do not redistribute).  If you want to share with your friends, please direct them to this EVO page instead.

Here is a comparison between the EVO and other 360 and VR180 cameras:

Here are sample videos from the Insta360 EVO in comparison with other 360 cameras and VR180 cameras.  You can maximize the screen and zoom in with your mouse scroll wheel.


Here are comparisons between EVO and other VR180 and 360 cameras:

Insta360 told me the EVO and One X have the same sensor.  However, to my surprise, there are some slight differences between them for image quality.

When both are using the non-HDR video mode, it seems the One X has a bit better highlight detail than the EVO, as evidenced by the building toward the back of the sample crops below.

EVO is more detailed than Fusion’s 5.2K 30fps mode.  In the crops below, you can see the net around the basketball court, which is not visible in the Fusion video.  On the other hand, the Fusion appears to have better highlight detail, most noticeably in the building at the back, which is blown out in the EVO video.

Fusion was updated to add a new 5.6K mode in January 2019.  Compared to the 5.6K mode, the EVO appears to have approximately similar amount of detail.  Both EVO and Fusion are able to capture the net around the court, although EVO seems to have higher edge contrast.  For dynamic range, Fusion once more outperforms EVO.

Below is a comparison between Insta360 EVO in non-HDR mode compared to the Rylo at 5.8K.  Both cameras are able to capture fine details such as the net around the basketball court.  The Rylo may be slightly more detailed.  It might seem that the Rylo has much better highlight range and less shadow range, but it seems that at least part of this difference is due to the difference in exposure — Rylo chose a darker exposure, perhaps as much as 2/3 or 1 stop exposure difference. 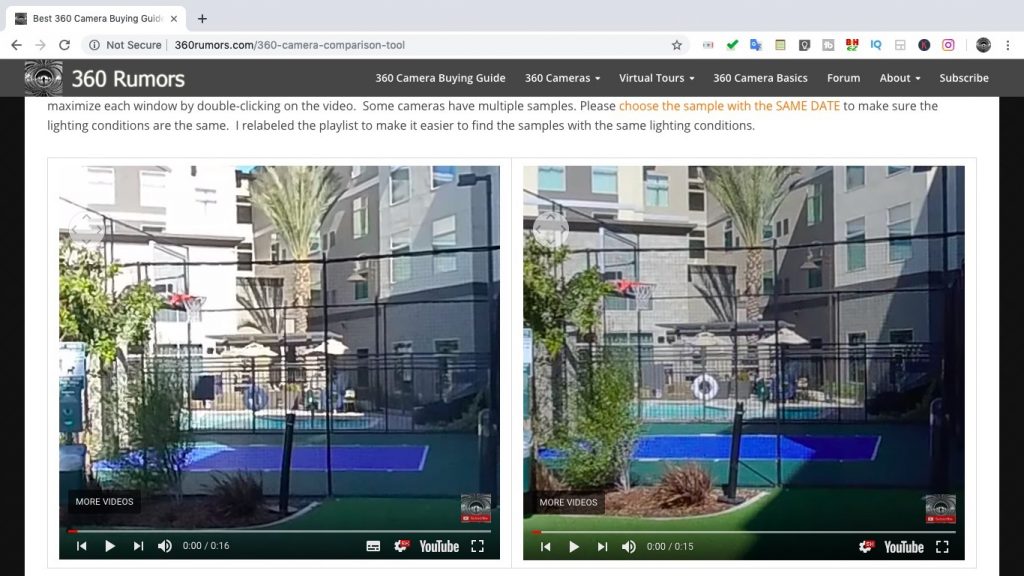 In this comparison between EVO and Vuze XR, EVO looks like it has slightly better detail (the net is not visible in the Vuze sample).  Vuze appears to have better highlight detail, but it also could be due to a difference in exposure (the tone of the shrub and basketball ring seems slightly darker in the Vuze XR).

EVO has more detail than Yi 360 VR.  The Yi 360 VR video below may have a slightly darker exposure.  For what it’s worth, in log mode Yi 360 VR has more highlight detail but less shadow detail than the EVO standard mode.  I’ll try EVO’s log mode next time.

The Yi Horizon reportedly uses the same sensor and lens as the Yi 360 VR.  If so, then the results here should also be representative of the Yi Horizon.

Insta360 EVO has far greater detail than Lenovo Mirage.  For dynamic range, Mirage may have better highlight range and worse shadow range.  I thought it might be a difference in exposure but the red basketball ring and the sunlit shrubs appear similarly exposed in both shots.

Should you get the Insta360 EVO?

If you don’t look closely, it seems that Insta360 EVO is like having an Insta360 One X (reviewed here) with a bonus ability to do VR180, for almost the same price.  Does that mean you should get the EVO instead?

Insta360 One X advantages vs. EVO

1. Better stitching: The One X’s slimmer profile means it has less parallax stitching error and has much smoother stitching.  However, the EVO’s stitching has improved significantly with Dynamic Stitching.
2. OLED display: The One X’s OLED display and in-camera menu enables you to change settings quickly without using the phone. On the EVO, you’ll need to use the phone for anything other than taking a normal photo or normal video.
3. Waterproof case: The One X has a waterproof case accessory whereas the EVO does not.
4. Removable battery: The One X’s battery is removable, which means you can bring spare batteries. The EVO’s battery is not removable.
5. Live streaming: The One X has live streaming with realtime stabilization, and can stream in 360 or as a flat video.
6. Insta360 Stats: One X can add a GPS overlay to videos when connected to the app.
7. Bullet time: The One X can be used for bullet time videos using the optional bullet time handle. The EVO does not have a bullet time shooting mode. However, it can shoot at 3K 100fps, and you can enable direction lock, which will be somewhat like bullet time mode.
8. Quick Capture: One X has a quick capture mode that enables you to hit the shutter while the camera is on standby.  The camera will then automatically turn on and start recording.  EVO does not have this feature as of March 2019.
9. USB cable: The One X includes a special USB cable for transferring its files more quickly and more efficiently to your phone. The EVO relies only on wireless transfers.

You’ll need to weigh those benefits against having VR180 capability.  If you decide that you prefer the VR180 capability, you probably should also consider the Vuze XR and the Kandao Qoocam.  Here are their key advantages and disadvantages compared to the EVO:

Kandao Qoocam (reviewed here)
+ 3 hour battery life (vs. 1 hour for the EVO)
+ best stitching among hybrid VR180 cameras
+ depth map: can be used to simulate 6DOF effects or for Facebook 3D photos.
+ DNG8 mode: can shoot a burst of 8 DNG photos and combine them in order to get very high quality.
– lowest photo and video quality among these three hybrid cameras.
–  vulnerable to glare

Vuze XR (reviewed here)
+ best shooting controls in this group (easiest to switch between photo and video, easiest to switch to VR180)
+ underwater case
+ best exposure blending / flare resistance in this group
+ video is much more detailed than Qoocam
– worst stitching among these three hybrid cameras
– stabilization has drifting

In my opinion, among VR180 cameras, I would choose the EVO unless you want the Qoocam’s stitching, or the Vuze XR’s underwater case option.  If you already have another 360 camera that has good stitching or has good underwater stitching, then that would be a reason to get the EVO.

Insta360 EVO is $419.99 and available for order directly from Insta360, with a free invisible selfie stick using this link.  Thanks for using these links to support 360 Rumors at no additional cost to you so I can do more tests and reviews.  I will have more information about the Insta360 EVO over the next few days.

Insta360 EVO is a 5.7K hybrid VR180 (3D 180) and 360 camera. Among consumer VR180 cameras, it has the highest detail and the best stabilization. In standard mode, it has less dynamic range than Vuze XR but in HDR Video mode, its dynamic range easily exceeds that of the Vuze XR.
EVO’s toughest competitor is probably the Insta360 One X, which has much better stitching, slightly more detail, and has several features that the EVO does not have, such as live streaming.
Whether you should get EVO depends primarily on whether you have a VR headset or plan to get one. If so, and you’d like to capture VR experiences, the Insta360 EVO is an accessible way to do so. On the other hand, if you don’t plan to get a VR headset, then Insta360 One X will be a better camera.