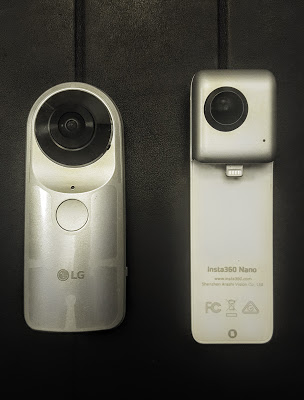 This is part 2 of our comparison of the Insta360 Nano (reviewed here) and the LG 360 Cam (reviewed here), two affordable fully spherical 360 cameras that offer the best value in their class.  Yesterday, I posted a comparison of sample photos from the Nano and the 360 Cam.  In this post, we’ll look at sample videos from these two cameras.

I took videos with the Nano and 360 Cam in a variety of settings, both indoors and outdoors.   I imported the videos into Gear 360 Action Director (the included software for Samsung Gear 360). Note that even though the Nano’s native resolution is 3040 x 1520, it was exported as a 1440p video.  In any case, I combined the footage into one video.  I then exported the combined video as a 1440p video.  Other than trimming some of the videos and adding titles to identify the cameras, the videos are unedited.

Observations:
– The Insta360 Nano video is noticeably sharper and more detailed.  This is expected given the higher video resolution of the Nano (3040 x 1280) compared to that of the LG 360 Cam (2560 x 1280), a difference of approximately 41%.  The Nano’s higher resolution becomes even more important when the videos are viewed on a VR headset.
– The Insta360 Nano is very susceptible to chromatic aberration (fringing), whereas the 360 Cam has excellent resistance to chromatic aberration.
– The 360 Cam is much more prone to flare compared to the Nano.
– The sounds from both cameras are good.  To me, the 360 Cam sounds more neutral, while the Nano sounds like it has more treble.

How about you?  Considering both the photo and video quality, which camera do you like better?  Let me know in the comments!

Should Knott’s Berry Farm reopen FearVR?
Spherical vs. Flat 360 photos and videos: what’s the difference and why it matters (TECHNIQUE)
Comment