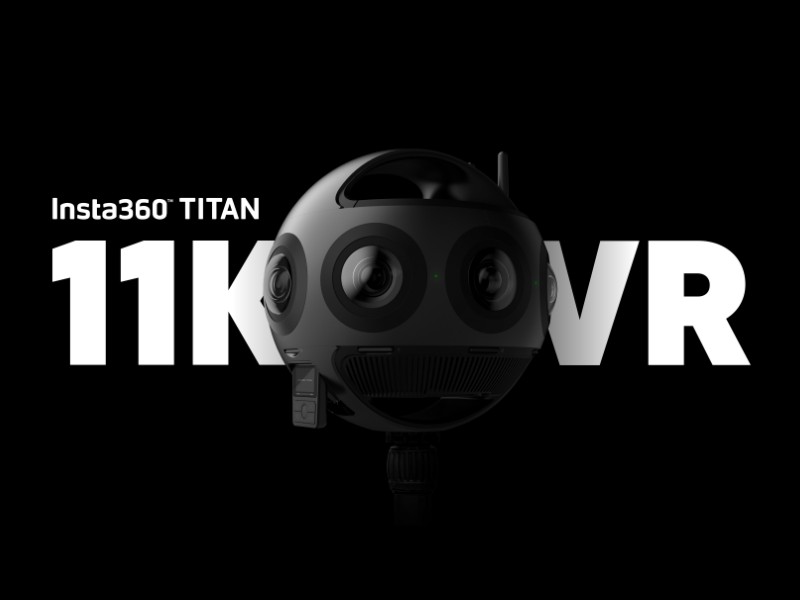 Insta360 has begun shipping preorders for the Insta360 Titan, its flagship 360 camera with eight Micro Four Thirds sensors and 11K resolution.  Here are my hands-on impressions of the Titan from CES 2019, and some sample videos.

Here is a review by Hugh Hou from CreatorUp who has been beta testing the Insta360 Titan since March 2019.

In summary, Hugh praised the Titan’s image quality, which is truly amazing.  However, he pointed out the steep requirements for stitching and editing the Titan’s videos.  There are also few people who have the VR headset and app required to view the Titan’s extremely high resolution.  However, for professionals who are looking for the highest image quality, the Titan provides the best image quality available for an all-in-one 360 camera as of June 2019.

Titan’s Micro Four Thirds sensors are approximately 7.5 times larger than the 1/2.3-inch sensors typically used even in many professional 360 cameras.   Besides its higher resolution, Titan’s larger sensor gives it much higher image quality.  It captures 10-bit color, allowing for billions of color combinations and high color accuracy.  It also has much higher dynamic range, and low light sensitivity than 360 cameras that use smaller sensors.

In addition to higher image quality, Titan also features 9-axis FlowState stabilization and long range low-latency wireless control with Insta360 Farsight, which is a transceiver system for smartphones or tablets with a maximum distance of 1 km (when there is a clear line of sight).

Insta360 Titan has spatial audio.  However, audio will pick up the noise of the internal fan.  In the future, it’s possible that Insta360 might be able to turn off the internal fan for short periods, as it did for Insta360 Pro and Pro 2.

Insta360 showed the Titan at CES 2019.  I was able to see the Titan and to view stitched and unstitched videos.

To enable viewing of Titan’s high-resolution videos, Insta360 has developed a technology called CrystalView, which according to Insta360 can enable high-end smartphones to view Titan videos at full resolution.  When CrystalView was first released for Insta360 Pro 2, it was a bit buggy and distorted.  However, at CES the CrystalView worked very well, except that the very edge of the image circle in the headset had distortion.  CEO JK Liu said these distortions would be corrected.

Viewed in a headset with Crystal View, the Titan’s videos looked extremely detailed, similar to the detail of high quality 360 photos, except in video form.

I also examined unstitched Titan videos on Insta360’s 4K monitors.  They looked very sharp with beautiful colors.  I shot a video with my gimbal camera but the video couldn’t capture anywhere near the gamut of the video I saw.

Here is an interview by Hugh Hou from CreatorUp.

Here is a sample video montage.  YouTube is currently limited to 8K, therefore these samples were downscaled to 8K.

You can download full resolution files in .VRB Insta360Moment CrystalView format here.  The Insta360 Moment app is available for Samsung Gear VR or Oculus Go.  Please note that to view the full resolution, you’ll need Samsung Gear VR running on Samsung S8 or higher.  I’ve viewed the video in the original resolution and it is strikingly sharp.  However, the Insta360 Moment app seems to have distortion (it seems like the wrong IPD).  I’m sure Insta360 will fix the distortion in the app.

Here is a timelapse by CreatorUp, downscaled from 11K to 8K.

Here is a comparison between 8-bit and 10-bit by CreatorUp:

Insta360 provided these image quality comparisons, although I’m not sure with which camera they are comparing the Titan:

No stitch editing: Titan’s unstitched videos can also be imported directly and edited in Adobe Premiere Pro, which not only saves stitching time and storage, but also improves quality by reducing the number of times the video is compressed before being published.

Titan is now shipping for $14,999 direct from Insta360 or preorder from B&H Photo.  By comparison, Z Cam’s V1 Pro, which has nine Micro Four Thirds sensors (eight radial and one zenith), costs $33,800 and has a lower resolution of 8K monoscopic or 7K stereoscopic 360 video.