One of the features that is missing on the Samsung Gear 360 is an intervalometer, or interval shooting mode, where the camera will automatically take photos at selected intervals.  The Gear 360 does have Time Lapse, which is one way interval shooting can be used.  However, it’s not the same thing because the end product is just a time lapse video, and you won’t get the individual photos that comprise the time lapse video.

In my case, I wanted an intervalometer so that I could take aerial 360 photos even when the camera is out of range.  The Time Lapse feature does not meet my needs (unless I’m willing to settle for video stills).

I found a workaround that can partially add interval shooting for the Gear 360 — it’s again through Google Street View, which also enabled a remote shutter for noncompatible phones.

When the Gear 360 is connected to the phone via Google Street View, there is an option called “Auto-Capture”.  The cryptically named feature is actually an intervalometer — the camera will automatically take photos at a specific interval, and you will have access to all the photos.

Steps:
1. Download the Google Street View app.  You may need to create a Google account, etc.
2. Turn on the Samsung Gear 360, then hold down the menu button.  When you see Gear 360 Manager, press the menu button twice to switch to “Google Street View.”  Then press the shutter button to select that option.
3. On your iPhone, connect to the new Wi-Fi network “Gear 360_(xx:xx).OSC”  Enter the password shown on the Gear 360’s display.
4.  Once the iPhone is connected, launch the Street View app.
5.  There will be a sign that says “Connected to Gear 360”.  On the right side of that are three dots.  Tap on it to bring up the Settings.
6. Turn on Auto-capture.  Press X to exit the Settings.
7.  Press the camera icon on the bottom right to start the capture.  The camera will keep taking photos at regular intervals.  Press the camera icon again to stop capture. 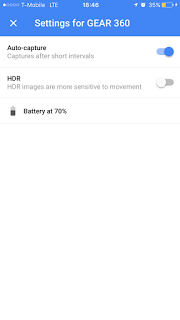 Each of the captured photos will be at the full 30mp resolution of the Gear 360 and moreover, will already be stitched.

This feature has several limits:
1.  There is no way to adjust the intervals.  It will simply keep taking photos, transferring them, stitching them, and then taking the next photo as soon as the previous photo is stitched.
2.  The photos are NOT stored in the memory card.  They go straight to your phone’s gallery or camera roll.  Which means…
3.  You must be able to maintain the Wi-Fi connection between the Gear 360 and the phone.
4.  The Street View stitching algorithm seems to produce less precise stitches than the Gear 360 Manager app.

In my case, the requirement to maintain a Wi-Fi connection probably makes it unsuitable for taking aerial photos as I intended.  So, I’m still hoping for a real intervalometer.