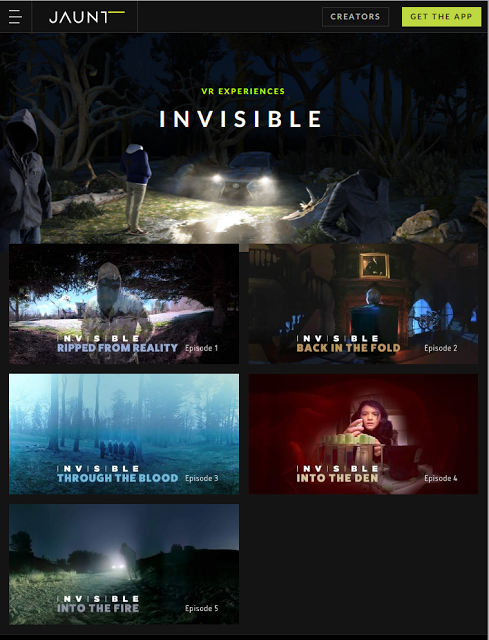 “Invisible” is a 6-part sci-fi thriller miniseries in VR.  It’s directed by Doug Liman, director and producer of movies such as The Swingers, The Bourne Identity and Mr. & Mrs. Smith.  Invisible is in 3D 360 video, with 360-degree Dolby Atmos sound.

Invisible is about a young heiress who suddenly discovers she has a cousin named Susan.  Susan is pregnant but there’s something unusual about the baby.  Meanwhile, an invisible man is coming after Susan.

I watched the first episode and I thought it was interesting and very well done.  There were parts that I initially thought were distorted but actually turned out to be part of the special effects.  I liked the 360 videography, which did not leave me confused as to the center of attention.  Besides watching it for entertainment, I think it’s also a great way to learn some 360 videography techniques that you may be able to use for your own videos.

You can watch Invisible in Jaunt VR, which is available for Google Cardboard (Android and iOS), Samsung Gear VR, Oculus Rift, HTC Vive, and soon will be available on Playstation VR as well.

ePhotozine reviews the Nikon Keymission 360; rates it 4 out of 5 stars
Here are the amazing winners of Sketchfab’s VR artwork contest
Comment