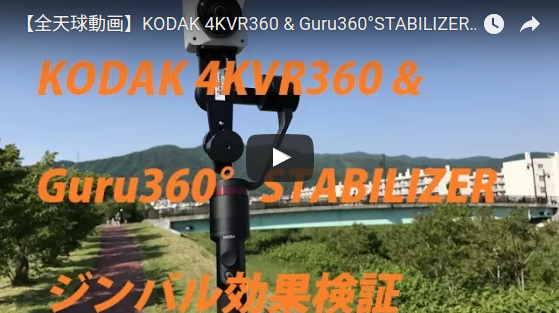 Here is a new sample 360 video from the Kodak Orbit360, this time stabilized with a Guru 360 gimbal, the first affordable 3-axis gimbal for 360 cameras.

One of the most effective ways to improve your 360 video is with a 360 camera gimbal.  Not only does it make the video more comfortable to watch, but its stabilization effect is mesmerizing.  It’s an easy way to elevate your 360 video over non-stabilized 360 videos.

KouGa Ch, who has posted several sample 360 videos from the Kodak Orbit360, used a Guru 360 gimbal in his latest sample video:

Meanwhile, an anonymous Kodak employee said that the Orbit360, released on May 25 in Japan, will be released around June 21 in the US.  I would take it with a grain of salt, though, since the Orbit’s release date has been pushed back more than once, to put it mildly.

The Orbit360 is not yet available for order.  But you can get the Guru 360 from GimbalGuru (reviewed here).

PSA: Does 360 Rumors look garbled / scrambled? Pls. clear your cache or do a hard refresh