I just got the Kodak PIXPRO Orbit360 last Friday. Here are my first impressions and some sample photos.  Updated: August 13 (with information about adjusting the stitch in the photos).

Last year, I found that the Kodak PIXPRO SP360 4K Dual Pro had the highest overall video quality among consumer 360 cameras. However, the Dual Pro is a rig, which makes its workflow much more complicated than the workflow for all-in-one 360 cameras.

Last September, news surfaced about a new 360 camera from Kodak PIXPRO called the 4KVR360, which would be a fully spherical all-in-one 360 camera.  It was unusual because it featured asymmetric lenses.  One lens would be 235 degrees, the same as that of the SP360 4K.  The other lens would be narower.   The idea is that it would enable the camera to use any of three modes: a fully spherical 360 view,  a wide 235-degree view, and a 197-degree view.

At CES, the 4KVR360 was renamed Orbit360 (though it’s still known as 4KVR360 in Europe and Japan) and they provided a little more information about it, including some demos (though no full resolution samples).  The Orbit360 was originally to be released around March or April, but the release date kept getting pushed back.  It was released in May in Japan and finally was released in the U.S. last week at $499 for the Adventure Pack and $549 for the Satellite Pack.  I got mine last Friday.

SPECIFICATIONS
Here are the key specifications of the Kodak PIXPRO Orbit360 (4KVR360):

HANDS-ON FIRST IMPRESSIONS
The Orbit360 is smaller than you might expect. It is smaller than the Nikon Keymission 360 with which it’s usually compared because of their similar appearance. The size is more similar to that of a single SP360 4K camera, although of course thicker because of the second lens.  One thing I noticed is that the wider lens of the Orbit360 looks different from the lens of the SP360 4K, so I don’t think the lens design is identical (I could be wrong).

The camera is mostly plastic and feels very light, similar to the SP360 4K. However, there are a few differences.  The LCD display is now backlit, making it much easier to read .  Another important change is that the door covering the battery, Micro SD, HDMI and microphone jack has been moved to the side, where it can be accessed while the Orbit360 is mounted on a tripod.

The on-camera controls are similar to those of the SP360 4K Dual Pro. There is a menu button, and the Wi-Fi and menu buttons serve as up or down buttons. The shutter button is used for selecting options. I didn’t find a button for quickly exiting the menu and getting back to shooting.

There is an app for Android and iOS, similar to that of the SP360 4K, with intuitive controls. The Orbit360 can also be controlled by a PC or Mac using Wi-Fi.  Connecting to the app was a painless process for me.  I simply pressed the Wi-fi button on the camera, connected to the Wi-Fi signal using my phone’s Wi-Fi settings and then launched the app.  I also tried using NFC and it worked most of the time.

By default, photos are stitched in full resolution in-camera.  However, you can also switch to unstitched photos, which can then be stitched on the desktop app.  The advantage of using unstitched photos is that you can adjust the stitching for best results.


Based on these sample photos, I would say the Orbit360 has very good dynamic range for a consumer 360 camera.  I also like the colors and contrast, although the shadows are a slightly darker than I would like.

I like the fact that there is very little chromatic aberration, with only slight purple and green fringing.  The lens has consistent sharpress throughout most of the frame except at the stitch line.

Flare resistance is generally good, although in strong light, there may be small flare artifacts: 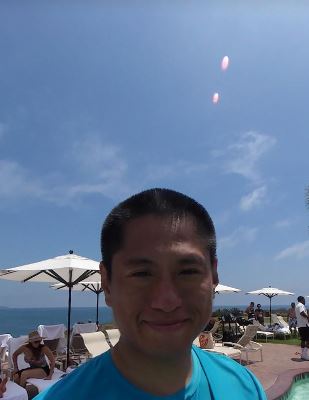 In terms of resolution, photos seem to have plenty of detail – there’s sufficient detail that you can crop a photo closely and still have a decent image.

However if the photos are viewed very closely (1:1 view), where you can see that the photos look too smooth, without sufficient texture or high frequency detail, making them look somewhat like watercolor paintings. I am supposing this is because the noise reduction is much too aggressive, or the smoothening might have been intentional in order to flatter subjects by removing wrinkles.  I hope they can fix this via firmware update.

By default, the Orbit360 stitches photos in-camera.  However, you can also switch to unstitched photos (the option can be changed in the resolution menu).

A related issue is that the rear lens side can sometimes appear noticeably noisier than the front lens, and sometimes also the front and rear lenses have a slightly different exposures, making the stitch line more obvious.

Regarding vertical correction, the camera has a 3-axis gauge, but correction is limited to orthogonal positions (with the LCD facing directly up, down, forward, backward, left or right).  If the camera is tilted, the tilt will not be corrected.

You can specify whether you used the lens cover or not (if you don’t use the lens cover, the field of view will increase slightly).  You can also specify the “radius” which used to be called “distance” in the SP360 software.  You can do this independently for each lens.  Finally, you can adjust the stitching position, which controls how much of the final image will be from the front lens or the rear lens.

In addition to stitching unstitched photos.  you can create new versions of the photo with different points of view such as little planet or fisheye or rectilinear.  You can also adjust the sharpness, contrast, brightness, and saturation using sliders.

Once you select the view that you want, you click on the camera icon which creates a copy of the photo is 3840 x 2160 resolution (in the same folder as the original photo).

What do you think of the Orbit360’s photos?  Let me know in the comments!  In the next installment of this preliminary review, I will show sample videos from the Orbit360.  I will also show a comparison between the Orbit360 and some popular 360 cameras.

Add a 4K 360 camera with realtime stitching to your smartphone! Hands-on first impressions with samples of ION360 U
Which has better image quality? Insta360 Pro VIDEO vs. a Ricoh Theta S PHOTO
Comment