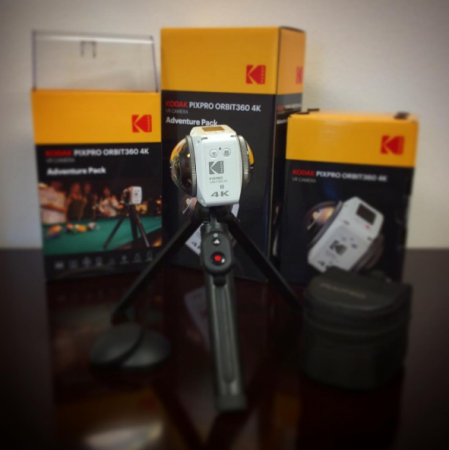 The photo shows three boxes behind the Orbit360.  The smallest one seems to include only the Orbit360.  The other two boxes are both called Adventure Pack, and appear to include: a tabletop tripod that doubles as a handle, a remote control (looks quite different from the conroller I saw at CES), lens caps, and a camera case.

Kodak’s post teases that it’s “almost here,” and that there will be an unboxing video soon.  This implies that they’ve already been mass-produced.  But based on what Kodak insiders said, I’m still doubting that it will be launching at NAB Show 2017.  I’ve asked Kodak for a comment, but they haven’t replied yet.