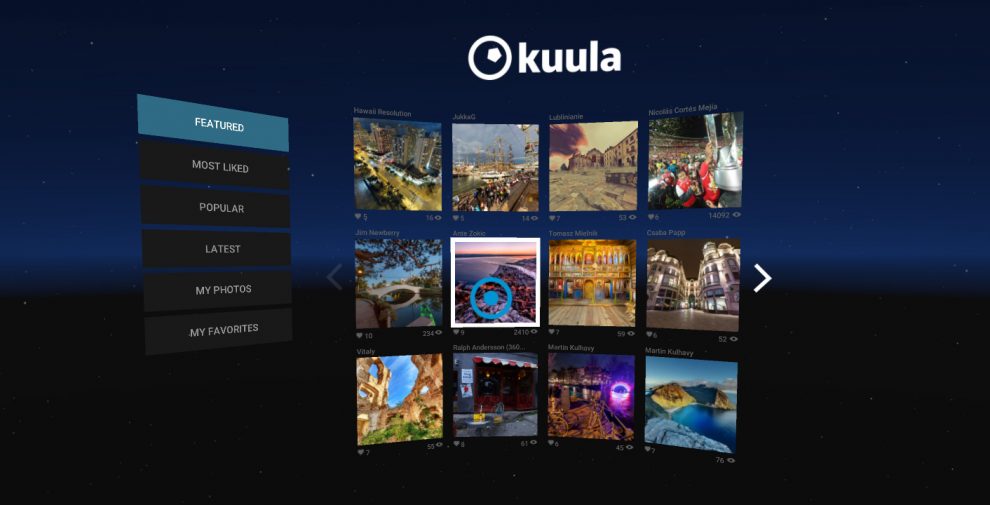 Kuula.co has launched apps for Android, iOS and Samsung Gear VR to enable VR viewing of 360 photos shared on its platform.

Kuula (previewed here) is a platform for sharing 360 photos.  It began as a web-based platform but they recently launched a VR app, now available on Android, iOS and Samsung Gear VR.  The app is intended as a companion to its web service rather than as a replacement.

The app can be used to view 360 photos with a Google Cardboard (on Android or iOS) or a Samsung Gear VR headset.  Cardboard viewing is already an option in its web platform when viewed on a smartphone but the app allows you to navigate and browse through photos without removing your headset.  In addition, it enables higher quality head tracking with Samsung Gear VR.

Here’s how to use Kuula VR:
1. Sign up for Kuula.co (if you haven’t already).
2. Download the app for your preferred platform (Android, iOS or Samsung Gear VR).
3. Link your Kuula account with the Kuula VR app.  On the Kuula website, go to your profile, select “VR” and generate a 4-digit PIN.  On the Kuula VR app, tap on “My Photos” and enter the PIN from the website.

You should now be able to view your Kuula photos on Kuula VR.

TECHNIQUE: Move and animate titles and other objects anywhere on your 360 video or photo
DEALS: special promo code for Kodak Pixpro Orbit360!
Comment