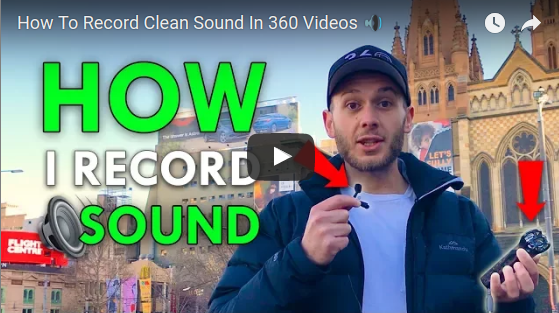 Improving audio an effective and important way for improving your 360 video quality, yet often overlooked by many of us who are visually oriented.  I myself made that mistake in my older videos where I didn’t bother to fix bad audio, thinking viewers would look past it and pay attention to the substance.  Sorry to say, they didn’t.  So, ignore audio at your risk!

Some comments about the video: Ben recommended the Rode lavalier mic, which he actually recommended to me as well when I had audio problems in my videos.  I thought the price was kind of high (because I wasn’t accustomed to getting decent audio recording equipment).  But I got it anyway and no one’s been complaining about the audio for videos where I used the Rode mic, so I suppose it did its job.

Ben also recommended the Zoom H1 recorder, and I got one but I returned it.  Instead, I’ve simply been connecting the Rode mic (with a TRRS adapter) to my smartphone and recording from that.  Please note that unlike Ben I didn’t go to film school.  So take that with a grain of salt.  But FWIW it turns out someone has already made an experiment comparing sound recorded with a Zoom H1 versus a smartphone, so you can judge for yourself whether a smartphone is adequate.  Check out this video by David Kadavy:

How about you?  Do you already use an external recorder when using your 360 camera?  What do you think about using a recorder versus a smartphone?  Let me know in the comments!  Thank you very much to Upton North for bringing Ben’s video to my attention!