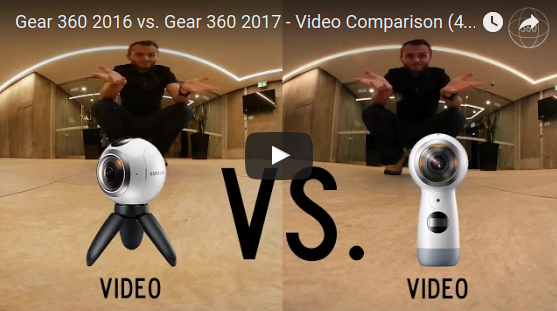 I agree with Ben’s findings.  You can check out my comparison between the 2017 Gear 360 and original Gear 360 here.   I also have an updated comparison here (comparing the original files).  I will also be working on the mega-comparison (with twelve 360 cameras) as soon as I get the Xiaomi Mijia Sphere 360 (which should be arriving this week).

In the meantime, if you want to get the 2017 Gear 360, it’s available here:
– Amazon
– B&H Photo
– eBay
The original Gear 360 is available below and can be found below $200, making it the most affordable 4K 360 camera.  (Please note you will need a Samsung S6 or above, and the desktop software only runs on Windows with at least a 3rd generation Intel Core processor).
– Amazon
– B&H Photo
– eBay
Thank you for using these links to support 360 Rumors!