The photo above is not the result of some new diet, but you could say it is from a new form of exercise.  /u/Leppermessiah1 lost 14.4 lbs. and 3.75 inches from his waistline in 50 days just by playing video games in VR.

A couple of months ago, Leppermessiah strapped a heart rate monitor on himself and discovered that playing one hour with his HTC Vive (reviewed here) enabled him to burn 866 kcalories: 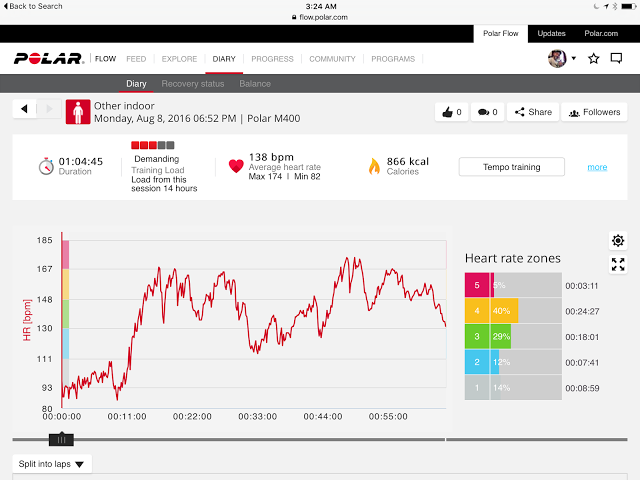 He then decided to challenge himself to become more fit using a regimen consisting of nothing but VR, some walking and sensible eating.  His idea worked, as these photos show after just 50 days of exercise.

His initial routine consisted of the following games:
10 min: The Lab’s Longbow (Warmup)
20 min: Thrill of the Fight
20 min: Holopoint (Squat to dodge)
10 min: Holoball (cooldown pace)
For the sixth and final week, he varied the games:
10 min: Audioshield (Custom Difficulty Mod) (Warmup)
20 min: Sword Master VR (Novice Levels 6-10)
20 min: Bitslap (Normal Difficulty)
10 min: Fruit Ninja VR (Arcade Mode) (Cooldown)
For someone who hasn’t played on the Vive, it might sound impossible but I believe these results.  After just one round on Thrill of the Fight (a boxing game), my heart rate reaches 160 bpm, and after about 30 minutes my shirt is completely soaked with sweat.  I’ve also noticed that my endurance has improved.  It used to be that I would need to rest after just one round of Thrill of the Fight.  After playing it around 8 hours over the past 2 weeks, I can do two or three rounds without having to rest.  The best thing about it is that I actually look forward to exercising, and I can stick to it.  (It helps that the Thrill of the Fight’s developer updates the AI regularly 🙂 ).
If you’re interested in trying out this VR fitness program, check out Leppermessiah’s VR Fitness group on myfitnesspal.com.  I joined the group and got a heart rate monitor to get an accurate measure of the number of calories I burn.  I’ll post the results after a month.

Update: I tested the results of VR exercise and yes it’s real.  Check out my test results here!

The latest theme park to add a VR roller coaster will be SeaWorld
Nico360 finally posts an update!
Comment