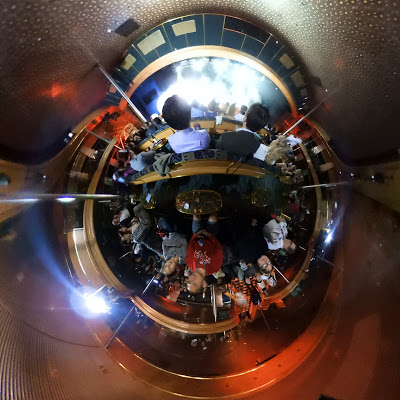 Here are a couple of low light photos from the Ricoh Theta S and Nikon Keymission 360.

I took the photos while watching a show during our vacation on New Year’s Eve.  I used a selfie stick tripod (similar to this one) and took the shots with a self-timer.

and here’s the second one:

The bottom photo was with the Nikon Keymission 360 at f/2, 1 second (hence the blur from my head movement), ISO 1600.  It was on auto exposure but with +0.7 exposure compensation (I’ve left it there because the Keymission tends to underexpose to preserve highlights).

It’s not a scientific test because there are so many variables that are different but perhaps it gives a very rough idea of how these cameras perform in actual use in low light.

FWIW, I personally prefer the Keymission 360 when shooting in low light, but the Theta S is what I use for night sky shots because its shutter speed can be as slow as 60 seconds.  For better shots in low light with almost any 360 camera, I also like to use an LED light with flexible arms.