Magix Movie Edit Pro Plus 2018 has been updated to add a new feature for leveling the horizon (sometimes called vertical correction) on 360 videos, a very useful feature for 360 video editing.

When viewing a 360 photo or video, the horizon must be level, or else the photo or video will be very difficult to watch because scrolling to one side or the other will turn the screen in ways that the viewer doesn’t expect.

There are several apps and software for leveling the horizon for photos, but for videos, those tools are less common, and sometimes, they are expensive, such as Adobe Premiere Pro.

Magix Movie Edit Pro Plus 2018 is a video editing app with a consumer-friendly price (currently around $80) yet has sophisticated 360 video editing features, such as being able to animate titles and picture-in-picture videos within a 360 video.  Now Magix also includes a horizon leveling feature (version 17.0.1.141).

How to straighten, level, or correct the horizon on Magix Movie Edit Pro Plus 2018

Here is a sample video where the horizon is not level: 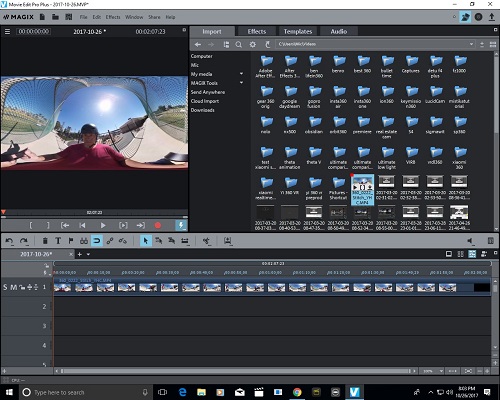 Here’s how to correct the horizon in Magix Movie Edit 2018:

1.  On the right side, click on the Effects tab.
2. Scroll down to “360 Video” tools and select “360 Scene Rotation.”
3. Adjust the x, y, and z sliders on the right side of the screen.  Just adjust the sliders one at a time.  The goal is that verticals within the middle 1/3 of the screen are all vertical).
That’s all there is to it.

Here is the corrected horizon:

If you found this tutorial useful, FYI I have many more equally helpful tutorials. Please subscribe to get free emails with articles like this, and don’t worry – I will never show your email to third parties! If you have any questions or other tutorials that you want to see, pls. let me know in the comments.