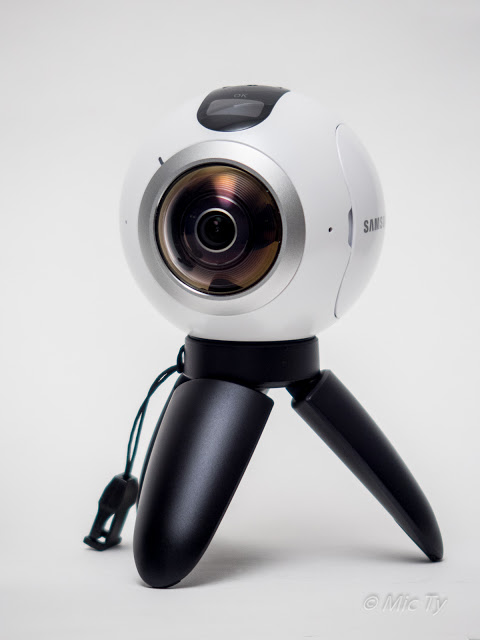 Apparently, the image quality of the Samsung Gear 360’s output is partly dependent on which method you use to stitch it, as discovered by Markr041.  Mark also uploaded a comparison between the Gear 360 and the Kodak SP360 4k.  Hit the jump to check it out!


MAXIMIZING THE GEAR 360’s VIDEO QUALITY
The Samsung Gear 360 video is not stitched in-camera.  Instead, you need to stitch it with a compatible phone, or with the included Action Director software (or a 3rd party software if you prefer).  If you stitch on an S7, you’ll get the full 4k video resolution.  But if you stitch it with a Samsung Galaxy S6 or Note 5, you’ll be capped at 2k.  So, realistically, you need to stitch either on an S7 or the Action Director.
What Mark found out is that the two options have different image quality (emphasis added):
“1. The original file produced in the camera is H265, at 32 Mbps. HEVC or H265 gives approximately the same quality as H264 at double the bitrate, so equivalent to about 64 Mbps H264 (about what the GoPro shoots in 4K).
2. When you save the file on the camera to the device (Samsung Galaxy S7) you get a stitched 360 file (equirectangular) that is H264, with a bitrate of 61 Mbps. The audio is AAC 192 kbps, at 48Hz.
3. You can also create a stitched file using the free Action Director software on the PC. Take the unstitched video files from the microsd card and load them on the PC.
But – wait for it – the stitched file the [Action Director] creates is half the bitrate of the one produced on the [S7]: 32 Mbps H264 (not H265), and the audio is also at a lower bitrate, 128 kbps at 48Hz. So, it produces a lower quality video. And there are no options that I could find to change how it stitches (it is automatic).”
Here is the related thread on DPReview.

Update: Simon Miya of Infilms VR disagreed, saying,  “The S7’s stitcher’s higher bitrates are only a crutch to deal with the much lower processing power available, it does not result in better quality than the PC stitcher.”
Update 2: Here is Mark R’s response to Simon’s comment.  [TLDR: yes processing power can make compression more efficient, but the fact is that the PC-stitched bitrate are almost half of the S7 bitrate, and it is very unlikely that the PC codec is twice as efficient as the S7 codec.]

I haven’t verified either way (because I don’t have an S7), so I don’t know who is right or wrong about this issue.
Update 3:
InFilm (I am supposing Simon Miya) posted comments below, but they disappeared for some reason. Fortunately, Blogger automatically emails me the comments so I am posting them here so everyone can evaluate the info for themselves:

Comment 1:
“PSA: Action Director does not mangle your shots. The S7 does not offer significantly better stitching. That is a complete falsehood spread by bloggers and reposters who never investigated the issue – in fact the person that first came up with the theory never even compared the actual images, basing the whole thing on incomplete evidence and numbers that don’t tell the whole story.

Higher compression ratios in h264, ie smaller files, require significantly more processing power which the S7 doesn’t have. The higher bitrate that the s7 stitcher outputs is just a crutch to deliver decent quality with this reduced processing power. The Action Director software has more flops at it’s disposal and is able to compress the footage much more efficiently. I’ve done many comparisons and Action Director does not add any artifacts that weren’t already there in the double fisheye.

This information applies to full-motion video, not timelapse where there is a bug in Action Director, and requires using the software in what may seem an unusual way in that you don’t export from the software at all, just grab the stitched files from the program’s working directors revealed in the settings. The program autostitches clips in the background as soon as you import them and saves them in the aforementioned working directory, just grab them from there a short time after importing and take them to other video editors at that point.”

Comment 2:
“The user that originally posted this dpreview, as well as the owner of this blog were both very very rude to me when I pointed out their mistake.”  [Editor’s comment: the thread on DPReview is here and available for anyone to read for themselves to evaluate rudeness.]

Comment 3:
“The user that originally posted this at dpreview, as well as the owner of this blog were both very very rude to me when I pointed out their mistake. I have been threatened with lawsuits over this. I expect this post to disappear like my previous one, but I am posting it many other places beyond their reach.”   [Editor’s comment: On the Facebook Ricoh Theta Users Group, Simon Miya told another user that I was spreading misinformation.  When I asked him to identify what misinformation, he pointed to this article and I responded that I was only reporting on Mark’s findings.  I asked for if he saw any further misinformation and he said I would need to pay him to identify them.  I told him that if there is no other misinformation then he is making a serious accusation without evidence.  He said that my statement amounted to a legal threat and asked if I was ready to “back it up.”  I said, sure no problem we can resolve this in court.  As the first step to a legal resolution, I asked him to provide his address, which he declined to do.  In case In Film thinks my summary of the discussion is unfair, here is a link to the discussion — see the comments under the posted question — so you guys can see for yourselves whether my summary is fair or not.]

Comment 4:
“The censorship here is epic. All logged.”  [Editor’s comment: I was in a meeting a while ago and did not even see these comments.  After my meeting, I checked my emails and saw several comments from In Film on my email box.  As I was about to respond to them, I saw they were deleted.  I did not delete them myself.  I don’t know how they disappeared.  In any case, to establish that I’m not trying to censor In Film, I reposted his comments on the body of this article.]  [Update: I found the comments that disappeared.  They were in the spam folder.  I’ve reposted them.]

Comment 5:
“I am reposting my experiences here in many other places, you can’t silence me.”

Update 4:
InFilm’s Simon Miya did some further tests and says he found the PC-stitched files to be better than the S7-stitched files:
“Also, after further testing today I am convinced that the S7 stitched videos actually have lower image quality than the PC stitched files. The phone stitcher adds significant smoothing to the image that isn’t there in the double fisheye, probably in an attempt to minimize artifacts from the much less efficient compression.

This could have the effect of fooling some viewers into thinking the phone stitch has better quality, when in actuality is has far less fine detail. You don’t notice this unless you compare all 3 images, including the unstitched double fisheye.”

COMPARISON WITH KODAK SP360 4K
Mark also has the Kodak SP360 4k dual pro pack, and he compared it with the Samsung Gear 360, using the S7 to stitch the Gear 360 for maximum video quality.  With both samples at 60mbps, it’s the most direct comparison.   Here is his video comparison (please select 4k quality): https://youtu.be/KVE2cvW3Ppo
What do you think?  Pls. post your thoughts in the comments!
RELATED POSTS
You may also be interested in these related posts:
You can also click on the label/tags below the sharing buttons to find other related posts.