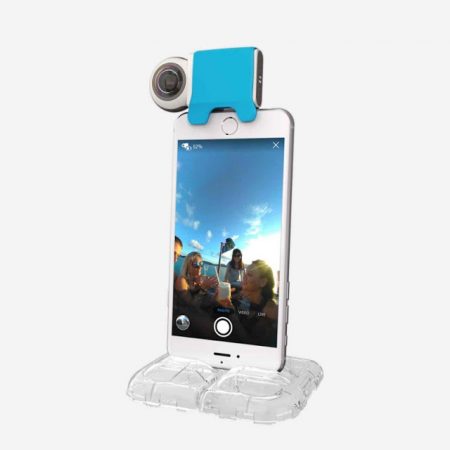 PhotoGearNews posted a short video about the Giroptic iO, a 360 camera accessory for iPhones and iPads.

The Giroptic iO ($250) is a 360 camera that attaches to iOS smart devices, a design first seen in the Insta360 Nano ($199), which went on to become successful and popular.

Like the Nano, the iO attaches to iPhones.  However, one advantage of the iO is that it is compatible with a wider range of iOS devices.  The Nano’s interior side has a curved shape to follow the shape of the iPhone 6 and 7 series.  However, because it is curved, it cannot be used on an iPhone 5S or SE unless you use a modified adapter.  In contrast, the iO is compatible with a wider range of iPhones and iPads.  The iO’s photo resolution is also higher than the Nano (3840 x 1920 vs. 3040 x 1520) but its video resolution is lower (1920 x 960 for the iO vs. 3040 x 1520 for the Nano).

According to PhotoGearNews, Giroptic is also working on an Android version of the iO.  Here’s the video from PhotoGearNews:

Beoncam 360 camera watch is fully funded on Indiegogo; why I backed the project
Sample 360 video from Ulefone VRKAM, a 360 camera accessory for Android
Comment