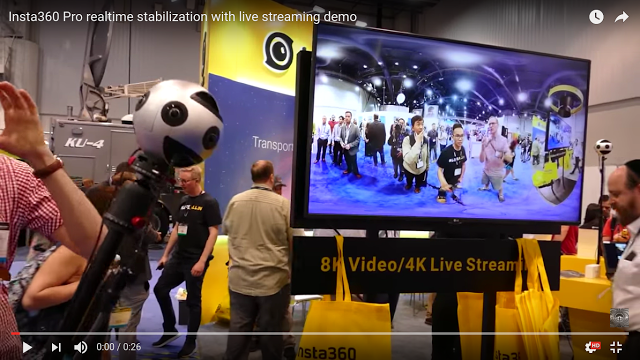 Insta360 had a big presence at NAB Show 2017.  I checked out their booth along with my friend Svend Even Haerra from NRK, the Norwegian Public Broadcasting Station.  I got to see some new footage from the Insta360 Pro as well as see a demo of its realtime image stabilization, and I found out other interesting news.

In fact, IMHO, it looked as good as, if not better than the $45,000 Nokia OZO.  I know that sounds preposterous, but you can see for yourself with these samples from the Insta360 Pro.  Here is a sample by National Geographic posted on YouTube.  It’s down-rezzed to 4K, and not the original quality, but the original will be available for download on Insta360.com.  Meanwhile, here’s the YouTube sample:

We also got to see a demo of the live streaming from the Insta360 Pro.  The video looked quite detailed, although I could only see it on a large TV and not a headset.  I was surprised that even though it was only using template-based stitching, the stitching still looked quite smooth (again, with the exception of near objects).  But most interestingly, they showed that the Insta360 Pro has realtime image stabilization (horizon leveling) that works with the live streaming!  The stabilization was very smooth – smoother than the realtime stabilization on the Insta360 Nano.

Here’s a video of the realtime stabilization with live streaming:


And here’s a new video from Insta360 explaining the stabilization feature:


Insta360’s Pro and Nano are thus far the only 360 cameras to have realtime stabilization.

Based on what I’ve seen so far, I believe the Insta360 Pro will be a very popular 360 camera for 360 video professionals.  It is available for preorder at B&H Photo (free shipping; shipping May 18) or directly from Insta360 (shipping mid-May).

The Insta360 Pro wasn’t the only one attracting attention at the exhibit.  A lot of people were interested in the Insta360 Nano, some of whom did not even know about it.  It seems many people were impressed with the realtime stabilization feature (see this demo).  By mid-day, Insta360 sold out of all their Insta360 Nano units on hand even though they weren’t offering any discounts at NAB.

As for the Insta360 Air, representatives reassured me that the realtime image stabilization would be added to the Air as well, within a “few weeks.”  (Some said this week, but I think that’s optimistic.)  UPDATE: realtime stabilization is now live!

Meanwhile, I was asking Insta360 what they thought about the Yi 360 VR.  Yes they had seen it and they knew about its price and features.  And their reaction was one of confidence.  They didn’t want to say anything specific but they just said to wait for news about the Insta360 Nano 2.  They only pointed to this post on Twitter by a content producer and Insta360 fan reacting to the GoPro Fusion (with 5.2K resolution):

So it appears we have even more exciting news to come in the next few months!