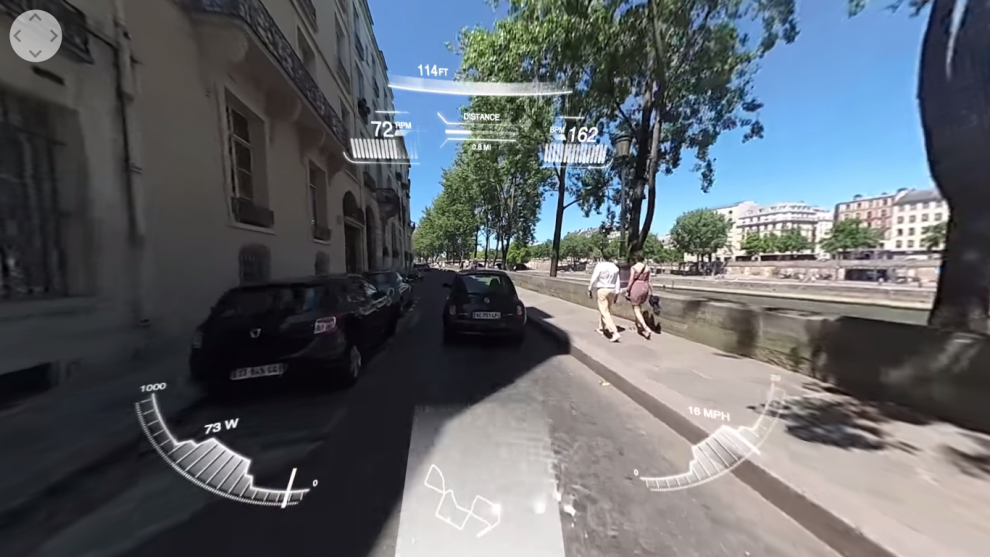 DCRainmaker posted a new sample from the Garmin Virb 360, this time highlighting one of the Virb’s stabilization modes, called “Follow” which is smart enough to maintain a view toward the direction of movement, an incredibly useful feature.
Here is the video:

To understand Virb’s follow stabilization, let me contrast that with the conventional image stabilization in the Insta360 Nano, Insta360 Air and Xiaomi Mi Sphere:  on these three cameras, when the camera is stabilized, then it will hold that view regardless of where the camera is turned.  This is excellent for providing maximum stability.

But what if you are moving and you want the camera to keep facing the direction where you’re moving?  On the Nano, Air and Mi Sphere, the app itself won’t be able to adjust the view.  It is possible to use software to re-set the heading every time I change my direction, but it’s tedious and won’t look natural.

The Virb’s follow mode is unique in that the heading can lock onto the direction of movement instead of a static direction (it can do that too in another stabilization mode).  While locked to that direction, the viewer is nonetheless free to ‘look around’ the 360 video.

The video also demonstrates the Virb’s remarkable stitching.  Ray rode his bike along busy streets with many buildings.  Normally, buildings are a very unforgiving subject that can reveal stitching errors easily.  Here’s how the buildings typically looked like along the ride.  The stitch line, in case you’re wondering is diagonal (around 45 degrees from upper right to lower left). 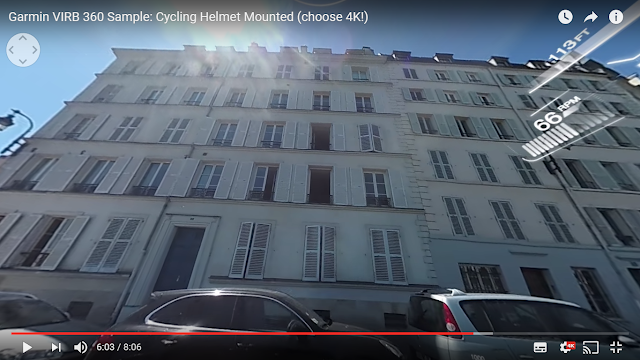 Were it not for the sun’s glare, I think the stitch line would have been undetectable!  Moreover, you can see that the stitching is smooth from all the way at the top of the building to the car parked on the curb, showing seamless stitching over a wide range of distances (from near to far).

Here’s another scene, also with a diagonal stitch line. 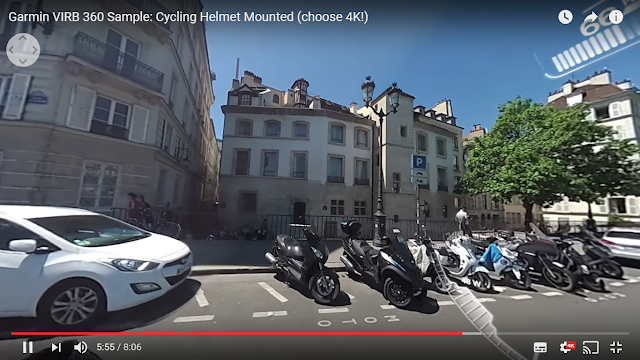 Having said that, there was a visible warping right at the stitch line, visible in some of the scenes: 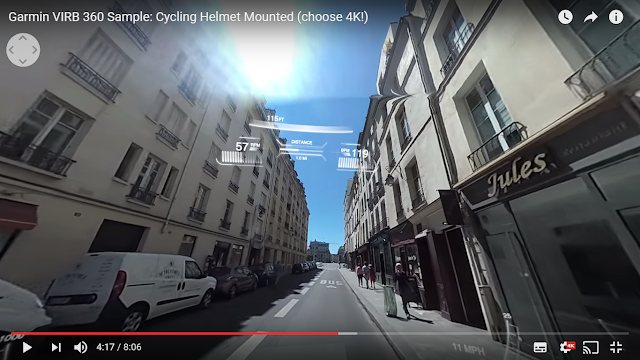 But to me, it did not look too distracting because the overall geometry was correct.  For example, in the sample you can see that the angle of the gutter was perfectly aligned on both lenses.

BTW Ray said that the video here was stitched in-camera and then stabilization and the G-Metrix overlay was later added with Virb Edit.

I’m very much looking forward to the Virb, which is now available for preorder from Amazon or from B&H Photo.  If you can afford it, the Virb seems to be the most amazing and practical 2D 360 camera that’s been announced to date.  (Yes I ordered one and will be testing it as soon as I get it.)  Meanwhile, it is also possible to have stabilized follow mode (in addition to the normal lock mode) with the Guru 360 gimbal or Feiyu G360 gimbal.