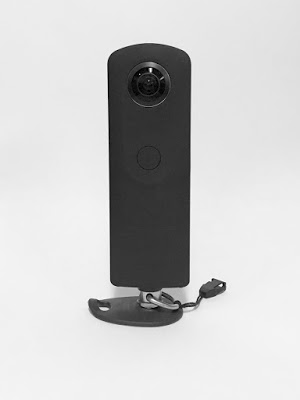 One of the rumored announcements at Photokina was the successor to the Ricoh Theta S (reviewed here), but there was no announcement.
Ricoh has announced a Ricoh Theta every year since 2013:
It therefore seems very likely that Ricoh would announce a new model this year.
Sven Neuhaus was at Photokina and visited the Ricoh booth.  While the Theta was represented at the booth, there was no new Ricoh Theta shown or confirmed.
Ricoh has said that they are aware that customers want 4k capability and livestreaming but they did not say whether they would be able to a Theta with such capabilities.  I remain optimistic about livestreaming because the Theta S already has livestreaming (but requires an HDMI or USB connection to a computer).  Moreover, Ricoh already said they will add “video communication” features to the Theta.  As for 4k, I think that could be a challenge because of overheating due to the very compact body of the Ricoh Theta.
If there will be an announcement, the next possible announcement is at PDN PhotoPlus from October 19 to 22, 2016 in New York.

Briskeye: three 360 cameras with 4k livestreaming for industrial and commercial use
The undiscovered VR painting and sculpting app for the HTC Vive
Comment