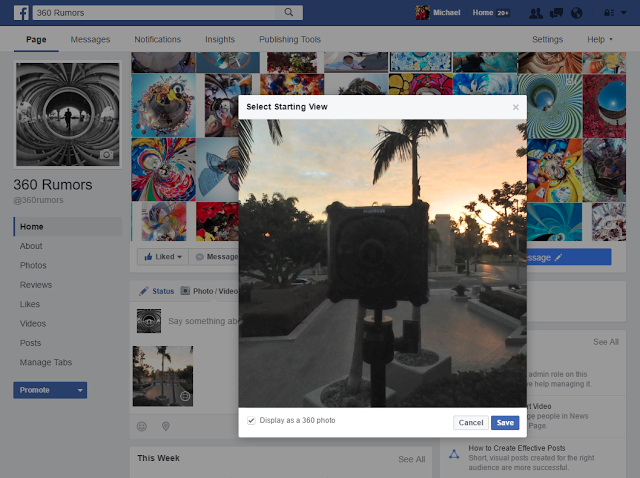 When a photo or video from the Nikon Keymission 360 (reviewed here) is uploaded to Facebook, it will now be recognized automatically as a spherical 360 photo or video.

PHOTOS
In order for the Keymission photo to be recognized as a 360 photo, you have to upload it as a post to your timeline, instead of adding a photo to an album.  This works on timeline posts from either your desktop or smartphone.  When posting a photo from your smartphone, you’ll see a little globe when you tap on the photo, indicating that it’s recognized as a 360 photo (see the Keymission photo I tapped on, in the middle of the bottom row, which has a globe icon on its bottom right corner): 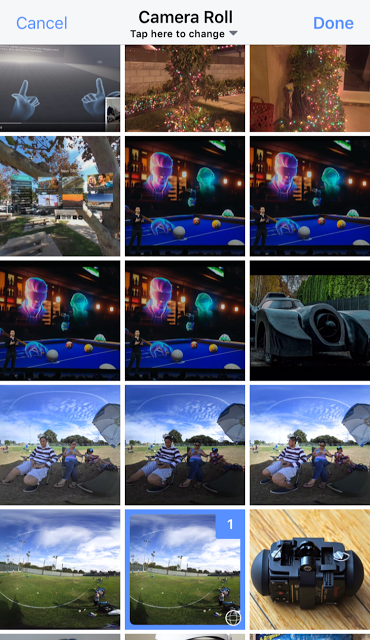 There are a few limitations.  First, if you post a 360 photo to an album, it won’t be recognized as 360.  Second, each post can only include one 360 photo.  If you try to post several 360 photos at the same time, only one will be shown as a 360 photo, while the others will be shown as equirectangular photos.  Third, if the photo is edited on a third party app, it might not be recognized as 360.  [If this happens, you’ll need Exif Fixer or something similar to fix the 360 photosphere metadata].   Note: These limits apply to all 360 cameras, not just the Keymission.

VIDEOS
Facebook now supports Keymission 360 videos as well.  The process for posting 360 videos is similar.  You have to post it to your timeline.  When you post the video, you won’t get an indication that it’s recognized as a 360 video.  You’ll only get a popup that says Facebook is processing the video.  After a few minutes, you should see a notice that your video has been posted, and hopefully you’ll see the video is in 360.

Despite the limitations on posting 360, it’s great to see Facebook supporting newer 360 cameras like the Keymission 360, which makes sharing 360 photos and videos much more convenient.