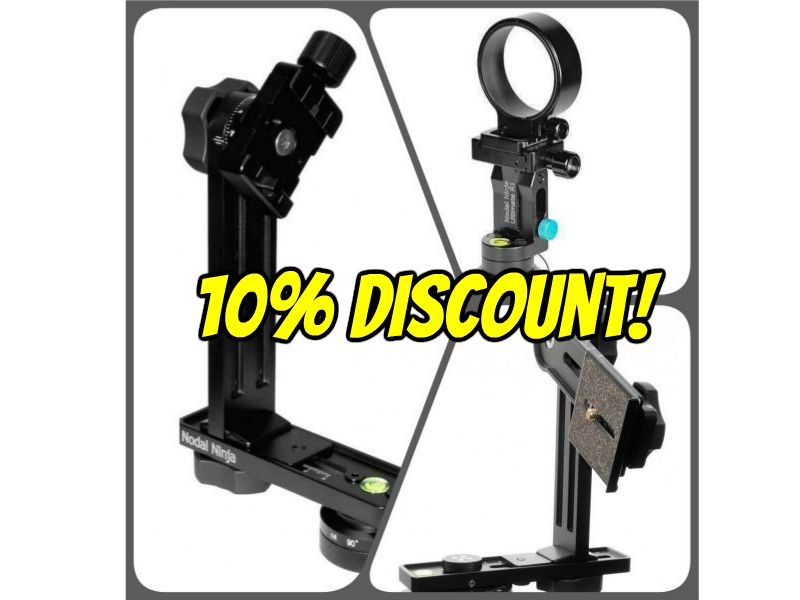 How would you like to shoot a 85-megapixel HDR 360 photo in less than one minute?  In this post, I’ll discuss how Nodal Ninja panoramic heads will enable you to do that.  I’ll also discuss the differences between the panoramic heads that they offer, and finally, how you can get a 10% discount, only until around July 26, 2018.

What is Nodal Ninja and why do so many 360 shooters recommend it?

Nodal Ninja is a brand of panoramic photography equipment.  They’re well known not only because they’ve been around since 2004, but because their products work reliably.  That’s why Nodal Ninja has been trusted by professionals and Fortune 100 companies.

When I first started shooting 360 panoramas, I tried to save money by buying a cheap panoramic head.  It did work, but there were a few stitching errors.  I didn’t mind, to be honest, because I was just excited at the thought of getting such a detailed 360 photo. 🙂  But I got curious about why people kept recommending Nodal Ninja, so I decided to try it out myself.

Or how about the fact that the NN logo on the lower rotator made it easier to find the center of the camera?  There are many other little touches that add up to make the Nodal Ninja more repeatable.  Even though the Nodal Ninja cost around $100 more than the cheap panohead that I got, there was no question that it was a keeper.  Since then, I’ve tried other products that they have and they have all worked very well.

What is a panoramic head?

A panoramic head avoids parallax stitching error by enabling you to position the camera to shoot from the no parallax point (aka nodal point).  If you shoot from the no parallax point, the point of view will be the same no matter which direction the camera is aiming.  Because the photos you take will be from a consistent point of view, then they can be easily stitched without parallax stitching errors.

Here is a tutorial for finding the nodal point:

What are the differences between the Nodal Ninja panoramic heads?

One thing that I think Nodal Ninja could do to improve is to explain their products better.  They have a dozens and dozens of parts, and to a beginner, it’s not immediately apparent which products you need, or what the differences are between similar-looking products.  So here is an introduction to the most basic Nodal Ninja panoramic heads:

Let’s discuss these types of panoheads.

Nodal Ninja 3 and 6 are both multi-row panoramic heads.  That means that you can use them to take a panorama with the camera pointed in any direction.  This enables you to use them for a wide variety of cameras and lenses.  The difference between Nodal Ninja 3 and 6 is the size.  NN6 is longer, which means you can use it with longer lenses and/or larger camera bodies.

For 360 shooters who are taking photos for virtual tours, NN3 is usually enough.  You only need NN6 if you want extra high resolution (by shooting with a lens with longer focal length).

NN3 and NN6 can work with almost any camera as long as they fit, so they are more versatile than the R series or RS series.  For NN3, the maximum length of the lens plus camera is up to around 12 inches.  For NN6, the limit is 15 inches.

Here is a tutorial for multi-row panoheads, including Nodal Ninja 3, 4, 5, and 6.

Nodal Ninja R1 and R20 are single-row panoramic heads, designed for faster shooting with a fisheye lens.  You’ll be able to take a 360 photo in as little as 3 or 4 shots, in just one row.

R1 and R20 are ring-mount panoramic heads, which means they have a lens ring that clamps onto your lens, so your camera is actually suspended.

The difference between R1 and R20 is that R1 can be tilted in many angles, while R20 has only two tilting angles.  The fact that the R1 can be tilted down is useful for taking nadir shots.  The nadir shot won’t be from the nodal point, but because the floor is a flat surface, it can be skewed to change its perspective to make it appear as if it was shot from directly overhead.

For the clever readers, you may be wondering, can’t you use the Nodal Ninja 3 or 6 for a single-row panorama as well?  And the answer is, “Absolutely!”  Compared to using a Nodal Ninja 3, the R series is smaller and easier to bring.  And for more advanced panorama shooters, you can use the R series to shoot photos diagonally.  The advantage of doing that is to be able to capture single-row panoramas using a full frame / diagonal fisheye lens.

In summary, the R1 and R20 are faster to use, but are less versatile because they’re only for fisheye lenses, and you usually have to buy a lens ring for each lens (although some lenses use the same size lens ring).  Here is a tutorial for using the R series.

Note that you will need both the R1 or R20 and the lens ring for your fisheye lens.  This item includes both the panohead and lens ring.

The RS series therefore lets you shoot with a lens diagonally, just like the R series.  At the same time, because it is multi-row, you can shoot the zenith or nadir more cleanly if you have to, e.g. to take a photo of an elaborate chandelier or carpet.  Notably, the RS series works with the Nadir Adapter for Nodal Ninja 3 mk II, which lets you take a clean nadir shot from the same height as the nodal point.

There are two RS panoheads: RS-1 and RS-2.  RS-1 is for smaller cameras, while RS-2 is for larger cameras.

The RS series is actually an endangered species because it is based on the previous version of the Nodal Ninja 3, the mark II.  Since the mk II is being replaced with the mk III, the RS series is going to be discontinued.   The good news is that if you like the RS Series, they are on clearance and you can get them at a very good price.   And if you already have a Nodal Ninja 3 mk II, you can simply get an upper rotator and clamp to use the Nodal Ninja 3 as an Rs-1.

Which lens should I get?

With a multi-row panohead, you can use almost any lens that is shorter than your panoramic head, but most 360 panoramic shooters use fisheyes because they can capture 360 photos without needing too many shots. 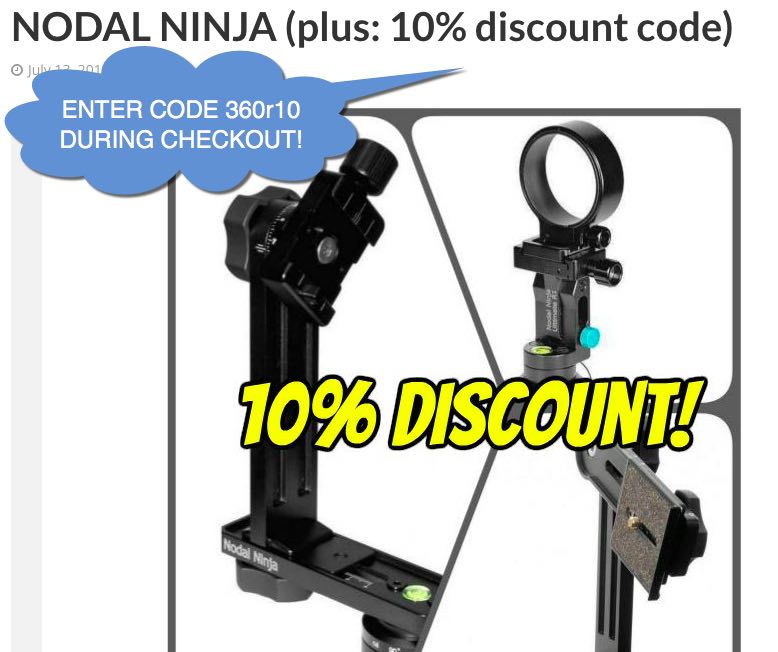 FYI they do have a 30 day return period, and their store is based in Arizona, so you can try it out for yourself to see if it’s really better than the panoramic head that you have (or if you want to try shooting a 360 panorama for the first time).

Enhancing your virtual tour with a flythrough video – see this sample

Theasys.io Tutorial: a powerful and FREE virtual tour software
360 Brain Teaser: how a Sony a6000 beat a Sony a7R for a virtual tour 360 photo
Comment