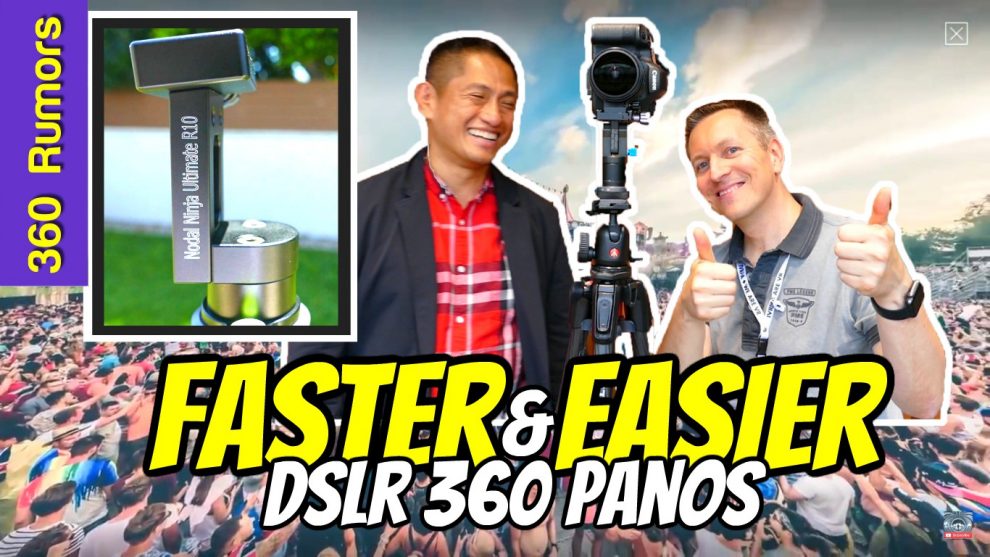 360 photos shot with a DSLR and a panoramic head have much higher quality than typical 360 cameras, but they also take more time to shoot.  However, there is a faster and easier way to shoot panoramas with a DSLR — using a ring mount panoramic head, such as the Nodal Ninja R Series.  For this tutorial, I invited an esteemed guest: Peter Van den Wyngaert (LittlePlanet.be), who won 1st prize at 360 Cities’ Panoramic Video of the Year, and also won the grand prize at IVRPA’s Street View Challenge 2018.

Last week, I posted a tutorial for shooting with a multi-row panoramic head.  In that tutorial, I mentioned that for virtual tours, fisheye lenses tend to be more popular because they require fewer shots, which not only saves time, but also means there is less chance for stitching errors.

Taking that logic one step further, it is possible to shoot a fully spherical 360 photo with just 4 shots from a circular fisheye or a cropped circular fisheye, using a single-row panoramic head, such as the ring mount Nodal Ninja R series (R1, R10*, and R20).  The R series uses lens rings that allow the lenses (not bodies) to be mounted on the panohead. *The R10 with fixed tilt has been discontinued and replaced by R20.

The R series is much more portable and because it is a single-row panoramic head, it reduces the chance of shooting error compared to using a multi-row panohead for a single-row capture.  It is also more compact.

Here is the tutorial on how to use the Nodal Ninja R Series single-row ring mount panoramic head:

Note: I added the following info about lens compatibility to Peter’s presentation:

As I mentioned in the video, a single-row panoramic head will require a lens that is sufficiently wide in order to produce a fully spherical panorama.  You can use either a circular fisheye, or a cropped fisheye (180 degrees on the long edge).  Here are examples.

Full frame fisheye or diagonal fisheye (180 degrees on the diagonal): If you don’t roll the lens, it will not be fully spherical on a single-row panoramic head but this can be almost fully spherical if you roll the lens, such that the diagonal of the frame is vertical to the scene and covers the zenith and nadir.  There will usually be a star-shaped gap in the nadir.  Also note that more shots will be required (usually 8 shots), which means more possibility for stitching errors.
Number of shots required: 8 or 6

Here is a list of fisheye lenses and their sensor coverage

WHAT DO I NEED TO BUY and HOW MUCH WILL IT COST?

Here’s what you need to get in order to shoot fully spherical 360 photos with a ring mount panoramic head such as the Nodal Ninja R Series.

If you have a mirrorless APS-C sensor, a good option is the Samyang 7.5mm f/3.5 ($219), a lens that is actually a full frame fisheye lens designed for Micro Four Thirds but can be used with mirrorless APS-C cameras to yield partial circular fisheye coverage, with good results.  If you will use this combination, you’ll need the Nodal Ninja conversion kit for your mirrorless APS-C camera.   (Fanotec also sells a conversion kit for Sony E-Mount, Fuji X-mount, Canon EF-M mount, or Samsung NX mount).  This is the combination I got for my Samsung NX500 camera, and when the lens and kit arrive, I’ll post a comparison with my other fisheye lenses.

For full frame mirrorless, Samyang 8mm 2.8 II with a shaved hood will result in a cropped circular fisheye.

3. Nodal Ninja R series panoramic head with rotator.  Fanotec has the R1 and R20 (the R10 is discontinued).

5. Stitching software.   There are many available.  PTGui and Autopano Pro ($115) or Autopano Giga ($250) are popular.  I also like Panorama Studio 3 Pro for its ease of use and good stitching.  All of them have trial versions available.  Or you can get Hugin, which is free but more difficult to use.  Update: I found that for diagonal fisheye, Panorama Studio works well.  For circular fisheye and cropped fishey, PTGui works better.

Here is an affordable but decent quality kit:

Here is a sample with the Sony a6000 and Samyang 7.5 with conversion kit and R series:

Easy 360 photo animation app: you can share 360 photos as an animated video with this FREE smartphone app!
You Too Can Learn from the Legends at IVRPA!
Comment