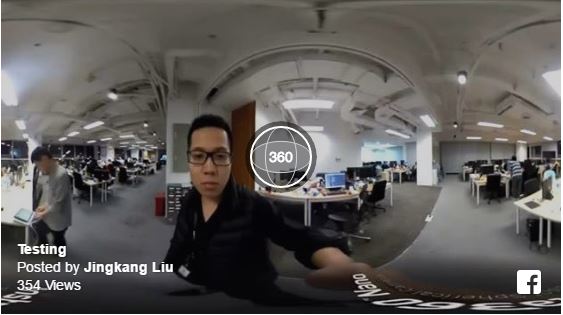 Insta360 demonstrated a 360 video live stream with realtime image stabilization.  Check out the 360 video!  (This is NOT an April Fool’s joke.)

A few weeks ago, Insta360 announced the amazing news they were adding realtime image stabilization to the Insta360 Nano and Insta360 Air, 360 camera accessories for the iPhone and Android respectively.  Image stabilization (or more precisely, horizon leveling) is very useful for 360 videos because it makes videos much more watchable.  To that end, 360 content producers have usually employed 3-axis gimbals (costing up to $2,000) specially designed for 360 cameras, or software image stabilization via expensive, time-consuming, and complex professional video editing software.

By adding realtime image stabilization, the Insta360 Nano and Insta360 Air will become the first commercially available 360 cameras with such a feature at any budget.  The fact that the Nano and Air are affordable 360 cameras ($199 and $129 respectively) makes the news even more remarkable.

A few hours ago, Insta360 posted a video on Facebook that demonstrated the realtime image stabilization capability during a 360 live stream, proving beyond the shadow of a doubt that it is real.  In the video, Mr. Jingkang Liu walks around while rotating the Insta360 Nano every which way.  With a conventional video, that would have made the video unwatchable, yet with realtime image stabilization the video remains level and pointed at the same direction.  Check out the 360 video! (You can look down at the Insta360 logo to see how Mr. Liu is moving the camera erratically to test the stabilization).

Insta360 hasn’t said exactly when it would be released, but we’re very much looking forward to this marvelous feature!