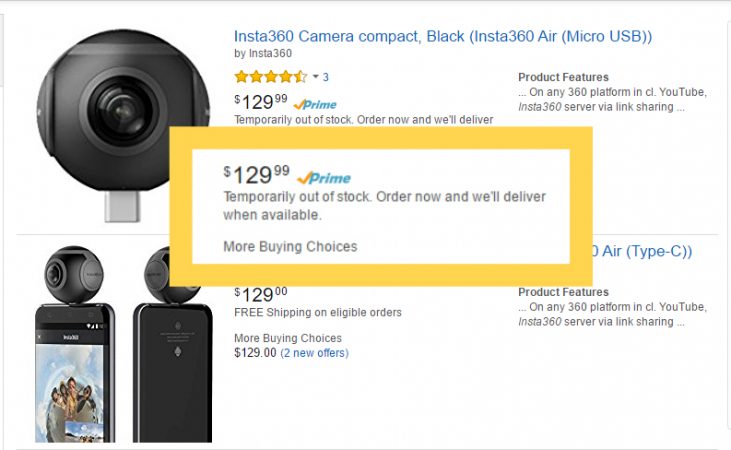 I reviewed the Insta360 Air the other day, declaring it the best 360 camera for personal use (if you have a compatible Android phone) and indeed, it is selling so quickly that the Micro USB version is now sold out at Amazon, its official distributor.  But don’t worry, here’s where to find it.

So the secret is out!. Insta360 Air is one of the hottest 360 cameras on the market.  TBH, it’s not really so surprising, considering the image quality that you get and features such as wireless 360 live streaming in one of the most affordable 360 cameras.  Little wonder then that the Air’s Micro USB version is now sold out at Amazon, its official distributor.  (The Type C version is still available.)

Of course, Amazon will be able to replenish the stock.  But here’s the thing: it’s going to sell even faster when realtime image stabilization is implemented.  It would be like having a $200 to $300 stabilized 3-axis gimbal (with invisible motors) built into a $129 camera!  If you have a compatible phone, it would become a must-have 360 camera even if you already have one.  Note: For iPhone users, the Insta360 Nano ($199; reviewed here) will have realtime stabilization as well.

So if you want to get one but it’s out of stock at Amazon, where else can you find the Insta360 Air?  Insta360 has another US distributor: B&H Photo — and yes, they have the Micro USB version in stock!  (The Type C version is currently for preorder at B&H Photo but is available at Amazon) 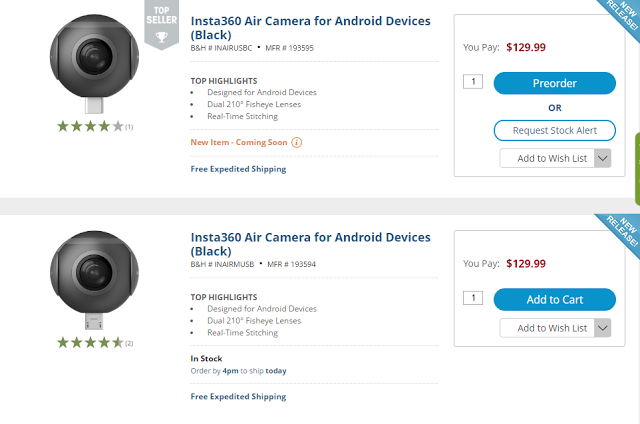 If you would like to purchase the Insta360 Air, kindly consider using the affiliate links above, which would support 360 Rumors at no additional cost to you, so I can do more tests and reviews. Thank you very much.