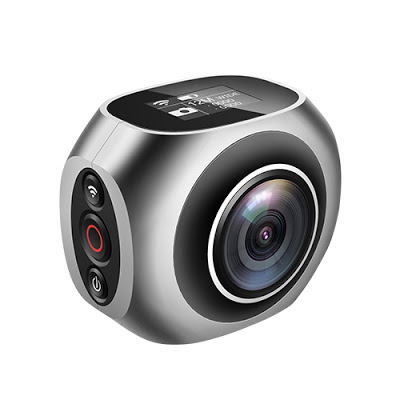 In the last several months, we have seen many inexpensive 360 cameras but the majority of them are hemispherical.  Now, we are also beginning to see low cost fully spherical 360 cameras.  Eken Pano360 is one such camera.

Here is a video by Armdevices.net showing the Eken Pano360:


As the rep said in the video, it might be available in 2 months.  There’s no information yet on pricing.

The H360 and R360 look almost identical (the H360 has a silver rim around the lens while the R360 has a black rim) and they have almost identical specs:
– hemispherical with 190-degree field of view
– video resolution: 1440p @ 30fps
– 4mp (not sure if sensor resolution or photo resolution)
– 1.5-inch LCD
– 1200 mAh battery
– Wi-Fi control
The only difference between them is that the R360 is listed as having a remote.

Eken has made other 360 cameras, such as the Eken H8.   Pano360 is their flagship product that will compete with other low-cost fully spherical 360 cameras such as the Elecam 360.

Playstation VR now sold out at Amazon and some retailers
TECHNIQUE: Add a cool border to your tiny planet photo
Comment