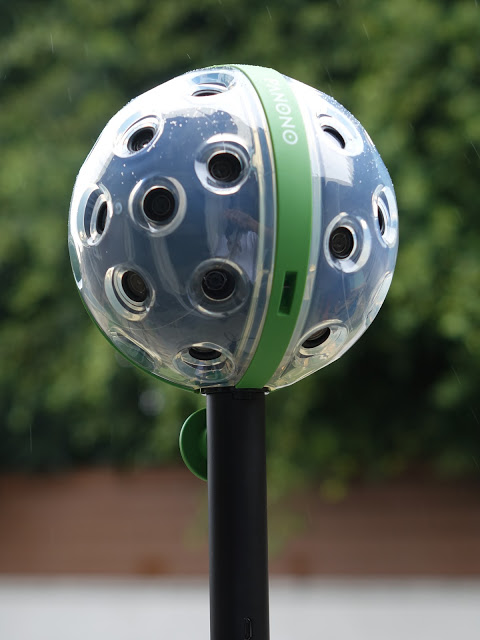 I finally pulled the trigger and got the Panono!  Am I experiencing buyer’s remorse or were my expectations exceeded?  Here are my first impressions.

The Panono is a ball-shaped 360 camera with 36 lenses.  It can capture 108-megapixel photos, which had been the highest resolution for an all-in-one 360 camera for a long time, and overtaken only recently by the Staro (136 megapixels).

I’ve always wanted a Panono.  From sample photos, I found its image quality to be amazing not just for its resolution but also its dynamic range.  But I was intimidated by the stitching.  I knew that there was no in-camera stitching, and no stitching app on the phone.  Instead, its photos would have to be stitched through Panono’s cloud.  I felt like I had little control.  I also heard some say there’s a subscription fee for the cloud (I later found out it is not true, unless you want to remove the logo when viewing on their page.)  Finally, not too long ago, Panono raised their prices by around 33% to $1999 USD plus shipping.  Those things made it harder for me to decide to get it.

The thing with Panono is, it doesn’t have any real competition.  Staro would have been nice but they don’t seem to answer emails or indicate how to purchase their camera.  Either you need high-resolution 360 photos in one shot or you don’t.  And if you do, Panono is still the only 360 camera that does that and is readily available.  So I got one from B&H Photo.

The Panono came in a simple cardboard box with no frills.  There were instructions, a Micro USB cable, and then the Panono itself. 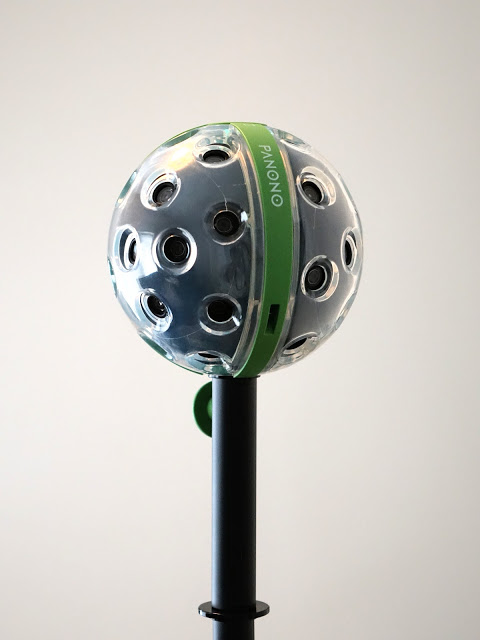 The Panono was smaller than I expected.  It is about the same size as a shot put for men, 11cm in diameter.  It is neither heavy nor light.  It weighs about as much as I thought.  The body is covered with polycarbonate plastic and feels very solid and high quality.

Anyway, I took my first test shot.  Far from being as complicated as I feared, the process is actually pretty simple:
1. Download the Panono app to your iOS or Android device.  Create an account on Panono.
2. Turn on the Panono.
3. Connect your smartphone to the Panono’s Wi-Fi signal.  Connecting to the Panono’s Wi-Fi was totally painless unlike the Nikon Keymission 360.
4.  On the Panono app, press the shutter to take a shot.  (There are settings for manual exposure and white balance).   Within a few seconds, you’ll get a rough preview of the photo.  You can either download the photo from the camera to your phone, then upload from your phone to the cloud, in separate steps, or tap the new “move to cloud” option which does both.
5.  Normally, the app won’t upload the photo until you disconnect from the Panono.  However, if you are ok with uploading via your phone’s wireless service, it will begin uploading to the cloud.  When you upload the photo, there will be a countdown estimate of how long it will take to finish the upload.  Uploading is generally quick — only a few seconds (of course this depends on your internet speed).
6.  Once a photo is uploaded, the Panono servers will process your photo.  It will take about 10 minutes.  The app shows the estimated time remaining.  When processing is done, the stitched photo will appear on your Panono directory.

Unfortunately, my first test shot was horrible.  I took it at our small home office and the stitching was quite bad.  Literally, it was the worst stitching I’ve seen.

That puzzled me because posted samples from the Panono looked like they had decent stitching.  It turns out that the minimum shooting distance is 1 meter (due to parallax), according to the tech support rep I contacted.  Obviously, anyone who has shot with 360 cameras even for a little while knows about parallax.  But I didn’t expect the minimum distance to be so large.  In fact, in practice, it seems even larger than that, although I haven’t figured out the limit.  Panono’s creator Jonas Pfeil has said in Panono’s forums that for the best stitching, Panono needs many distinct features that it can use as control points.  The worst case scenario would be a room with white walls, which would make it difficult for the computer to identify control points.

After I got the hang of taking some samples, I ventured to try Panono’s famous “Throw” mode.  When you throw the Panono into the air, it will take a photo at the apogee.  It turns out this doesn’t even require any switches.  The camera just has to be turned on.  It will automatically detect when it is thrown.  The only limits are: the Panono must not rotate or spin too much in the air, and the minimum throw height is 1.5 meters.
In the real world, throwing it without spinning takes a lot of practice.   I tried it out at a playground with rubber mulch (just in case I fail to catch it).  Out of 10 attempts, perhaps only 1 succeeds for me.  Maybe I’ll get better in the future.

Overall, I’m pleased with the Panono.  The quality is about as good as I expected.  It’s sharp, and has very good dynamic range.  With the HDR option, the dynamic range becomes fantastic, and the combination of exposures looks realistic, not “HDR-ish.”  There is very minimal chromatic aberration, a little bit of flare, but no major problems.  Stitching is good but usually not perfect.  It’s amazing that they can stitch 36 photos together and have it look relatively smooth.  However, there are often stitching errors where you would not expect, such as a straight line having a broken segment.

I was surprised by the Panono’s usability.  It’s more usable than I expected.  It’s reasonably portable and easily fits in my JJC bag with the tripod adapter attached.  The selfie stick won’t fit in my bag, but it’s fine I guess.  Stitching takes a few minutes but the process from shooting to getting the photo uploaded is very easy and painless.
Suggestions:
– I was surprised that their app had no self-timer.  I wish they would add a self-timer.
– I also could not download my own stitched photos from the Panono app.  Instead, I would need to go to Panono website to download those photos. It would be so much more convenient if you could download them from the Panono app.
– It’s nice that you have manual exposure.  I wish they could add exposure compensation to their auto exposure.
– Lastly, I hope they improve their stitching algorithm even further.
UPDATE
Here are more recent samples.
I look forward to taking more shots with the Panono.  I’ll post a review when I’ve had more experience with it.  Panono is $1999 plus shipping when purchased directly from Panono, but it’s also available in the US from B&H Photo, where it is currently $1999 with free shipping and free accessories (the tripod adapter, selfie stick, carrying case, and messenger bag).