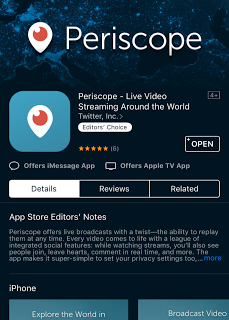 Periscope 360, which enables 360 live streaming on Periscope and Twitter, is now being released to the next group of beta testers.  Here’s how to sign up.

To use Periscope360, you’ll need the following:
– A Periscope account (a Twitter account can also work for Periscope).
– A compatible 360 camera.  Currently, the only 360 camera officially compatible with Periscope 360 is the Insta360 Nano.
– The updated Periscope app.
– Minimum of 5 mbps connection speed.  You can check your speed using Fast.com.

To get on the waitlist for the updated Periscope app, go here (be sure to create a Periscope account first).

If you are selected, you’ll receive an email giving you a link to download the beta app.  Once you have everything you need, check out this tutorial.  Periscope also has an official guide here.