Pisofttech Pilot Era is a compact professional 360 camera with in-camera stitching up to 8K 360 resolution.  Here are hands-on impressions based on a prelease unit that I’ve been testing.   I also show full resolution sample 360 photos and 360 videos.  May 8, 2019 update: now live on Indiegogo.  April 11, 2019 update: video resolution increased to 8K 24fps (firmware 4.1.1). 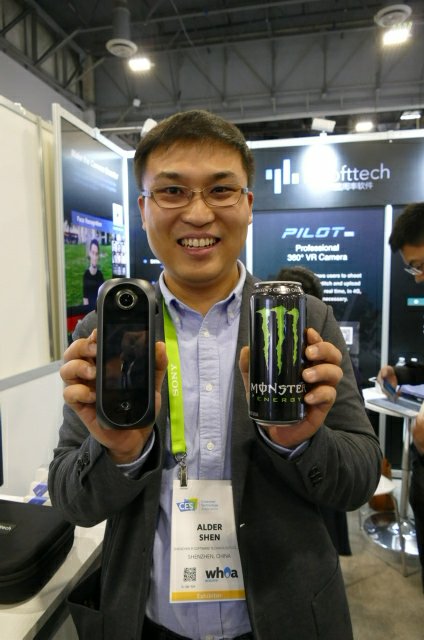 At CES 2018, I met Pisofttech’s CEO Mr. Shen and CPO Mr. Gao and they explained that Pisofttech specializes in software and has been working with 360 camera manufacturers for a few years now but has finally decided to create its own camera, hence the Pilot Era.

Pisofttech Pilot Era is a powerful yet compact 360 camera with 8k video, 32mp photo, and innovative features such as a built-in touchscreen.  But what I think is most impressive is how quickly it can stitch 8k or 6k video. Update: added HDR sample photos.

The Pilot Era is very compact, with about the same dimensions as a regular-sized 16 oz. Monster Energy drink.  I had a chance to use it at IVRPA 2018, and Pisofttech has sent me a beta unit (with nonfunctional audio) for testing.

Here are the specifications:

Thanks to Pisofttech’s expertise in software and AI, the Pilot Era has several unique features:

2. In-camera stitching for 8K 24fps video.  With 8K video, stitching is not in realtime but can be done entirely in-camera. It takes approximately 2 mins to stitch 1 minute of video. By comparison, Insta360 Pro’s in-camera stitching takes 14.4 minutes per minute of video. Most other 8k 360 cameras can’t stitch 360 video at 8K at all and instead require a powerful desktop for stitching.  If the user wishes to use third party stitchers, the camera can output to fisheye format.

3. A hybrid stitching approach. Some cameras use simple template based stitching which is fast but can only stitch correctly at one distance. Anything farther or closer will have stitching errors.  Other 360 cameras use optical flow stitching for smoother stitching but it is very processor-intensive and time consuming. Pilot Era uses a hybrid stitching approach that Pisofttech claims to be comparable in accuracy to optical flow stitching but is much faster. In the demos we did, the stitching looked smooth for anything at least one meter away from the camera. The zenith also looked smooth because the Pilot Era’s lenses are pointed slightly upward, resulting is more overlap at the zenith. The nadir stitching was less smooth but was still decent.

4. Stabilization. Pilot Era uses AI to stabilize the video in addition to an internal 9-axis IMU.

5. Intuitive touchscreen controls. The Pilot Era has a color touchscreen with controls that are as intuitive as the controls on a smartphone camera.

8. Standalone live streaming; concurrent recording.  The Pilot Era can live stream without being connected to a computer, via Wi-Fi, Ethernet, or a 4G cell phone signal.  It is also one of the few 360 cameras that can record the video while streaming at the same time.  This enables the user to upload the recorded video after the stream for better quality.

9. In the future, they will add additional AI features, such as face recognition, gesture recognition, and being able to generate a depth map from a 2D 360 video.

Here are samples.  This one is by McLarty Films:

Here are older samples: In this montage, the first 2 clips are at 8k 22fps.  Starting around 0:45 there are four sample clips at 6K 30fps

To me, the video samples have impressive detail. The dynamic range could be better, but it’s not bad. I also like the natural-looking colors and contrast. Stitching is better than I expected for a camera of this size, and looks quite smooth except at the nadir.

Here are sample videos I’ve taken with my prerelease unit, which has non-functional audio (at the time these were shot, the frame rate was 20fps, but it is now 8k 24fps):

Here are sample photos from the Pilot Era, shot by Pisofttech at IVRPA 2018:

According to their representative, users can select the exposure interval for the HDR shots, up to +/- 4EV.

How to use Pilot Era; hands-on first impressions

Pisofttech sent me a prerelease version of the Pilot Era, which I have been testing. Here are my first impressions.

The camera is very compact compared to other professional 8K 360 cameras I’ve used such as the Insta360 Pro, Insta360 Pro 2, Kandao Obsidian, or Detu Max.  It is also much more compact compared to the Z Cam S1, a professional 6K 360 camera that also uses four lenses, like the Pilot Era.  The Pilot Era’s compact size makes it easy to bring it everywhere and shoot with it without drawing too much attention.

Shooting with the Pilot Era is very intuitive.  The screen shows four shooting modes: photo, unstitched video (with four dots), stitched video, and Google Street View.   For each shooting mode, you can choose your desired resolution and framerate.  The photo mode also has an HDR option.  For video mode you’ll also be able to adjust the stitching distance.  As of April 2019, the stitching appeared to be purely template based, albeit adjustable.  I did not see evidence of a hybrid stitching feature.

For stitched videos, the videos will be immediately viewable on the gallery, which you can access either from the thumbnail on the bottom left corner of the live view screen, or from the main menu.  For unstitched videos, you’ll see an outline of a jigsaw puzzle icon, which indicates it is unstitched.  Tapping on the jigsaw puzzle icon initiates stitching, which is quite fast for an 8K video (around 2:1 ratio).  The workflow is very convenient, and it is actually easier to use than most consumer 360 cameras (and professional 360 cameras), although I wish that it had batch stitching.

As for image quality, the videos look detailed although the dynamic range does not appear that much different from consumer 360 cameras.  Another issue is the stabilization.  Although the video is stabilized, the four lenses seem to follow their own stabilization, which do not seem to move in sync (as of the March 2019 version).  I will be conducting further tests to compare the videos to 5.6K and 8K cameras including Insta360 One X, GoPro Fusion, and Rylo.

With respect to storage, Pilot Era doesn’t use an SD card.  Instead it has a large 512GB internal memory (enough for 6.5 hours of 8K video).   I transfer videos to my hard drive through a USB Type C cable.   In addition to its large internal memory, Pilot Era also has a very large 7200 mah battery (sufficient for 3.5 hours of 8K video recording), which is removable and can be charged in-camera via the USB Type C port.

Pilot Era also includes a base stand accessory that can be used to add an Ethernet jack and a SIM card slot for live streaming.

The Pilot Era MSRP will be $2600, but is now on Indiegogo with a few units available at the Early Bird price of $1999.  For more news on the Pilot Era, including an upcoming video of the Pilot in use, please bookmark this page.  In the meantime, here is Pisofttech’s official webpage.