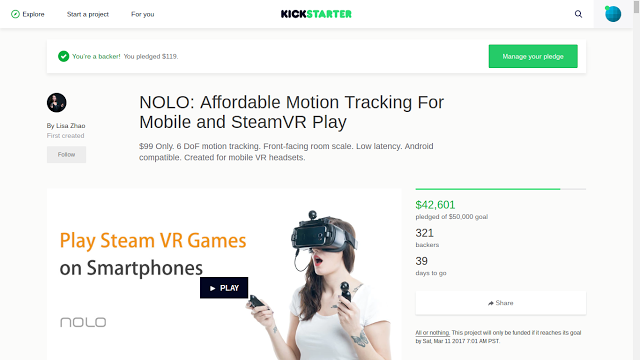 Nolo VR is an accessory that provides positional tracking (6 degrees of freedom) for mobile VR headsets such as Samsung Gear VR, Google Daydream, and Google Cardboard headsets.  Among other things, it enables mobile VR headsets to run games on Steam for the HTC Vive (if you have a VR-ready PC).

Just as I suspected, their Kickstarter campaign would begin earlier than announced.  And it’s on track to meet its campaign goal on its very first day.  It’s available on Kickstarter for $99, with delivery scheduled for May.  As you know, crowdfunding is not the same as a preorder and it can be delayed, or in the worst case scenario, you might completely lose the purchase price you paid.  Having said that, I’ve seen Nolo VR and I’m willing to give it a shot.  Alternatively, you can wait for the retail version to be released.

Technique: using one 360 camera to simulate multiple cameras for multicam video editing
The future of PPV events is in 360 and VR with Next360
Comment