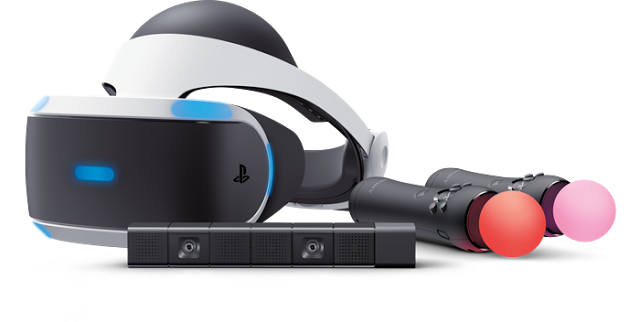 The Sony Playstation VR launched a few days ago on October 13, and the Launch Bundle is sold out at almost all retailers, hinting at a pretty good launch.
The Playstation VR is the third desktop VR system to become available for consumers, but it is arguably the first desktop VR system to have a realistic chance for mass adoption.  The Oculus Rift and HTC Vive both became available months ago (at the end of March and beginning of April respectively) but have thus far not sold in very large quantities, in part because they cost $599 and $799 respectively, and required powerful PCs costing $1,000 or more.  Since then, VR-ready graphics cards have made it possible to get a VR-ready PC for as little as $500 to $750, but the total cost (around $1,300 with motion controllers) still puts the Rift and Vive squarely in enthusiast territory.
By contrast, the Playstation VR headset is only $399 and instead of a PC, it requires only a Playstation 4, which over 40 million people already have.  Sure, it also requires a PS4 camera and Playstation Move controllers, but the total cost is only around $800, a significant discount over the Rift and Vive.  That’s why industry analysts and commentators (including myself) believe PSVR represents the best chance for mass adoption of VR.
When the PSVR became available for pre-orders, preorders were quickly sold out.  In fact, Gamestop said that the PSVR is the fastest hardware to sell out in Gamestop’s history.
PLAYSTATION VR SALES AND AVAILABILITY AT LAUNCH
On launch day, Sony was able to make large quantities of the PSVR available.  Some stores such as Target had only small allocations that sold out immediately, but at the Best Buy near me, they had as many as 45 Core units available, which did not sell out, according to sales reps I spoke with.  Amazon also had the PSVR in stock on launch day.
Early reviews from actual users have been positive (see here and here).
Perhaps because of the positive word of mouth, the Launch Bundle ($499) is now sold out at almost all retailers, including Amazon, Gamestop.com, and BestBuy.com.  Gamestop has a few brick and mortar locations with the Launch Bundle in stock, but there were no locations that had it in stock within 100 miles from Los Angeles.  Similarly, Best Buy has no locations that have it in stock within 250 miles from Los Angeles, though some people reported being able to find Launch Bundle units at their local Best Buy.
There are also Launch Bundle resellers on eBay, where there are completed sales for around $550 to $600.
Meanwhile, the Core unit, which consists only of the headset and a demo disc, is still available online at Amazon and some retailers for $399.  The Core unit doesn’t have the following items from the Launch bundle:
– Playstation Camera  (currently around $55)
– two Playstation Move controllers (currently around $35 each)
– Playstation VR Worlds ($40)
If purchased separately, the total cost would be around $565.  Logically, this should be the upper limit of the Launch Bundle so long as the Core is in stock.
In any case, based on user reviews and the difficulty of finding the Launch Bundle in stock, it appears the Playstation VR has at the very least a reasonably successful launch.  We will probably get a better idea in January after the holiday season, when Sony will likely announce sales figures, perhaps at CES (January 5-8, 2017).