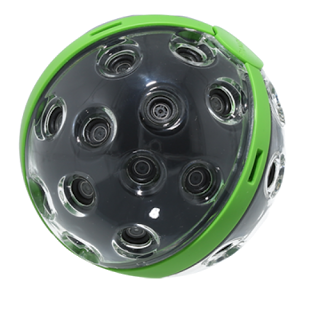 We’ve covered the Panono 360° camera in the past already. It’s a panoramic ball camera that consists of 36 small camera modules. The camera can be thrown into the air, automatically takes 36 pictures simultaneously at the apogee of its flight and is then caught again. The result is stitched in the cloud and has a whopping 108 megapixels, which makes it one of the highest resolution fully spherical cameras.
Panono was launched as part of a crowdfunding campaign on Indiegogo back in January 2014 and raised $1.2 million USD. During the campaign the camera was available for $499 USD.  Panono also raised 1.6 million EUR as a crowd investment  on Companisto.
In July 2015 the company announced that their camera was going into production, howevery they did not feel confident with the camera being thrown (and possibly not caught) as originally envisaged (it can also be triggered via Smartphone app). The first run of the camera was thus called the “Panono Explorer Edition” and due to being an “exclusive early access edition” got a price tag of $1499 USD.
Backers of the crowdfunding campaign had the option of getting one of the explorer edition cameras or waiting for a throwable version of the camera to be released later on.

Fast forward to October 2016. Panono just announced that due to recent improvements (“added features to the camera itself as well as the supporting cloud infrastructure“) the product has matured enough to drop the “Explorer Edition” label. However, the price is not returning to the crowdfunding levels, instead the company is raising it to 2140.81 EUR.

Until October 12th you can still buy the camera for the old price of 1499 EUR using the code YVJYVL at shop.panono.com.


It appears that Panono’s price increase at launch has been successful – their product targets a small niche of 360° professional photographers that need the high image resolution and are willing to pay a premium. The other 360° cameras on the market have lower photo resolutions (and much lower price tags) and can also do video, something the Panono camera can not.

TECHNIQUE: How to remove people or make clones of them in 360 photos
RUMOR: Is this the new Ricoh Theta? Ricoh Theta SC specifications leaked
Comment