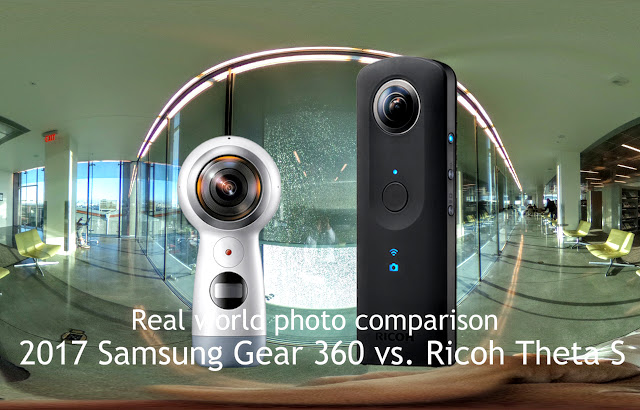 Here are comparison photos between the Ricoh Theta S and the 2017 Samsung Gear 360.

The Ricoh Theta S is currently the most popular 360 camera on the market by a very wide margin (even if you only look at recent sales and not historic sales).  The Ricoh Theta S was released in 2015 but remains one of my favorite 360 cameras for 360 photos.  It has the best manual controls, the best stitching among 360 cameras, and it’s easy to hold and use.  However, it has low resolution videos (1920 x 960).

The 2017 Samsung Gear 360 appears to be aiming squarely for the Theta.  It has a shape that’s easy to hold and use and excellent stitching.  It doesn’t have the Theta’s manual controls but that won’t matter to many casual users.  With high resolution video (4096 x 2048), 2017 Gear 360 could effectively become the “4K Theta” that everyone has been waiting for, at $100 less than the Theta’s MSRP.

On paper, the 2017 Gear 360 has a similar photo resolution to the Theta, but can the 2017 Gear 360 match the Theta’s photo quality?  I will still be putting together the ultimate 360 camera comparison test (with 12 cameras so far) but in the meantime, here are real world comparison shots between these two cameras.

Note that although the photos look like they have the same exposure, the Theta consistently is about 1EV lower in exposure than the Gear 360.  I’ve noticed this in other comparison shots between the Theta and other 360 cameras.  My hypothesis is that the Theta underexposes to avoid blowing highlights then increases the exposure during the processing to normalize the exposure.  But I don’t know this for sure.

In the meantime, what do you think so far?

Photo and video comparison between 2017 Gear 360 and original Gear 360
2017 Gear 360 Hands-on First Impressions: Everything I know so far
Comment