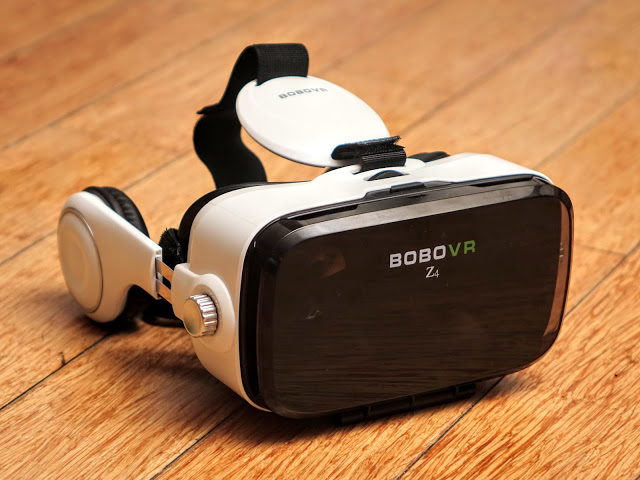 This is a review of the BoboVR Z4 headset for Google Cardboard, renowned as one of the best Cardboard viewers in its class.  How good is it, really?  Is it still relevant now that there are several VR headsets in the market?

INTRODUCTION
Google Cardboard was arguably one of the most significant factors in bringing awareness of virtual reality to consumers.  However, because of its limited tracking capabilities compared to higher-end VR systems such as HTC Vive, Oculus Rift, Playstation VR, or even Samsung Gear VR, it is usually considered as a headset only for casual users and not enthusiasts.  But that may be changing soon.
Google Daydream was released last year, and it showed good quality head tracking was possible with a passive headset (i.e. a headset without its own sensors).  This is because of improvements in smartphone processors that now have more sophisticated sensors.  The cool thing is that the tracking capabilities of the new Daydream-capable processors can also be helpful for Google Cardboard.  Cardboard apps can be readily adapted to take advantage of the new capabilities, which makes headsets such as BoboVR Z4 more relevant now than ever.

WHAT’S IN THE BOX
I received a review copy of the BoboVR Z4 from GearBest, an electronics store that began in Hong Kong but has now expanded to include distribution centers in the US, UK, Spain, Russia, and China, enabling them to deliver products much more quickly.
The BoboVR Z4 includes the headset, and in some kits, a joystick controller that looks very similar to the nunchuck for the Nintendo Wii. 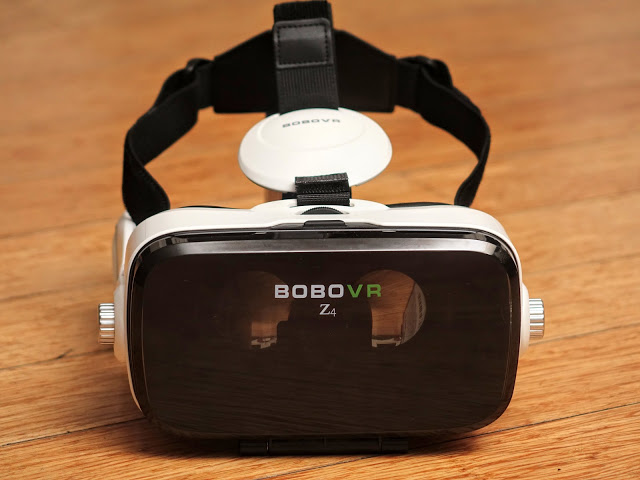 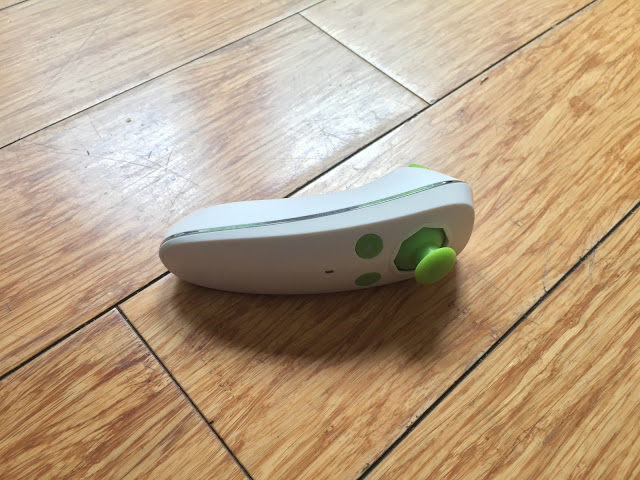 The BoboVR Z4 headset is large but lighter than it looks.  Here is how it compares in size to a couple of generic Google Cardboard headsets: 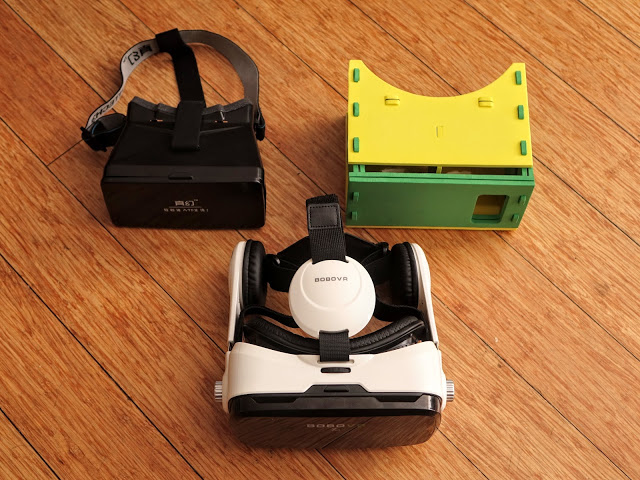 For reference, here is how it compares in size to some VR headsets (top: Playstation VR and Oculus Rift; bottom: Samsung Gear VR 2016 and the BoboVR Z4): 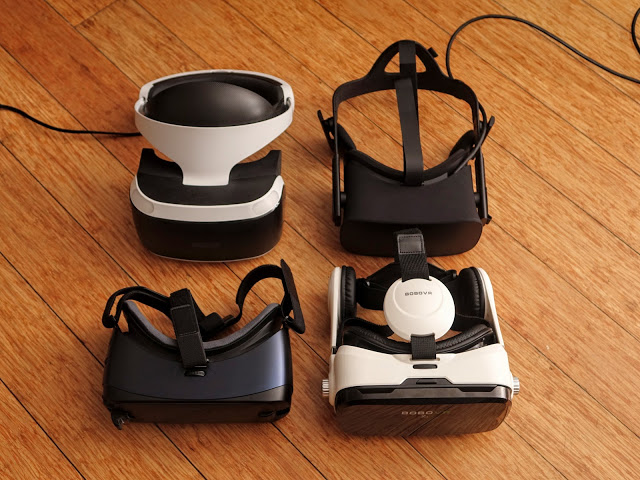 Although the Z4 is larger than many Cardboard viewers, it is not as deep.  This is because it uses higher quality and more powerful lenses that have a shorter focal distance.  It has a similar depth as the Samsung Gear VR.

1.  Large lens and larger field of view.
One of the first things you’ll notice about the BoboVR are its large lenses.  The lenses dwarf the lenses of entry-level Cardboard viewers, and are larger than those of the Gear VR, or even the 2016 version of the Gear VR. 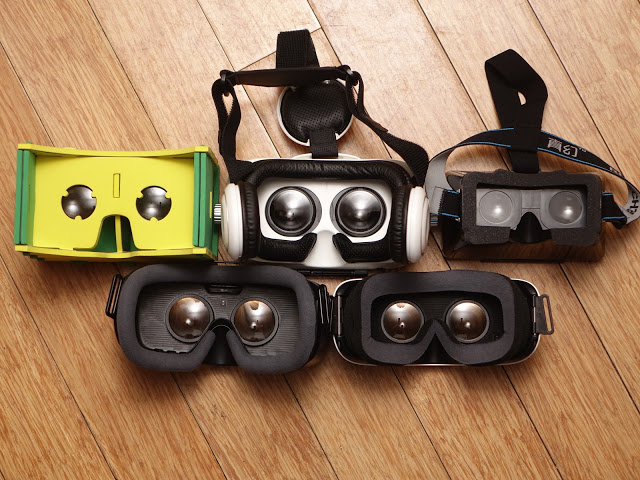 Because the Z4’s lenses are so large, BoboVR claims a field of view of 120 degrees.  It’s hard to measure the field of view, but the Bobo VR’s lenses are not larger than those of the Rift or Playstation VR.  The Rift supposedly has a 120 degree FOV diagonally, and the PSVR is claimed to have 100 degrees FOV (not sure if diagonal or horizontal).  I would therefore take the Z4’s 120 degree FOV with a grain of salt.

In any case, regardless of the actual FOV number, the Z4 has a very wide field of view — it’s so wide that with my Samsung S6 on the Z4, I can see the home button while wearing the headset.  It goes without saying that the actual viewable image size will see will depend on your phone’s screen size.  But the Z4’s large lenses will enable you to take advantage of larger displays.

2.  Integrated adjustable headphones.
The BoboVR Z4 has integrated headphones which can adjust forward or backward and has metal arms that can flex sideways. 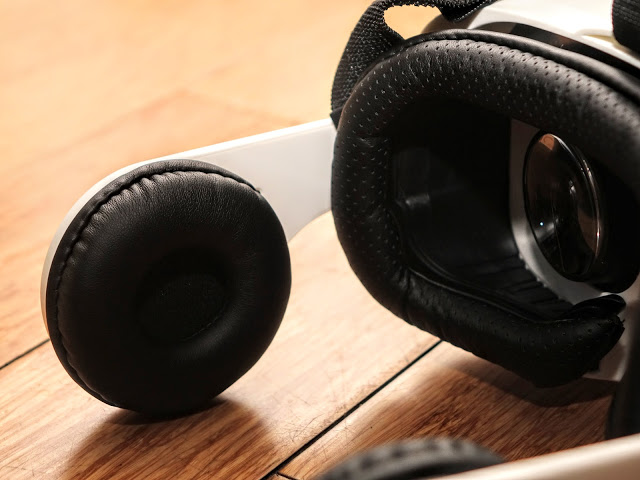 The Z4 connects to your phone with a stereo plug on the Z4’s left side.  The plug has a receptacle for holding it when the plug is not in use. 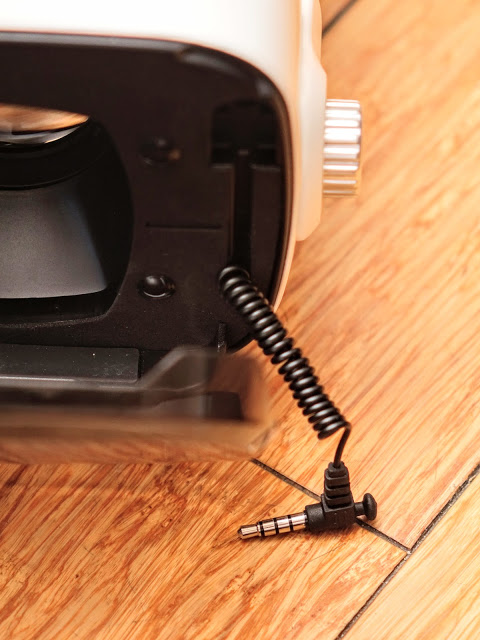 As for audio quality, in my opinion, the headphones sound decent.  Not too much treble or bass.  They sound neutral.  There was no buzzing at moderate volumes.

4. Volume control with selection button
On the left side of the bottom of the headset, there is a volume rocker switch.  The switch works just like the controls on Apple Earpods, with + and – for volume, but in addition you can press the switch in, which functions like the selection button on Earpod controls.  If you’re using an iPhone, you can hold down the rocker switch to use Siri.

5.  Cardboard trigger / button.
Some Cardboard apps require pressing a trigger.  The Z4’s button is on the bottom right side of the headset, conveniently placed for your thumbs.  It does require more effort to press than I was expecting but it works, so long as the phone is fully inserted in the Z4.  I tested it on the YouTube app for Cardboard with my iPhone 6 and with my Samsung S6 and it worked flawlessly.

6. Focus adjustment
The Z4 has a knob to adjust focus by moving the phone closer to or farther from the lens (it doesn’t change the distance from the lens to your eyes).  The adjustment affects both eyes (it’s not a separate adjustment per eye). 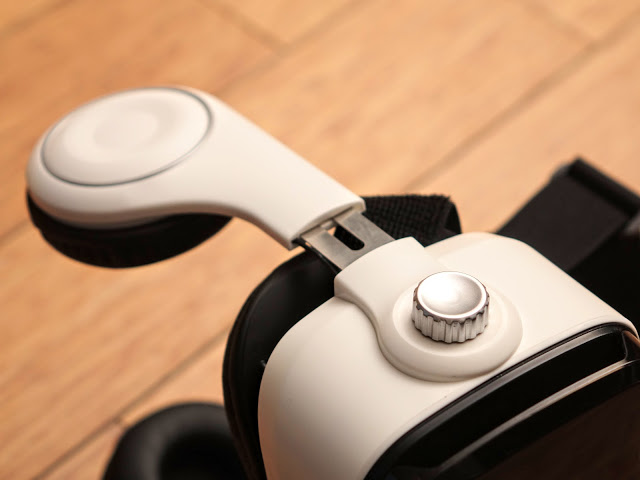 6. IPD adjustment
The Z4 can adjust the interpupillary distance (IPD) using a wheel on top of the Z4. 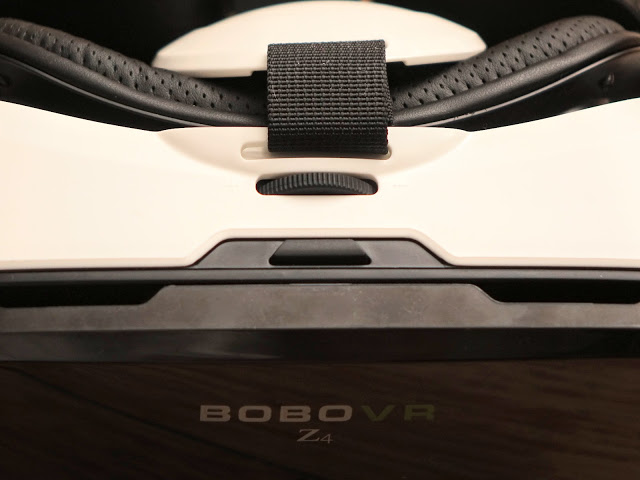 7.  Translucent cover
The front cover is translucent, which enables you to continue using your phone’s camera.  In theory, this should allow pseudo-AR apps (like Pokemon Go) for Cardboard.  However, I’m not aware of any such apps yet. 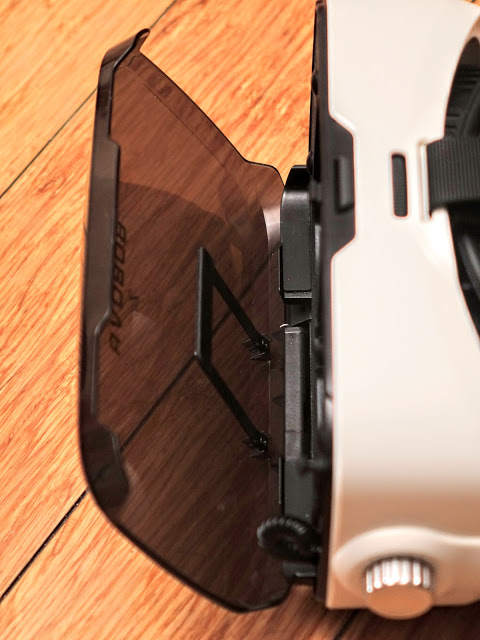 9.  Anti-fog vents.
The Z4 has dozens of vents around the face mask area to allow air to flow through and reduce lens fogging. 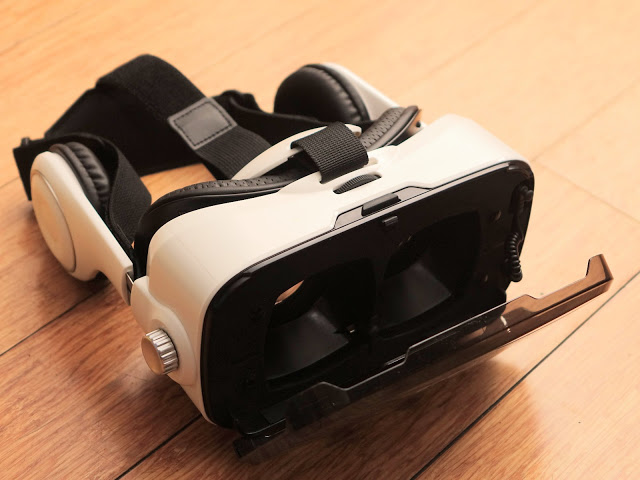 Inserting the Phone
The Z4 has a button above it to pop open its spring-loaded front cover. 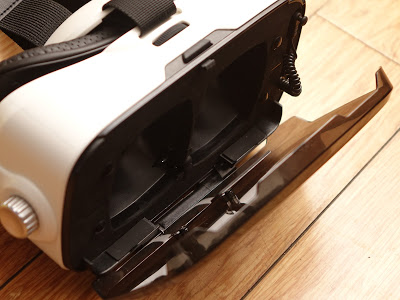 The Z4 can accomodate phones with a screen size between 4 to 6 inches.  I tried it with an iPhone SE, iPhone 6, and Samsung S6.  They all fit.  The SE was so small (and the Z4’s view is so large) that when viewing the SE, I could see almost the entire width of the phone (not just the screen).  On the iPhone SE and 6, there will be quite a bit of space above the phone.  When viewing the image, you’ll see a small gap above the iPhone 6 and a more noticeable gap on the SE.  With the Samsung S6, I don’t see any gap. 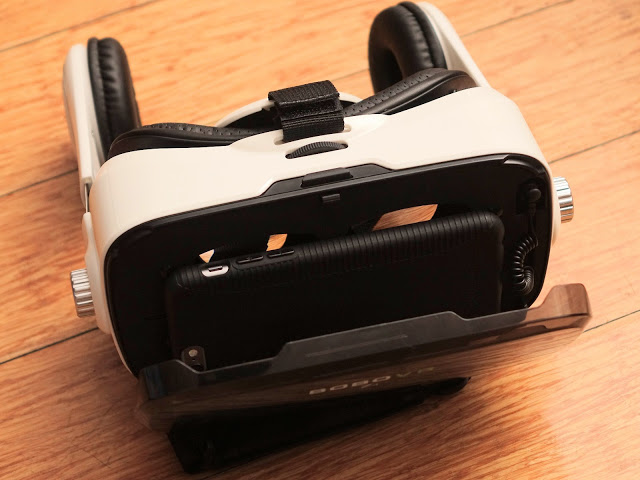 Because the Z4’s receptacle is quite large, it can accommodate some thinner cases like the Zugu case (see above).  It also just barely fit my S6 with the Otterbox Defender case (with the outer rubber cover removed). 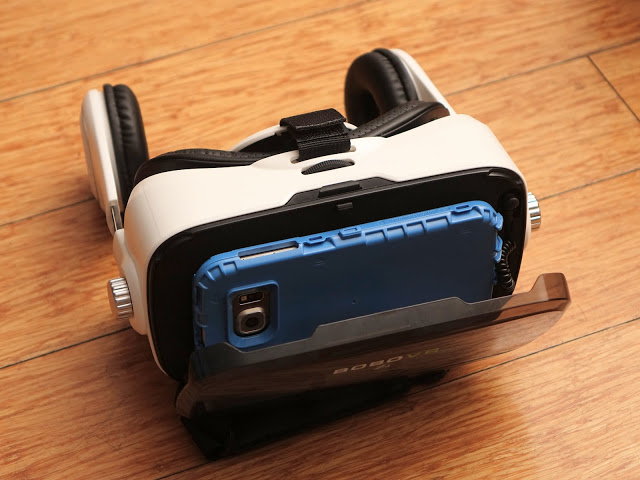 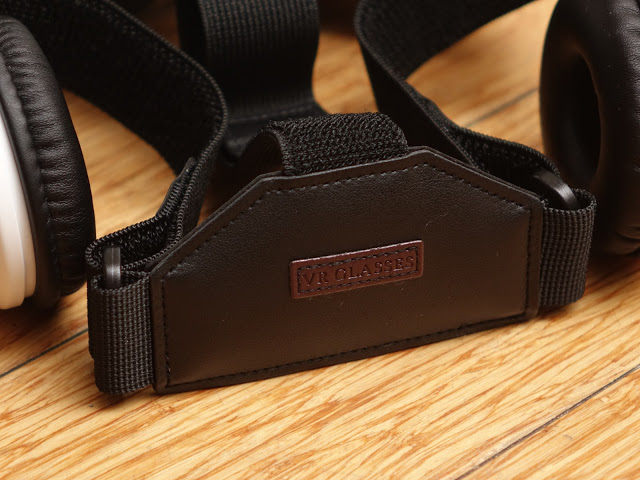 As I mentioned above, the Z4 has many adjustments.  The headstrap, the adjustable IPD, the focus adjustment, and the adjustable headphones help it to fit most people.  However, note that the distance from the lens to the eye cannot be adjusted.  I tried wearing thin frameless eyeglasses and they can kind of fit but the eyeglasses will be pressed onto your face.

QR Code
Before you use the BoboVR Z4 (or any Cardboard headset), you should set up your Cardboard app for your specific headset to minimize the distortion.  Almost all Cardboard apps have a setting where you can specify your headset by scanning a QR code.  This tells the app what kind of lens your viewer is using, how far away it is from your eyes, etc. and that information is used to warp the image precisely so that when you view, the distortion is canceled out by your headset’s lenses.

I tried the QR code printed on the Z4’s instructions and it wasn’t very good.  There was still quite a bit of distortion.  I searched on Google for other QR codes for the Z4.  The best one I found was this one: 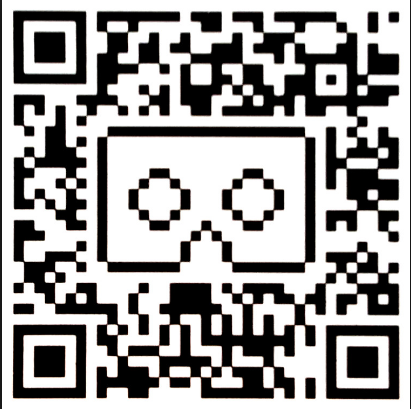 It’s not perfect, but it’s the best one I found for my specific adjustments (my IPD, my phone, etc.).  You can look for other QR codes here.

As I mentioned, the headset can be adjusted in many ways to customize the fit to your head.  Once adjusted, I found it comfortable.  The only complaint I have is that the face foam (which is memory foam btw) pinches my nose slightly.  I didn’t see a way of adjusting the foam to avoid that.

The weight is not too heavy, and it doesn’t feel too front-heavy even with my Samsung S6 on it.  I haven’t tried a larger phone.

I haven’t experienced fogging on it yet, although I haven’t used it for prolonged periods either (just some YouTube videos and a few Cardboard games).

The tracking performance is of course entirely dependent on your phone and its sensor.  I found the iPhone 6 to have better tracking that the Samsung S6 (in Cardboard mode as opposed to Gear VR mode).  But please understand that neither can hold a candle to the Samsung Gear VR’s tracking (due to asynchronous timewarp, low-latency display, and other technologies borrowed from Oculus Rift).   I haven’t tried it with a Google Daydream-ready phone yet, nor have I tried Cardboard apps updated for Daydream.  I suspect the performance for those would be dramatically better and would be similar to those of the Gear VR, but I can’t confirm that until I actually try it.

CONCLUSION
The BoboVR Z4 has a very good reputation, and in my opinion, that reputation is well deserved.  It has many features and advantages, such as those listed above.  The biggest ones for me are the large field of view and the good quality integrated headphones.  I also really like that I don’t have to remove my smartphone armor to use it on the Z4.

There were a few disadvantages, such as the need to look for a QR code, and the slight pinching on my nose.  It also seems that the face foam can’t be removed or washed.  I also wish the headphone jack was on the right side because some apps assume that the phone is positioned left side down rather than right side down.

However, those small disadvantages are easily outweighed by the many advantages and features.  If you’re looking for a headset for yourself, or to use to show your 360 photos and videos to your clients on a Cardboard-compatible app, the BoboVR Z4 would be a very good choice and an excellent value among Cardboard viewers.

If you would like to buy the BoboVR Z4, please consider buying it from GearBest, who sent me this review copy.  They have very good prices for the items that they carry — generally lower than most other retailers.  They’re based in Hong Kong but they have warehouses in the US, UK, Spain, Russia, and China, so they can send items faster to you. They also created an affiliate link for 360 Rumors, which helps support 360 Rumors at no additional cost to you so I can do more tests and reviews.  Thank you very much!