This is a review of the Monoshot, a monopod with removable tripod legs.  This review is focused on its usage with a 360-degree camera.

Selfie sticks have been derided as an accessory for amateurs and narcissists.  However, for 360-degree cameras, they are an important tool.  Among other things, using a selfie stick or monopod allows you to avoid looking like you have giant thumbs or giant hands.  They also help you take the shot from a higher vantage point.  Selfie sticks that have tripod legs are even more useful, because they can take the shot while the 360 photographer moves out of the way.
One issue with conventional selfie stick tripods is that they are not very stable.  This can result your camera swaying and getting the shot blurred, or worse, the camera falling.


INTRODUCING THE MONOSHOT
​The Monoshot is a selfie stick / monopod with removable tripod legs.  It has several key features that are useful to 360-degree photographers:
– The legs are extendable, which can increase the base, and thus the stability.
– The angle of the legs can be made wider (as in the shot above), further increasing the base and the stability.
– Has a spike attachment for soft surfaces such as grass or sand.
– Longer / taller than most selfie stick tripods (extends to 5.9 feet).
– compared to traditional tripods, the legs are farther away from the camera, and thus occupy a smaller portion of the frame.
– The legs are detachable so that you can use the selfie stick / monopod by itself if you don’t need to use it as a tripod.
– The detachable legs can be used with your camera as a mini tripod (see below).
​
Here are the claimed dimensions of the monoshot:
Weight: 1.9 lbs /.9 kilos
Folded Length: 19.5 inches
Expanded Length: 5.9 feet
WHAT’S IN THE BOX 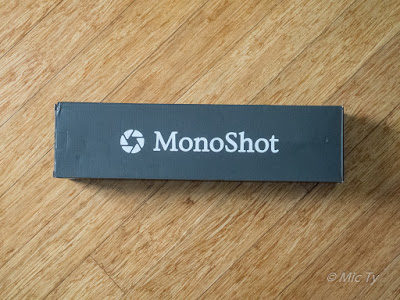 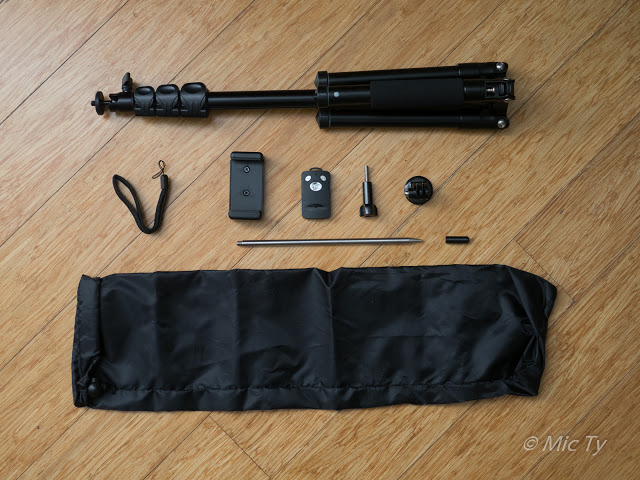 I ordered the Monoshot and received it in only a few days.  It arrived in a neatly packed box.  It included the following:

– a metal spike with rubber cover

– a drawstring bag for carrying the Monoshot

The Monoshot felt much lighter than a similarly-sized generic monopod that I had gotten from Amazon, yet felt just as sturdy.  When collapsed, the Monoshot is only about 16 inches, or 17 inches with the legs attached. 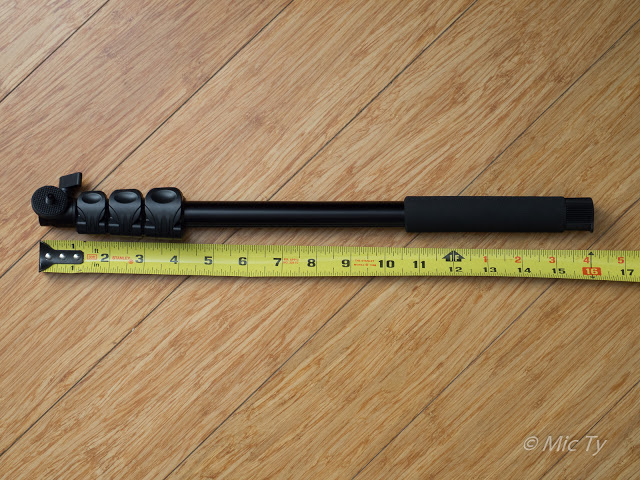 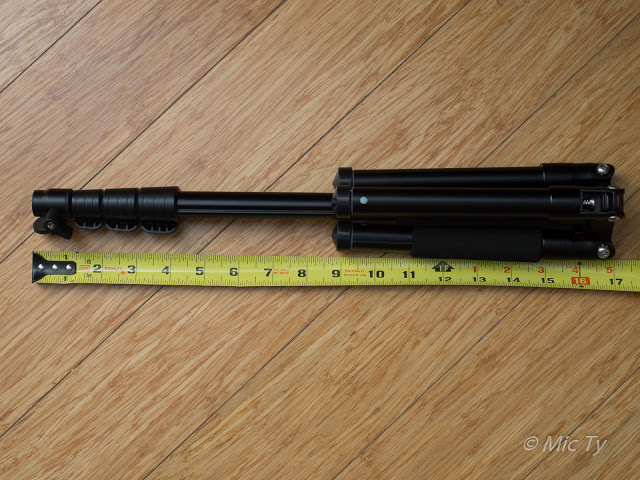 I found that mine was noticeably shorter than advertised, around 5 feet 3 inches in height. 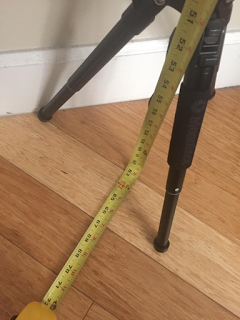 When I brought this to the attention of Monoshot, co-founder Zack Cram said that no one else had made a complaint about the height, and they thought that the supplier might have substituted the parts of my unit.  To Monoshot’s credit, Zack offered a return for a full refund, which I declined.  (The website still shows a height of 5.9 feet.)
The Monoshot has four sections which can be extended by flipping three locking levers.  I prefer this type of lock compared to the twist lock because levers are quicker and easier for me to use, and you can tell immediately when they are unlocked or locked.

The Monoshot has a built-in mini ballhead with 1/4-20 screw.  It works acceptably, although I would have preferred it to be removable.
At the bottom of the Monoshot is a 1/4-20 tripod attachment.  You can use it for the removable legs or for the included spike. 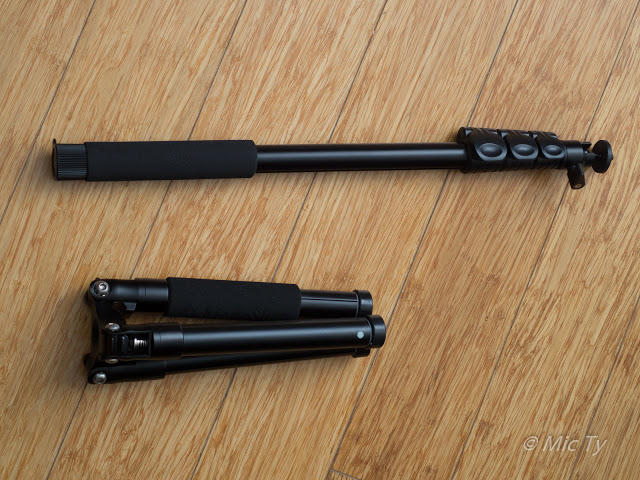 The removable legs attach to bottom of the monoshot.  One of the legs has a foam padding with the Monoshot logo, which can help make it more comfortable to grip when using the Monoshot as a selfie stick.  The legs can be opened in 3 positions (4 positions if you include full vertical as when it is being used as a selfie stick).  To close the legs, you flip a small lever near each joint.   Each leg can also be extended.  To extend a leg, you twist it to unlock it, pull it to the desired length, and twist it to lock it again.  The legs have a rubber cover on their feet for better friction.
For soft surfaces such as sand or grass, you can use the included spike.  Unlike the spike shown in the video, the included spike does not have a footrest.  Zack explained that the dropped the footrest in order to upgrade the ballhead to a metal one (as opposed to the plastic one in the video).  Don’t forget to leave the spike at home when you’re traveling on an airplane.
ACTUAL USE
In actual use, the Monoshot works pretty much as advertised.  The sections extend smoothly, and it is reasonably stiff, although of course not as rigid as a heavy duty tripod.  For a lightweight 360-degree camera such as the Theta or Samsung Gear 360, it has adequate stiffness.
As a selfie-stick
The Monoshot works well as a selfie stick because of its light weight.  Compared to using a selfie stick, it is longer and more rigid.  I also find the wrist strap useful.  On the other hand, it is less compact than a typical selfie stick – about the same as a typical tripod.
As a tripod
I like the fact that it’s very quick to deploy the Monoshot.  I just attach my camera to the ballhead, flip the legs to the position I want to use, flip the locking levers, use gravity to extend the Monoshot, lock the levers, then just put the Monoshot down.
Putting the Monoshot away would be almost as easy, except that when closing the legs, one of the levers doesn’t release correctly, and I have to push the lever down before pulling the lever back.
As a tabletop tripod
The Monoshot legs can be used as a small tripod.  To be honest, I rarely used it for this purpose because I would need a separate ballhead (or else I won’t be able to adjust the camera angle precisely).  I prefer to use the Tiltpod or my iKross selfie stick for tabletop shots.  That’s why I just leave the legs extended (they can be folded even when extended).

Here are some sample photos and videos taken with the Monoshot, showing how much space the legs occupy in the frame.
As a selfie stick (fully extended):

BTW use it on sand at your own risk – it can be a hassle to remove the sand!

SUMMARY
The monoshot is a very useful monopod/tripod for 360-degree cameras.  It is lightweight and relatively quick to use.  The build quality could be improved but because it is more versatile than my Manfrotto Nano lightstand and more stable than my iKross selfie-stick tripod, the Monoshot is still my go-to monopod/tripod when shooting outdoors.