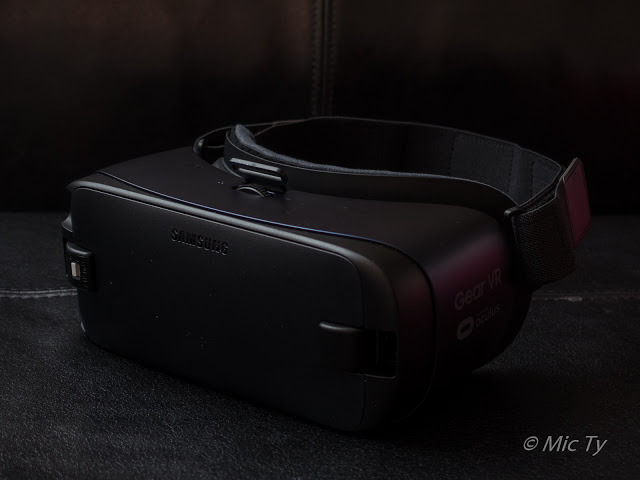 This is a review of the 2016 version of the Samsung Gear VR, the fourth version of Samsung’s popular VR headset.  In this review, I compare it to the 2nd version (Innovator Edition for S6) and 3rd version (Consumer Edition).

Even after getting the HTC Vive, I still use my Samsung Gear VR for viewing 360 photos, videos, and for casual, seated games.  When I learned about the new Gear VR, I was pleased with the improvements.  However, I was a little disappointed that they didn’t confirm it as being Google Daydream compatible.Nonetheless, I decided to get it because of the new Type C connection and the USB OTG port (see below). 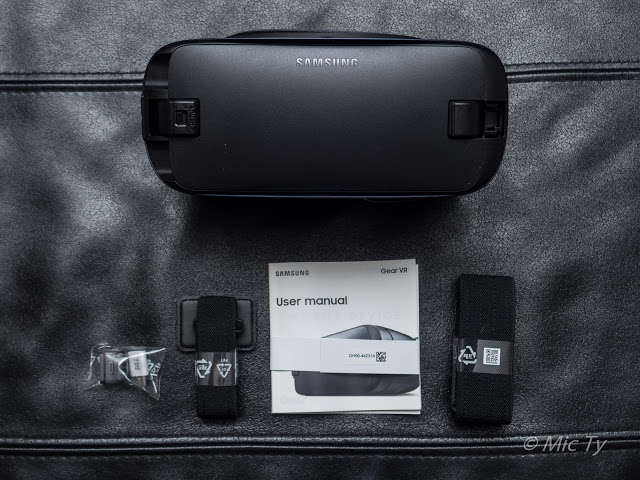 SIMILARITIES AND DIFFERENCES
There are a number of small but notable differences between the 2016 Gear VR, the Consumer Edition, and the Innovator Edition for the S6:1.  USB Type C connection and backwards compatibility with Micro USB.  The 2016 Gear VR has a Type C phone connection used in the Galaxy Note 7 and probably to be used in the upcoming Galaxy S8.  At the same time, the 2016 Gear VR includes a Micro USB phone connector so that it remains backwards-compatible with S6 and newer Galaxy phones.Switching connectors is pretty easy.  You just slide a switch on the connector to unlock it.  Then you slide/lift the connector upward to remove it.  Installing the other connector is just the reverse process.You won’t be confused as to which connector is currently installed because the Type C connector has a black switch while the Micro USB has a white lock switch.

I believe the new Type C connector is the most practical reason to upgrade to a 2016 Gear VR.  While the 2016 Gear VR is compatible with older phones, newer phones with Type C connectors won’t be able to use any of the older Gear VRs.  Current Gear VRs therefore have their days numbered.

2. USB OTG port with adapter
Previous Gear VRs had a pass-through USB port to enable you to plug in a compatible adapter to avoid draining your phone’s battery.  The 2016 Gear VR has a USB Type C OTG port that can not only charge but can also transmit data.  Version 4.2 of the Samsung Internet app allows the 2016 Gear VR to view videos from an external device such as a USB drive, which is useful for conserving the limited space of a phone.

For those planning to use the Gear VR for Riftcat or to play PC games in VR, the OTG port may also offer a faster and more reliable connection than Wi-Fi (assuming it’s supported by the software you’re using).

There’s an included OTG to Micro USB adapter, which is also white, like the phone connector switch for Micro USB.

Please note I haven’t been able to test this feature.  I’m not yet sure if you need a phone with a Type C connector in order to be able to use the OTG port for data transfer.  I’ll update this after I test it further. Update: another user has confirmed that you can view media from the USB drive.  However, please note he was using a Note 7.

Update: I’ve confirmed that yes, you can view media on a USB drive even with an older phone that uses Micro USB.  See here.

3. Larger view.
Samsung said that the 2016 Gear VR increases the field of view from around 96 degrees to around 101 degrees.  I only have an S6 (not a Note 5 or 7, or one of the Edge phones), so I wasn’t sure if I could take advantage of the wider field of view, or if I would even notice the seemingly small difference.

However, when I first tried the 2016 Gear VR, I noticed the difference right away. It’s not a HUGE difference, but it’s easily noticeable to me.  I then tried to figure out how to quantify the difference.  I tested it by looking at a specific area of the main menu then noting the objects that were visible at the peripheries.  With this test, I found that the field of view seems to be about the same.  If anything, the lens on my Innovator Edition seems to be clearer at the extreme edges (with less fringing) compared to the 2016 Gear VR.
I then did another test.  While wearing the Gear VR, I positioned my hands with palms inward to the approximate ‘edge’ of my field of view.  On the Innovator Edition, the distance between my palms was about 7 inches.  On the 2016 Gear VR, the distance between my palms was about 8 inches — a significant difference indeed.
In other words, it’s appears that the field of view hasn’t increased. Rather, what has increased is the magnification.  It’s like getting a bigger TV — you won’t see more, but you’ll see it larger.
This difference is explained by the noticeably larger lenses in the 2016 Gear VR.  The older Gear VR (both Innovator and Consumer) have round lenses.  On the 2016 Gear VR, you can see that the lenses are so large that the corners have to be cut around the nose area, similar to the lens design of the HTC Vive.

The 2016 Gear VR has a facial foam that is narrower and seems thinner, but is also denser.  It has a rounded shape, and has a very soft, fleece-like outer material.  Because it is a little thinner, the lens is a little closer to your eyes, which I think is one of the reasons the view looks larger.

5.  Less reflective.  The Consumer Edition had a white interior.  In bright scenes, you could see some reflection from the light.  The 2016 Gear VR is like the Innovator Edition in that they both have a black interior, which is less reflective. 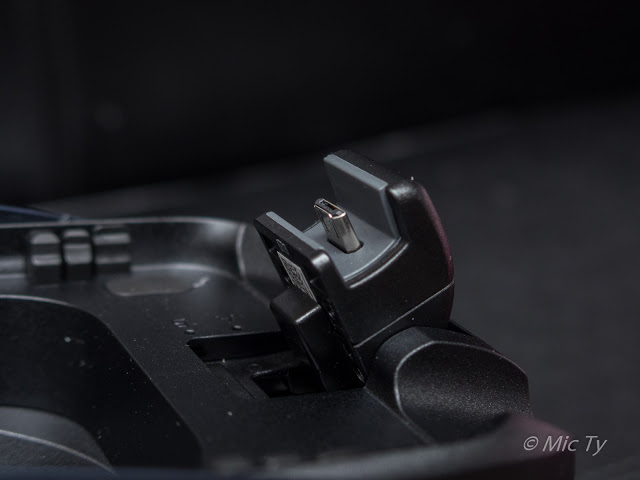 7.  New home button.  On previous versions, going back to the Home screen (to exit an app) required more steps.  You needed to hold down the back button to bring up the universal menu, then choose Home.  The 2016 has a new dedicated Home button.  While wearing the 2016 Gear VR, the new Home button is easily differentiated from the Back button not just by its position but also because it is a little recessed, while the Back button is not. 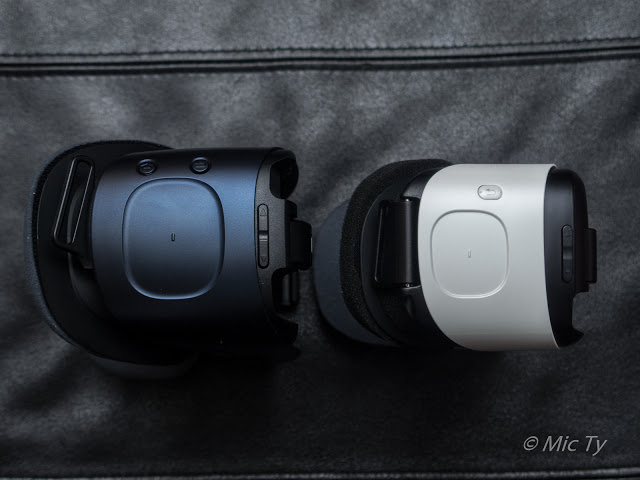 IS IT WORTH IT?

If you don’t already have a Gear VR, you may want to wait and see.  Although the Gear VR is still the best mobile VR experience at the moment, Google Daydream is due “Fall 2016.”  Daydream appears to be similar to the Gear VR but is supported by several manufacturers (including Samsung), so it may overtake Gear VR despite the Gear VR’s 1 million-strong active users.  There’s also the slight possibility that the 2016 Gear VR is actually Daydream-compatible, although Samsung has said nothing about that.But perhaps you don’t want to wait and see what Daydream offers.  Or maybe you already know you won’t abandon Gear VR regardless of Daydream (as in my case, due to the many apps I already have for Gear VR).  In that case, then the 2016 Gear VR has several notable improvements over the Consumer Edition, and there’s no question the 2016 is the best version of the Gear VR to date.  Besides being future proof, the larger view and the new face foam are improvements that will make a difference every time you use the Gear VR.  If you already have a Gear VR, you just need to decide whether the incremental cost (after selling your old Gear VR) is worth these benefits.  For me, because I use the Gear VR frequently, the answer is yes.

I preordered the Gear VR directly from Samsung the day after it was announced.  Ironically, I didn’t receive my order (it was backordered) and instead I had to reorder it from Amazon.  Fortunately, Amazon currently has it in stock for the same $99 price with FREE same-day shipping (you’ll receive it the same day you ordered it).  If you would like to purchase the 2016 Gear VR, please consider purchasing through the Amazon link above, which would be a welcome way of supporting 360 Rumors at no cost to you, so I can do more tests and reviews.  Thank you very much!