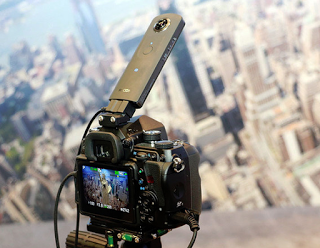 Ricoh has developed a method of integrating 360 photos with non-360 photos and videos, resulting in 360 photos that can be viewed closely in remarkable detail.

360 cameras are great for capturing everything around them but they have limited resolution.  First, larger sensors require larger lenses, and to keep a 360 camera’s ultrawide angle fisheye lenses to a practical size, the sensors in 360 consumer cameras is typically limited to 1/2.3 inch (the size of a point-and-shoot camera sensor).  Second, when compared to non-360 cameras of the same sensor size, the 360 camera captures a much wider field of view.  Thus, while 360 cameras are able to capture a wider field of view, its images generally have lower resolution and image quality when viewed at the same size and field of view as the image from a non-360 camera (as when viewing on a VR headset).

Ricoh has developed a system that combines the advantages of a 360 camera’s field of view with a non-360 camera’s image quality.  As first reported by Phile-Web, Ricoh’s system uses a 360 camera such as the Ricoh Theta S mounted on a conventional camera.  As the 360 camera takes a spherical photo, the system uses high resolution photos or videos from a conventional camera and embeds them into the 360 photo.  The result is a 360 photo that has areas with high resolution photos or videos that you can inspect closely

Here is a video by Bob Yen showing the hybrid system:


Ricoh’s system analyzes the 360 photo and the non-360 photos and videos to align them and merge them.  The system is only a concept demo for now and is not [yet] commercially available.  Would you want to be able to integrate images from your 360 camera and conventional camera?  Let Ricoh (and other manufacturers) know in the comments below!

Here is the original article (in Japanese) from PhileWeb and here is a related article from Theta Unofficial Guides.  Thank you very much to M.S. from Ricoh for bringing this to my attention!