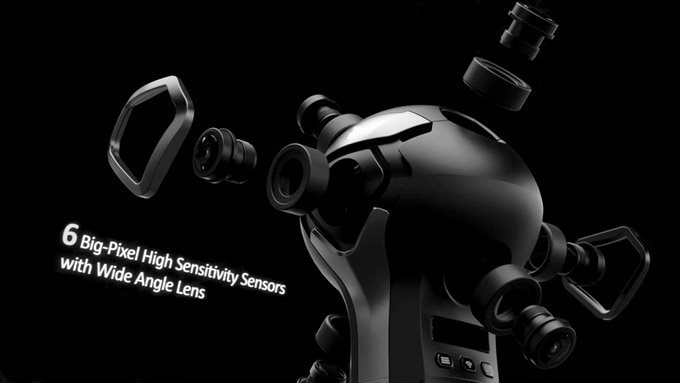 Rogy is a 5.7K 360 camera that just launched on Kickstarter.  Here’s why it could have more detail than other 360 cameras of the same nominal resolution. May 16, 2019 update: new sample video.

Rogy is a 5.7K 360 camera that can also take 8K photos and has 4K realtime stitching. It has six lenses and was made in collaboration with Cupola360.  According to Rogy’s founder, the name Rogy stands for “Return to Glory.”  Here is a video that shows Rogy in use:

With several other 5.7K 360 cameras in the market, the Rogy is not revolutionary in its specifications.  However, it MAY have more detail than other 5.7K 360 cameras.  That is because the Rogy has six lenses and each lens has a smaller 120-degree field of view.  This means that in theory it can have more pixels per degree than an equivalent sensor that uses a fisheye lens with a 180 degree or greater field of view.

Of course, we’ll have to wait and see the actual results to see if it is indeed better than other 5.7K 360 cameras.  Rogy said they’ll provide actual samples in the next few weeks.  Meanwhile, here is a sample video, which is NOT at full resolution but shows the stitching quality.

Rogy’s plan is to retail in Q4 2019, but Rogy hasn’t said what the retail price will be.  Meanwhile, you can back them on Kickstarter for planned release in September 2019, with early bird pricing at $499.  Note that Rogy is made in Taiwan, which is not subject to the same tariff as China.

Please note that crowdfunding is not like preordering.  Products can often be late, and sometimes are not released at all, and backers have little or no remedy.

What do you think of Rogy so far?  Let me know in the comments!