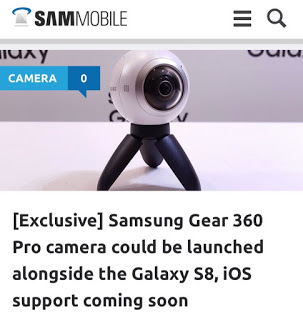 There will be a new Samsung Gear 360 Pro camera that will be launched with the Galaxy S8, and Samsung may add iOS support, according to Sammobile.

Sammobile says Samsung is working on a new version of the Gear 360 camera, called the Gear 360 Pro that may be announced with the Galaxy S8.  Sammobile has no information on the new features, but believes that it could have better image quality.  I hope they fix #blurgate.

Sammobile also reports that Samsung is planning to add iOS support for the Gear 360 Manager app, making the Samsung Gear 360 compatible with iPhones.  No word on whether support will be added for other Android phones.

The most in-depth review of the LG 360 Cam R105: affordable and compact 360 camera with a unique feature
Oculus Guardian: Is Oculus Rift shifting toward room-scale VR?
Comment