The highly anticipated Oculus Touch for the Oculus Rift may be coming as early as September. 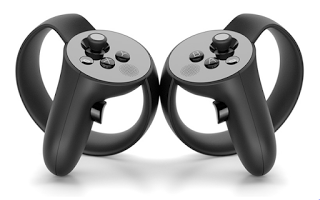 The Touch is highly anticipated not only because it adds motion controls for greater immersiveness, but also because it includes an additional sensor, which can add room scale VR capability to the Rift (with just one sensor, it’s possible but more difficult to do room scale due to occlusion).

Oculus promised the Touch would be available in the second half of 2016.  Now it appears that window is being narrowed and the Touch may be available in September.  At one Best Buy store, Mike Cane found a mockup display of the Oculus Touch together with the Rift, indicating a release “around September.”

@360rumorsblog Yes, with a sign saying they were coming. Showed a pair.

I hope that it does come September or sooner, and at a reasonable price.

For more information on the Oculus Touch, check out the official page here.  Thanks again to Mike Cane for sharing this info!