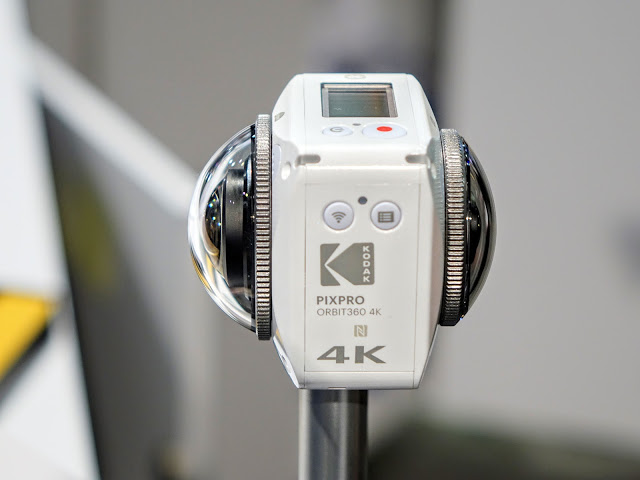 The 360 photo was posted by an employee of Kodak PIXPRO (who shall remain anonymous).  It was a casual photo taken at Kodak PIXPRO’s offices.

It was a fully spherical 360 photo and here is the nadir: 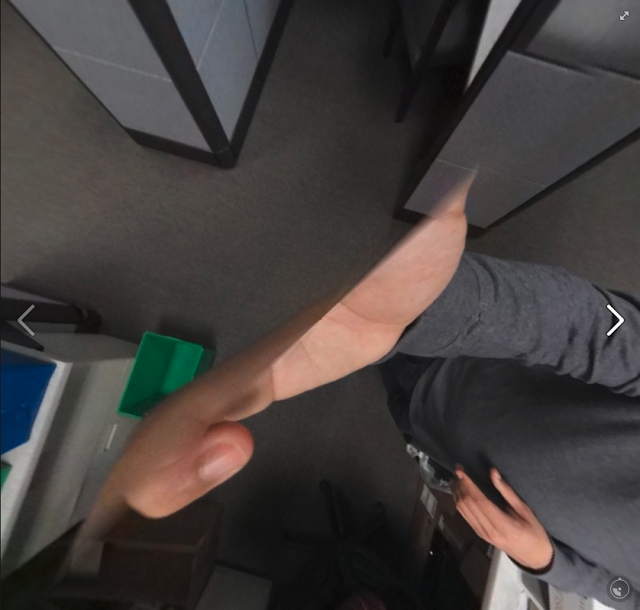 The nadir shows a distance between the lenses that is impossible for the Kodak SP360 4k Dual Pro.  So there are two possibilities: either the photographer was using a 360 camera such as the Samsung Gear 360 or Nikon Keymission 360, or he was using the Kodak PIXPRO Orbit360, Kodak’s only other spherical 360 camera.

I suppose it’s possible that a Kodak PIXPRO employee would post a 360 photo with a competing camera for research purposes, but I think it is more likely that the photo is from the Orbit360.

Next, if you look at the fluorescent lights, there’s practically no trace of chromatic aberration or purple fringing, in contrast to let’s say the Ricoh Theta S.  The decrease in sharpness toward the stitch also appears to be modest.

There is a little bit of glare on the left side of the image.  This is not unusual and was also a characteristic of the Kodak PIXPRO SP360 4k.

I am also curious about how the Orbit360’s lenses compare to each other.  The Orbit360 has two different lenses.  Its first lens is identical to that of the Kodak PIXPRO SP360 4k, which has among the sharpest lenses I’ve seen for consumer 360 cameras.  The second lens is a new design that has a smaller field of view.

I compared the front and rear of the photo to see if one side was sharper than the other.

To me, the front appears a little sharper.  It also appears that the front side is less noisy than the rear which appears to have less illumination.  It could mean that the difference in sharpness may be due to camera shake, or higher noise reduction to offset the noise due to the darker ambient lighting.

How about you?  Do you think this is a photo from the Orbit360, and if so, what do you think of the image quality?