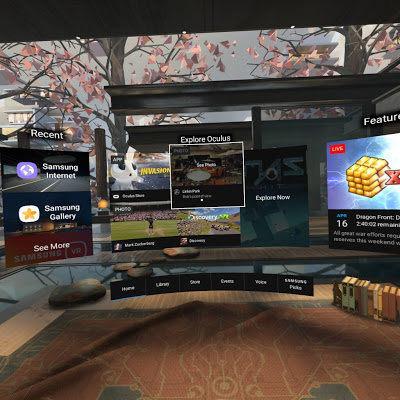 Over the last couple of weeks, Oculus has been rolling out an update to the Gear VR Home that doubles the effective resolution on the home screen.  My Gear VR finally got it, and it looks amazing!

Here’s what the new home screen looks like on the Gear VR:

New Samsung Gear VR home with Cylindrical Timewarp Layers from Mic Ty on Vimeo.Besides the new interface, the new home screen uses a new technique called Cylindrical Timewarp Layers that projects the image more efficiently for the shape of the Gear VR’s lens making it appear much more detailed.  Here’s John Carmack’s explanation.  In an interview with UploadVR, Oculus’ mobile product head Max Cohen claimed it had double the effective resolution.  John Carmack didn’t say that but it did look immediately noticeable to me.

BTW, one of the features added not too long ago is live streaming, which allows you to stream what you’re viewing or playing to Facebook:

To use this feature, hold down the menu button, select your profile, and you should see live streaming as an option.  (Note: some apps don’t allow live streaming.)

VRLA: Holocap is an affordable realtime holographic capture system for VR and AR
You can take 360 photos within this VR game with a virtual Ricoh Theta!
Comment