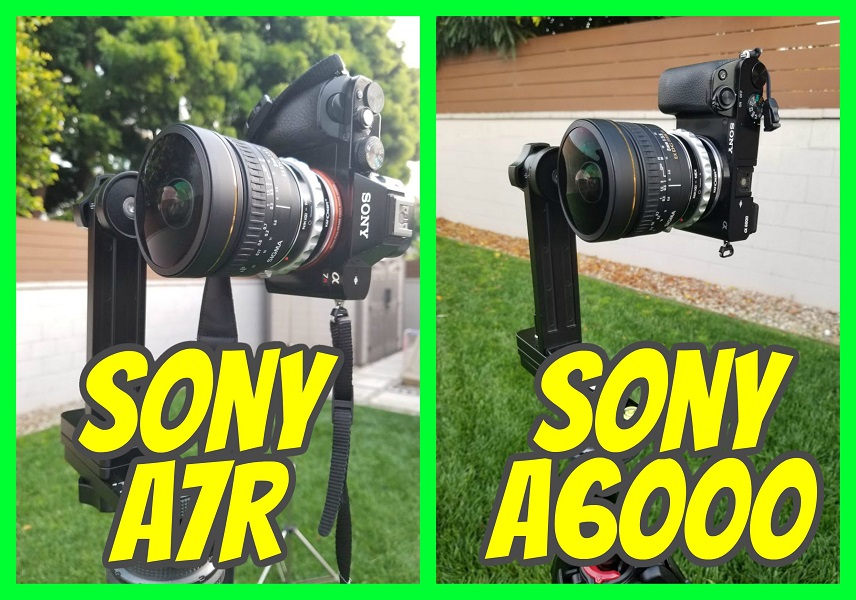 The Sony a6000 is a 24-megapixel mirrorless camera with an APS-C size sensor.  The a7R is a full frame camera with a 36-megapixel sensor.   I took a 360 photo with each of the cameras using a popular lens for 360 photos, the Sigma 8mm f/3.5 (using a Nikon to E-mount adapter).  In both cases, I used the Nodal Ninja 3 panohead (tutorial here), taking 4 HDR shots (3-shot bracket each) in a single row.  In each case, it took less than a minute to take the photo.  I stitched both panoramas on PTGui 11.

HOW COULD THIS HAPPEN?

This is not a trick, and no I did not mix up the files. The Sony a6000 photo really is more detailed. The reason is because of the lens I used.  But didn’t I use the same lens?  Indeed I did, and that’s actually the reason for the discrepancy.

On the Sony a7R, the Sigma 8mm is a circular fisheye, while on the Sony a6000, the same Sigma 8mm is a cropped / partial circular fisheye.  For a 360 panorama, this works out to the a6000’s advantage because the Sigma 8mm uses a much larger portion of the a6000’s APS-C size sensor than on the full frame sensor of the a7R.  At the same time, because the Sigma still has a 180-degree field of view on the long edge of the sensor, it is still possible to capture a fully spherical 360 photo within a single row, with just 4 shots.

The point of this article is NOT that the Sony a6000 is better than the Sony a7R. Obviously the Sony a7R is better. However, to make the most of your camera, you need to use the RIGHT LENS for your camera body. In that regard, you can’t say whether a lens is good or bad without knowing which type of camera it will be used for. Therefore, when choosing a camera or lens for 360 photos or virtual tours, you really ought to consider the camera and lens as a pair, rather than individually. And if you care at all about resolution, circular fisheyes, no matter how sharp they may be, are actually not an ideal choice for 360 photos for virtual tours.  Cropped fisheye lenses can take photos that are much higher resolution, with the same number of shots.  For some suggested camera and lens pairs, check out this post.

Take your virtual tour 360 photos to the next level: Everything you want to know about NODAL NINJA (plus: 10% discount code)
DSLR vs. mirrorless, full frame vs. APS-C: which is the best camera for 360 panoramic photos?
Comment