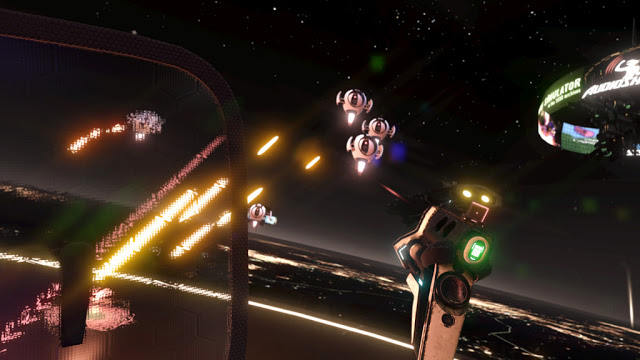 ​
If there is one app that really sold me on the HTC Vive (reviewed here), I would have to say it’s Space Pirate Trainer, which got a major update today, and a 25% discount for a limited time!

Space Pirate Trainer is a wave shooter where you stand on a platform wielding two guns, as you are attacked by waves of flying drones.  Besides being able to change your gun type, you can also switch either gun to a shield to help you withstand the onslaught.   SPT also features bullet time dodging.  As the drones fire at you, time slows down, enabling you to dodge their attacks, just like the Matrix.
It’s a fun way to use the HTC Vive’s room-scale VR, and SPT has remained among the best selling games for the Vive. 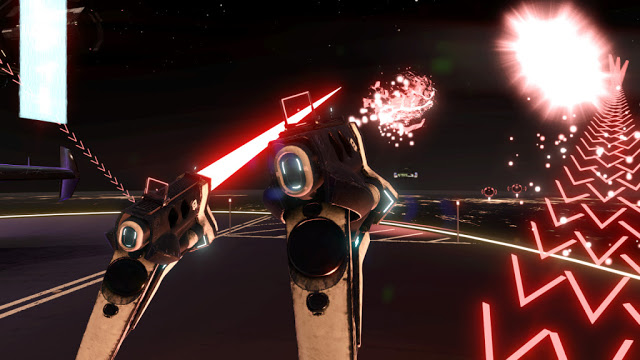 Today, SPT got a major update.  Check out some of the upgrades:
– new weapon: Volton, a lightsaber-like weapon that allows you to hit the lasers back at the droids.  It also converts to a plasmalink, a whip-like weapon that can take a droid and smash it against the ground (or on other droids).
– new weapon: ion grenade launcher.  Press the trigger to launch a grenade, then press the trigger again to detonate.
– new weapon: shotworks (like a shotgun)
– powerups: shield, machine guns, homing bullets, gravity field and missiles
– new enemies
– party mode (limit the gameplay to a number of games or minutes) with a party mode scoreboard
– VR Sense: when a drone fires outside of your view, the screen will flash subtly
– statistics at the end of the game
– better framerates
– graphics tweaked (new gun models and textures, particle and weapon effects)
– supersampling and antialiasing options in the menu
If you’re finding SPT too easy, there are additional challenges for you:
– bullet time effect now becomes weaker as your level increases
– hardcore mode (no bullet time)

Here’s a video to whet your appetite!

To celebrate this update, SPT is 25% off only until this Thursday, 4pm Pacific Time!